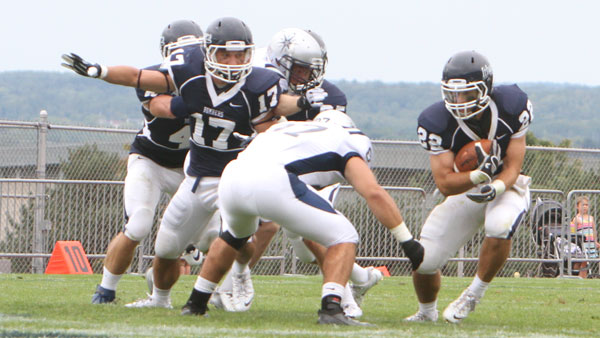 Brian Pulling/The Ithacan
Junior corner back Sam Carney runs with the ball as senior safety Joe Armeli moves to make the tackle during the game against Moravian College on Sept. 7 at Butterfield Stadium.
By Christian Araos — Staff Writer
Published: October 22, 2013

The football team’s superlative defense has propelled the team to a 5–1 record and second place in the Empire 8. The Bombers control their own destiny when it comes to clinching their first NCAA Tournament berth since 2008. But in order to get there, they will need their offense to find consistent success.

The Bombers offense is last in the conference in total yards, scoring and yards per play. They have won two games with touchdowns in the final three minutes. But in those two games, the Blue and Gold recorded just nine second-half first downs combined. That’s nine first downs in one full game for the Bombers — a polar contrast to the 22 they had throughout their win against Alfred University on Oct. 12.

The Blue and Gold have three conference games remaining. If they win all three, they will make the NCAA tournament. The three game gauntlet begins with a meeting against St. John Fisher College this Saturday at Butterfield Stadium. The Cardinals and Bombers each have one conference loss on the season, and a second conference loss would likely end Ithaca’s shot at making the NCAA Tournament.

The Bomber defense has kept the team in every game it has played this year, limiting opposing offenses to just 13 points per game. Only Buffalo State College’s offense was able to score three touchdowns against the South Hill squad’s defense. Hartwick College and Utica College also each scored three touchdowns, but both of them scored a touchdown on defense. Head coach Mike Welch said the defense is being overworked by the offense’s inconsistency.

“We need to get better [on offense],” Welch said after the Bombers’ win against Utica. “We can’t put that much pressure on our defense, although they responded well. We had about three or four three-and-outs, and they came in and kept [the Pioneers] out of the end zone.”

Some of the consistency struggles on offense can be attributed to injuries. Senior quarterback Phil Neumann will likely miss his third straight game because of an elbow injury which occurred during the Bombers 21–9 loss to Hartwick on Oct. 5. Junior running back Tommy Pedula has missed three games because of injuries. Though both were expected to be major contributors to the Blue and Gold’s offense, neither of their injuries have crippled the offense.

Senior Rakim Jones was the starting running back coming into the season and remains in the spot. However, Jones has had his fair share of ups and downs this season, epitomized by his performance last weekend against Utica. Jones rushed for 87 yards and a touchdown but was also benched for much of the second half after committing two fumbles. Jones returned late in the fourth quarter for three consecutive carries, which culminated with junior quarterback Tom Dempsey finding senior tight end Jared Prugar in the end zone for the winning touchdown. Jones said the offense needs to keep working in practice to find success.

“We work hard in practice,” Jones said. “We just need to have it develop in the game. Everything that we’re doing practice, we’re going to keep doing it in the game, and eventually it’s going to come out in the game.”

The greatest change at offense has been Dempsey replacing Neumann as quarterback and leading the Bombers for two straight wins. Dempsey has completed more than 57 percent of his passes in the two games, throwing four touchdowns and committing only one turnover. He said the offense needed to adjust to the Pioneers’ changes during a second half in which it only recorded one first down before its game-winning drive.

Despite the success and the upcoming meeting with Fisher, he remains grounded.

“Obviously it’s a big game, and they’re a very good team,” Dempsey said. “It’s just another game. We take everything one game at a time.”

If the offense can find success on Saturday, the team will be a step closer to “just another game” — in the NCAA Tournament.