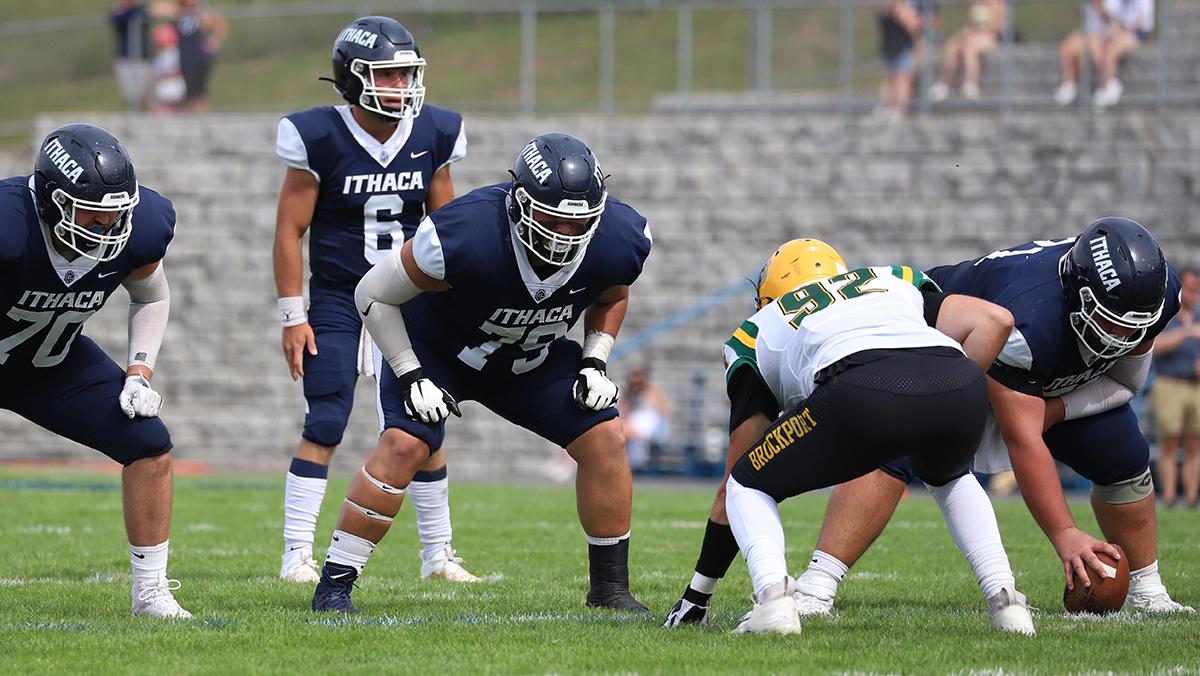 The historic season saw Villanueva and the Bombers finish undefeated in the regular season for the first time since 1986, as well as clinch their first Liberty League Championship. On top of that, the team made the NCAA tournament and reached the National Quarterfinals for the first time since 2003 before falling to the No. 1 North Central College Cardinals, 48–7.

Since joining the program in 2018, Villanueva has powered the college to a 36–9 record. With his commitment, Villanueva became the 153rd all-time All-American selection for the football program and the first to earn back-to-back selections by the Associated Press since Daegan Gray ’90 in 1987 and 1988.

“I’m honored, man, that’s really all I can say,” Villanueva said. “It was awesome to play for such a well-renowned program in Ithaca. With our coaching staff, teammates and supportive staff, all five of my years at Ithaca were a great experience that I’ll cherish for the rest of my life.”

Villanueva added that he could not have been an All-American alone — he needed the help and teamwork of everyone else in the program.

“I’m nothing without my coaches and my teammates,” Villanueva said. “They’re constantly pushing me to be the best that I can, supporting me whether I play really good or bad. They’ve just helped keep me grounded.”

Offensive coordinator Sean Reeder said Villanueva’s commitment to the program is unmatched and that he will leave a big hole with his departure.

“Jake has had a huge impact on the program,” said Reeder. “He was a part of my first recruiting class in 2017 and he’s really been indoctrinated into everything we strive for as a program. It’s been really rewarding to see his growth all the way through the process and being a part of such a great senior group.”

Reeder also said Villanueva’s work ethic is what the program strives to model itself off, and it is not about how you get the job done, but that you get it done.

“He has been instrumental in setting the tone for the culture, as well as the rest of the senior class,” Reeder said. “Modeling that behavior is vital to what we do. The standard is the standard at the end of the day and he’s been able to model how to get it done, setting the bar high for our program as a whole.”

Another player from Reeder’s first recruiting class was fellow graduate student offensive lineman Brendan Martin. Martin said he and Villanueva have been close ever since their first practice in 2018 and working alongside Villanueva was one of the best experiences of his career.

“We’ve spent a lot of time together, our offensive line position group is close-knit and really has been these last five years,” Martin said. “We were roommates and we’ve been great friends since our freshmen years.”

Martin also said playing alongside Villanueva removed a lot of pressure from his game, allowing him to play the way he does best.

“Playing next to him has made my job so much easier,” Martin said. “When we play next to each other our great friendship has led to great communication on the field to run our plays. Since we have that great chemistry and communication, we’ve done really well on the right side.”

Reeder said that as the team played more games together, the players only got better each week.

“I was very excited for all of our accomplishments as a team this year,” Reeder said. “That’s where some of those individual awards came through.”

Finishing his final season with the team, Villanueva said there were several memories he will cherish from his career.

“The Cortaca Jug Game in 2019 was definitely one of the craziest experiences of my life when we broke the Division III attendance record,” Villanueva said. “Winning the Liberty League Championship this year was something that we had been working for since our freshmen years. It felt so good to finally achieve our goals.”

Above all, Villanueva said he will remember the time he spent with his teammates the most, allowing him to have an enjoyable experience as a football player in college.

“I had a great experience overall playing and you don’t hear that too often with college football players nowaday[s],” Villanueva said.