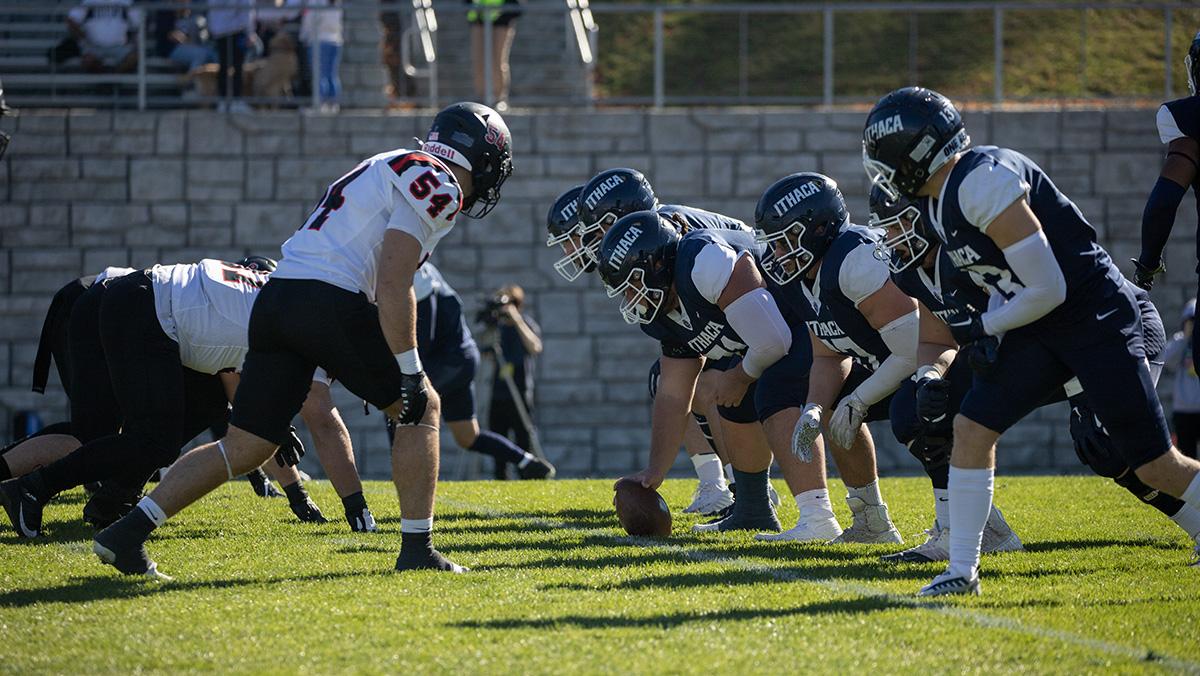 Xiaoyi Zhang/The Ithacan
The Rensselaer Polytechnic Institute Engineers line up against the Bombers during their game Oct. 29. The Bombers won the matchup for the first time since 2001 en route to a 12–1 record.
By Tommy Mumau — Senior Writer
Published: December 7, 2022

The Ithaca College football team put together a season for the record books this fall, posting a 12–1 overall record. The Bombers’ season came to a close Dec. 3 as the team fell to the No. 1 North Central College Cardinals 48–7 in the team’s first national quarterfinals appearance since 2003.

The 2022 Bombers achieved many milestones throughout the campaign, posting the program’s first undefeated regular season since 1986 and its first-ever Liberty League title. The team reached these marks by dominating the opposition, winning five games by a margin of 40 points or more. The South Hill squad’s historic season was led by first-year head coach Michael Toerper, who joined Mike Welch ’73 as the second head coach in program history to reach the NCAA tournament in their first year at the helm. Welch’s first season was in 1994, where he posted a 10–3 record and reached the semifinals.

“I think this is a group that has set the bar and the standard for years to come,” Toerper said. “Not just because of the results that they’ve earned on the field, but by the way that they work as a team off the field and support each other and do whatever it takes to do their one-eleventh in this program, no matter how many snaps they’re playing. That selfless we-over-me mentality has really shined so bright with our leaders in this program.”

Wingfield in particular was a catalyst for the program’s success this year, passing for 1,744 yards and 16 touchdowns in the regular season. These impressive credentials not only provided the quarterback with Liberty League honors, but he was also named a semifinalist for the Gagliardi Trophy that “recognizes excellence in athletics, academics and community service,” according to an announcement from the football team.

Wingfield said he is humbled to receive this recognition and attributes his successful season to the support he has received from his teammates and coaches, including Toerper and Mike Hatcher, associate head coach and special teams coordinator.

“It means a lot,” Wingfield said. “I try to just play within myself and do what I’m coached to do, and all the guys around me have made that really easy for me. So, it’s definitely an honor and something I’m pretty proud of.”

Along with the awards presented to the program’s players, Toerper and his staff were named  Liberty League Coaching Staff of the Year. Toerper was also named the American Football Coaches Association Region 1 Coach of the Year on Dec. 6. Welch said he followed the program this season and was impressed by how the coaches led the team from the sidelines.

“I think [Toerper] has done an exceptional job,” Welch said. “[He has] been consistent with his message of playing and practicing each day. … [He has] a wonderful staff that loves Ithaca and coaches very well on all sides of the ball.”

This year, Toerper led the Bombers to a 34–17 win over SUNY Cortland at the Cortaca Jug game Nov. 12, which was held at Yankee Stadium. That was the highest margin of victory since the Bombers won 48–20 in 2017.

The Bombers had been knocking on the door of the postseason the previous four seasons under former head coach Dan Swanstrom, going 8–3 from 2017 to 2019 and logging an 8–2 record in 2021. Despite being a highly competitive program, the NCAA selection committee did not choose the team to be in the NCAA Championship during these seasons. Wingfield said he was impressed by the team’s efforts to make a strong postseason run this fall.

“Last year was kind of heartbreaking, two losses that held us out of the playoffs,” Wingfield said. “We came into this year knowing, like, ‘Listen, like, we could do this.’ … We’ve kind of known from the beginning that this is a special group and one that could do exactly what we’re doing, and it’s been really cool to see it all play out.”

Bahamonde said he enjoyed competing with this squad while making history in the process.

“It’s been so much fun, like above everything else,” Bahamonde said. “We’re just so close as a group and everyone’s really bought into this. … This group has been building together for years now and for time to finally come to this and this be the product of all that hard work is awesome.”

DeSimpliciis echoed a similar sentiment, saying that the team was further motivated to continue its postseason run because of the bond the group has.

“All of us are so close,” DeSimpliciis said. “We have a good time playing with each other, we’ve been saying … the whole operation is [to] keep this team together. So like, we just want to play ball with each other as long as possible.”

The Bombers’ 20th NCAA tournament appearance in school history marked their first time in the dance since 2014. The team did not disappoint in its first tournament game in eight years, emphatically defeating the University of Massachusetts Dartmouth 63–20 Nov. 19 at Butterfield Stadium for the program’s first postseason win since 2013.

The South Hill squad then defeated Springfield College 31–20 in the second round Nov. 26 on South Hill, after facing an early 10–0 deficit. Senior linebacker Jason Haber said he was pleased with how the team displayed its ability to battle back in the pivotal matchup.

“I think the resiliency of this team is just incredible,” Haber said. “We [got] down early in the game against Springfield, [and] you look around the sideline, no one flinched. We were ready just to play our game; I think this team is just very well-rounded.”

Despite the group’s season coming to an end in the quarterfinals, the 2022 Bombers delivered one of the top seasons in program history. Toeper said he was happy to help the team to return to the postseason, maintaining its tradition of success.

“For the alumni, I know they waited a long time to be in the national tournament [and be] competitive in the national tournament because the standard of this institution and this football program is so high,” Toerper said. “I’m just proud of our team that they’ve done the necessary steps prior to all these games, to have that type of success and make the alumni proud.”