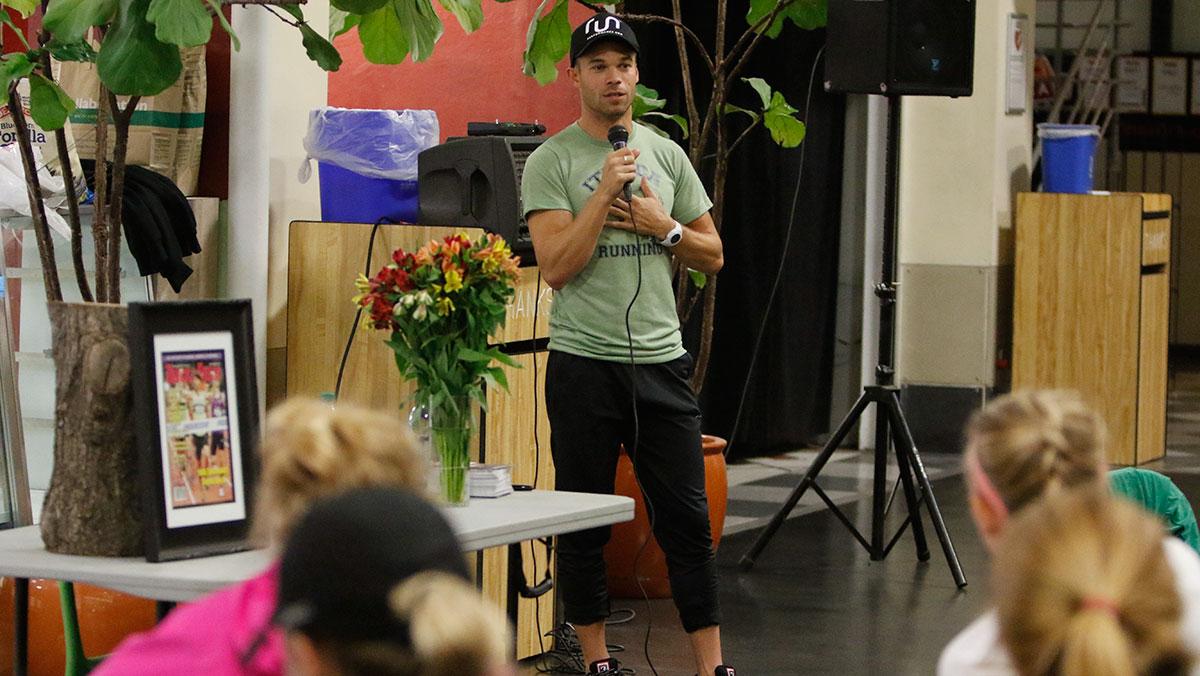 Alexis Liberatore/The Ithacan
Nick Symmonds talks with fans during a Q&A session on Sept. 29 at the Finger Lakes Running & Triathlon Company. Many Ithaca College student-athletes from the women's cross-country and track and field teams were in attendance.
By Jonathan Beck — Sports Editor
Published: September 30, 2015

Nick Symmonds, a two-time Olympic track and field runner, visited Ithaca on Sept. 29 for a meet-and-greet session with fans, including Ithaca College student-athletes, presented by the Finger Lakes Runners Club.

The event, which consisted of a 3-mile run with the attendees and an hour long Q&A session following the run, was hosted by Finger Lakes Running & Triathlon Company.

Individuals who attended the event, which was free and open to the public, were able to get autographs and photographs afterward.

Symmonds is in the midst of a series of appearances for ProRunnerTalk, a company he endorses, around the New York metropolitan area over the course of the next few weeks.

Gary McCheyne, co-owner of Cayuga Music Shop and a member of the eight-person committee that approved Symmonds to come, said they had been talking about bringing Symmonds to town for a while.

“Our runners club is pretty large in town,” McCheyne said. “It falls right into our mission statement of promoting health and fitness through running.”

The 2012 Olympic star, who finished fifth in the 800-meter in London, is a seven-time NCAA champion at Division III school Willamette University. He is also a five-time 800-meter champion for USA Track and Field.

Symmonds, who most recently defended his national title in June, said he’s had three major injuries in his career, including an avulsion fracture in his knee that forced him to sit out the entire 2014 season.

During his down time after missing six months, he created a product called Run Gum, a caffeinated performance gum brand. Symmonds said the injury was frustrating for him and led him to the idea.

“For me it was a big learning process,” Symmonds said. “People always say there’s a silver lining, but sometimes you need to create that silver lining for yourself. And that’s what we do with Run Gum.”

The Brooks-sponsored athlete is known as an advocate for athletes’ rights, animal rights and lesbian, gay, bisexual and transgender rights, as well as holding the beer mile record in the United States, finishing four beers and running four laps — or 1 mile — in a time of 5:19.

McCheyne said it means a lot to the community for Symmonds to take time to come and speak.

“It makes a lot of the younger people here see that there is life. You can continue to work hard,” he said. “You don’t meet these people every day.”

Juniors Emily Drain and Lauren Hodge, along with head coach Jennifer Potter and many others, were at the event asking Symmonds questions about balancing the life of a collegiate athlete.

Senior Opal Bogdan, who participated in the run and attended the event afterward with head coach Jennifer Potter and her teammates, said seeing Symmonds was inspiring, especially coming from a Division III school.

“I was really surprised that so many runners showed up just to take part in the run,” Bogdan said. “It was horrible weather, yet I saw runners varying from high school athletes to this old guy who toughed it out for the whole run. It was cool to see so many different people come together.”

On how Symmonds handled the question-and-answer part, McCheyne said he did a great job and it is a testament to the type of person he is.

“Some speakers get a little strange around a lot of questions, but Nick was wonderful,” he said. “And now being willing to sit through an autograph and talk to people, I think that says as much to him as it does to the fact [of the] interest in the community for him.”

Symmonds said he draws his inspiration from the fact that he loves the lifestyle of running and he appreciates being able race in over 31 countries.

“I liked being good at something,” Symmonds said. “I get to travel the world running. I just want to keep doing this as long as I can because it’s such a great way to spend a day.”