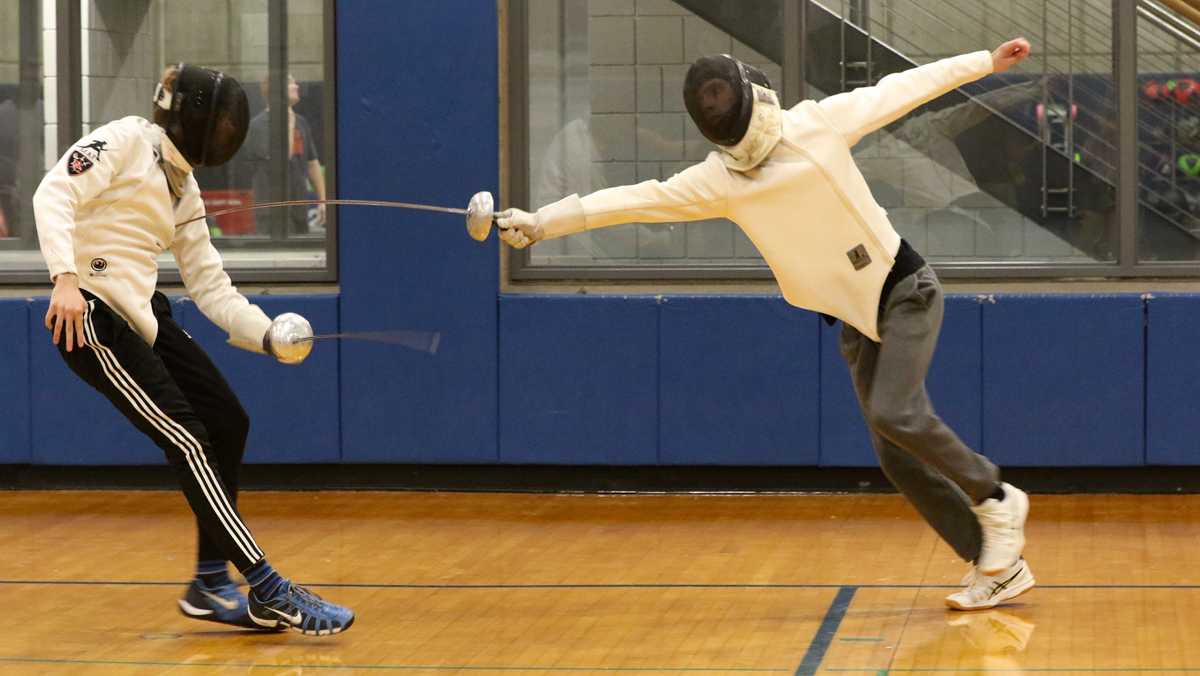 It is 9:30 p.m. Sept. 13 when the Ithaca College Club Fencing team begins its second practice of the season in the Fitness Center. Pop music is blaring from the speakers belonging to the circus club practicing in the corner. And, despite the gym being filled with acrobatics and bass-blaring music, sophomore president Ben Cafaro is focused. Tonight’s fencing practice is about one thing — footwork.

Lined up in two horizontal rows, the eager new members — who have never fenced before — listen to Cafaro’s instructions, mimicking his every move. “Back straight. Forward two steps. Backwards one.”

As his instruction continues, Cafaro shouts, “Lunge. Hold it,” as the students freeze, hoping to perfect their form.

The club fencing team emphasizes teaching beginners about the sport, not just competing and winning championships. Cafaro said approximately 80 percent of the new members of the club are starting this year with no fencing experience.

“Once you learn the footwork and you get that down, it’s the most crucial part of fencing,” Cafaro said. “Because, for every single weapon in fencing, it’s the same footwork. Advancing, retreating, lunging — you start that first and hone that in.”

While the origin of fencing is contested, it is known that fencing was used in medieval military training. The modern fencing manifested into what it is today at the end of the 19th century after the sport was modified by a French fencing school. The first official fencing association was the Amateur Fencers League of America, which was formed in 1891, followed by the Amateur Fencing Association of Great Britain in 1902.

Cafaro said the romantic history of fencing attracts people to the sport.

“It was not only seeing it in the Olympics but the fact that I was really into knights and castles and such,” Cafaro said. “Having the opportunity to use a sword and fight someone safely and learn the techniques properly is really fantastic. It has such a legacy and such an old sport with a fantastic history, and that’s what draws a lot of people into it.”

In fencing, there are three different events — saber, foil and epee — with the main difference being the target areas an opponent can hit.

In saber, the main targets are the mask, arms and body, and it is typically the fastest paced out of the three. In foil, it’s the body, chest, shoulders and back that opponents have to hit with their blades. In epee, anything can be the target, causing it to be the slowest paced because there is more space to hit. 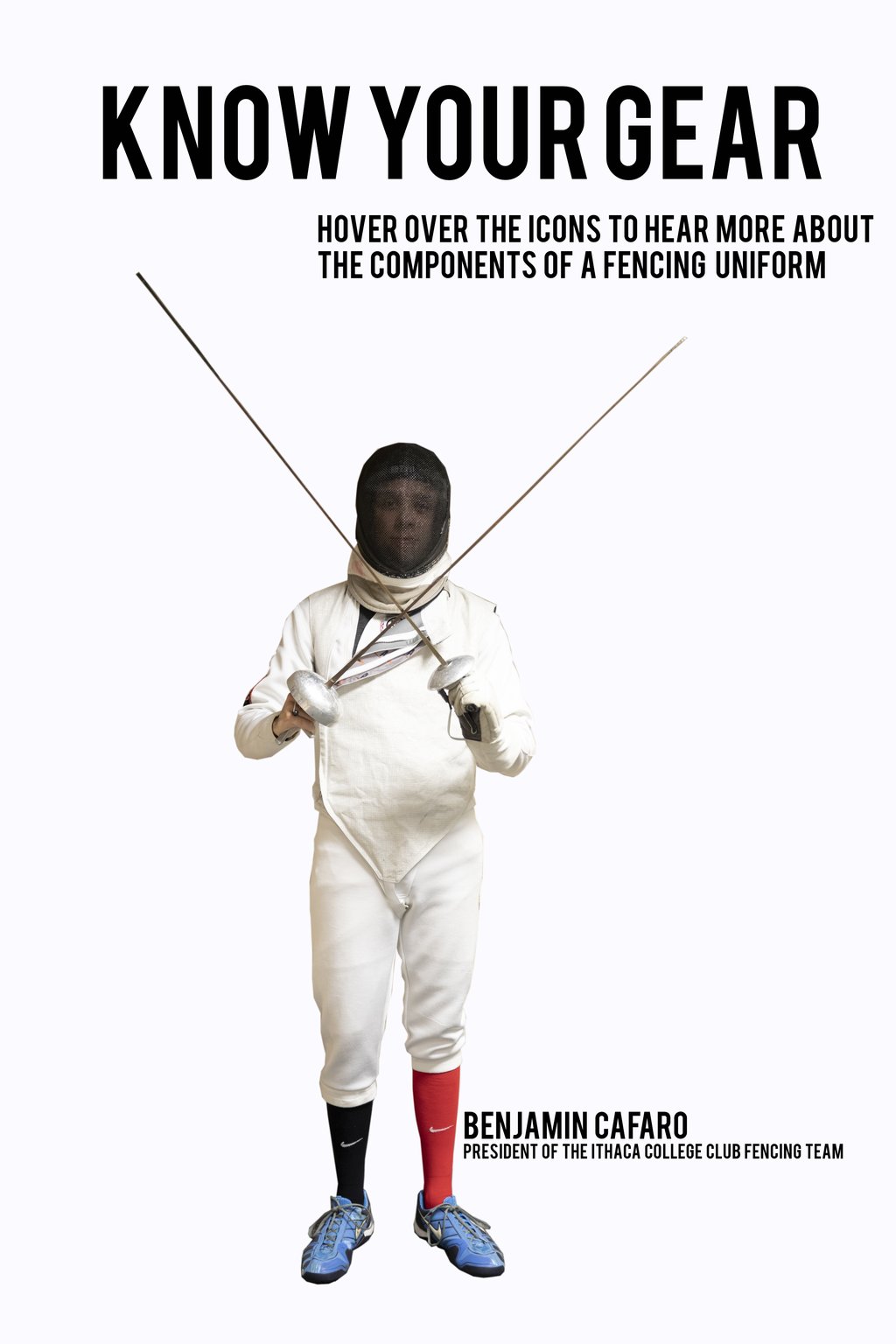 Students line up to start the rigorous exercises that begin every practice. Squats, 30-second planks, jumping jacks and lunges get the new members prepared for fencing practice.

“So much of fencing is misconstrued as just swinging blades around,” junior epee coach Lucas Hickman said. “If you ask any coach or fencer, they’ll say that footwork and physical fitness is 70 percent of the sport. Being able to be quicker on our feet, being leaner, means less target area. It’s all very important to the sport.”

After the exercising, fencers are finally able to try out the weapons and get used to some of the gear they will have to wear for bouts.

All fencers have to wear a mask when they compete, which changes depending on the discipline of fencing. They will also wear an all-white jacket, knickers and socks that go to the knees.

The blades will change depending on the event the fencer is competing in. Both foil and sabre blades can weigh just over one pound, while the epee blade can be as heavy as a pound and a half. The end of the blades are flat and somewhat fragile — they bend and sometimes break.

Even though the blade is not sharp, fencers can still get hurt when competing.

“There’s always a chance of getting bruises on your arms if you get hit in the area that isn’t as covered as the target area,” Cafaro said. “Oftentimes, you’ll see people getting bruises on their legs when they first start because if they are fencing people around the same skill level, their blade control can be off, and they can hit off target sometimes.”

A crucial part of fencing is wearing a lamé, an electronic piece of copper that a fencer wears on their body chord. The cord gets plugged into both fencers’ blades, and when someone gets hit, it connects a circuit that triggers a light that tells the fencers if they hit on target. The lamé is necessary so no one is confused about whether or not someone got hit in the correct area.

The team does not follow the traditional executive board arrangement that other clubs do. Even though there are official positions on the board, student coaches teach the new members how to fence. Cafaro is the foil coach, Hickman is the epee coach and sophomore Emily Kwan is the saber coach. Cafaro and Hickman each have at least 10 years of fencing experience, while Kwan has fenced for five years.

Even though fencing is an individual sport, Cafaro said the team dynamic is also important.

“It’s a really nice environment,” Cafaro said. “No matter what skill level they are in fencing, they are there to just have fun and enjoy it. Everyone is friendly to each other, and we try to help each other.” 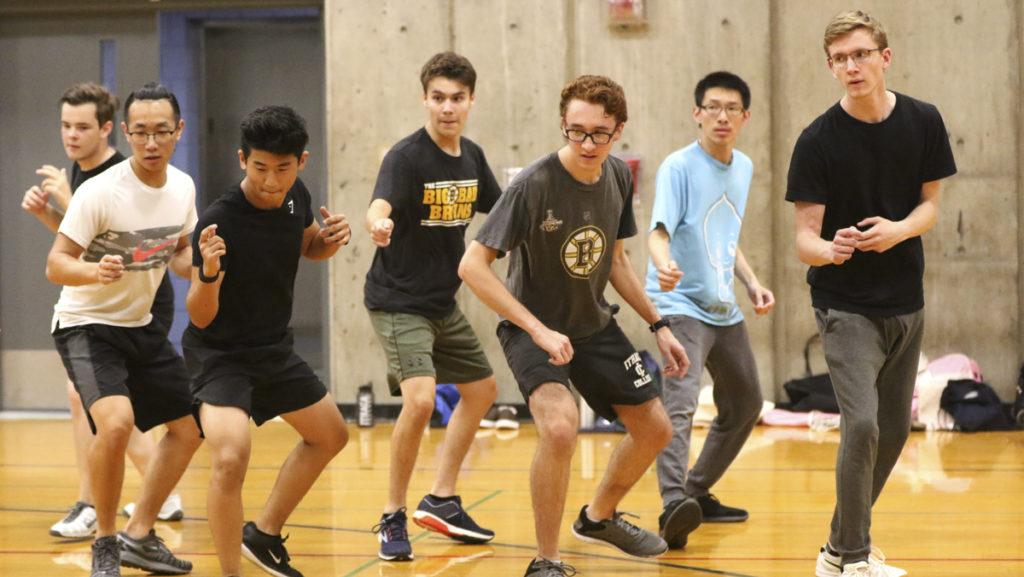 Members of the Ithaca College Club Fencing team practice their footwork and lunging during the team’s practice. The club’s first tournament will be Sept. 29 at Binghamton University.

The team competes in three tournaments every year against other colleges, which are typically pool tournaments that turn into a bracket. A fencer can win a tournament by scoring the most points throughout the bouts. A point is scored by hitting the other person in the correct target area with the blade.

When a fencer faces everyone in their pool, they compete to five points over three minutes of play. When fencers get ranked into the bracket, it’s a bout to 15 points that lasts over three sections of three minutes.

Cafaro said competing at tournaments provides everyone the opportunity to get accustomed to the style and atmosphere of the sport.

“There’s this respect and an acquaintance kind of thing,” Cafaro said. “You know you’re in a niche sport, and you know you should be friendly with each other. There’s a level of respect and sportsmanship in the game that makes it unique.”

For sophomore Kemi Odumosu, the attraction of learning a completely new sport out of her comfort zone drew her to join the club.

“It’s medieval to me almost — like knights do it,” Odumosu said. “I want to be good enough that I can show off to my friends that I know how to do this really cool thing.”

The first tournament the club will be taking part in is Sept. 29 at Binghamton University. Cafaro said he hopes that everyone in the club focuses on having fun.

“We really focus on just showing people what fencing is and letting people have a good time and enjoy the sport,” Cafaro said. “It’s a sport you can do for your whole life on a recreational level or an extremely competitive level. Our goal is just to teach people it, let them have fun and give them the proper gear and equipment they need to play the sport.”