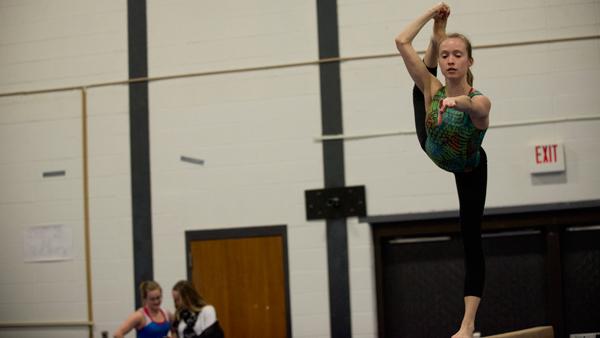 The mats have been broken down as the Hill Center and the gym have been emptied for the final time of the 2013 gymnastics season. The only thing that stands between the Bombers and the goodbyes to their teammates is one final meet March 22, the National Collegiate Gymnastics Association Championships.

The Bombers finished this past weekend 5th overall out of six teams in the Eastern Collegiate Athletic Conference Championships. The results do not qualify them as a team, but the IC squad will still send 10 individual athletes to represent them at nationals, more than any other team in the Eastern region.

Sophomore Valerie Cohen said though the team did not qualify, the Bomber pride will be well represented at the national meet.

“We are looking forward to making the best of it, because it wasn’t the ideal situation, but we are going to make it like we are a team,” she said.

When the 2012 season closed, the South Hill squad lost six graduating seniors, including Ithaca’s most decorated gymnast, Jessica Bolduc, ’11. With the return of graduate students Christine Niles and Tiffany Grube, along with the addition of seven freshmen for the 2013 season, the team had a completely new dynamic.

As the season began, the Bombers saw this struggle affect their overall performance. Even with the new team, they knew they had the potential to pass 181.100 as an overall score, which they failed to do for the five weeks of competition.

Senior Chelsea Robie said with such a new team, they did struggle to create the team unity they had in the past, but once they began bonding, they got the push they needed.

“Our biggest obstacle was to become a team, because a lot of people didn’t know each other like last year,” she said. “Once we got a couple meets under our belt, we definitely came together, and we did the best we could do.

The following week of competition, the team competed in the Harriet Marranca Invitational, the team’s invite meet and the seniors and graduate students final competition in the Hill Center. Standing at 0–9 on the season, the squad came out excited and ready to compete, pushing them to a season high 186.025 points overall.

“We [had] an absolute blast and took it in for all it was,” she said. “It paid off, because we ended up winning the team championship, and a lot of people won individual awards, and that propelled us into the mindset of ‘Oh, we can really do this.’”

Falling just short for the two remaining meets of the season, the Bombers still had their eyes on the prize heading into ECAC competition. With a fifth-place finish shutting them out of team competition, Cohen said the South Hill squad gave this meet their all as if it would be their last time competing.

“We just wanted to perform to the best of our ability, because in gymnastics you have no control over who wins or loses,” she said. “Even though the results weren’t exactly where we wanted to be, we fought until the very end, which was an accomplishment in and of itself.”

The Bombers will head to the National Collegiate Gymnastics Association Championships to compete both Friday and Saturday in Whitewater, Wis. With their goals set high, Niles said the team is eager as ever to represent the team on the biggest stage of the season.

“We are all so ready, because all of our skills are at their peak,” she said. “We have been saying we wish nationals were now because we just want to compete.”