On Feb. 18, 2018, the Ithaca College women’s tennis team faced the University of Rochester in its season opener. While the Bombers fell 2–7 to the Yellowjackets, then-sophomore Jane Alkhazov competed in an extremely competitive sixth-singles match against Rochester’s then-freshman Julia Steinberg that lasted for over two hours. When Alkhazov woke up the next morning, she could not lift her right arm at all. 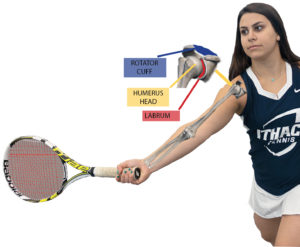 Alkhazov tore her labrum, the cuff of cartilage between the humerus head and the rotator cuff.

Alkhazov was diagnosed with a torn labrum, which is a cuff of cartilage located in the shoulder that is adjacent to the humeral head and below the rotator cuff. The injury immediately ended her second season with the Bombers. She said the injury occurred as a result of her intense overhand serve that she used at the beginning of her career. She said that the constant overhead motion from the serve led to her gradually wearing away her labrum over time and that the long duration of the match led to the tear.

“It was definitely the repetitive serving motion,” Alkhazov said. “I have a history of when I am serving, my shoulder will pop out of place. While it puts a little extra speed on that ball, it is not good.”

This was not Alkhazov’s first shoulder injury in her tennis career. In the past, she had torn her rotator cuff, which is directly above the labrum. Alkhazov said the injury to her labrum was definitely impacted by her previous shoulder injury.

“The shoulder is already one of the most unstable joints in the body,” Alkhazov said. “Any kind of injury to it creates a higher risk of reinjury to it.”

Though tearing her labrum led to a lengthy recovery time over her offseason, her background as a student in the six-year physical therapy program at the college helped guide her on how she should be recovering properly. She said she was able to take what she was learning in the classroom, especially in an anatomy course she took last summer, and transfer it to what was happening in her body.

“In [physical therapy] classes, we learn about all kinds of musculoskeletal injuries, and one of the first things we did learn about was the upper extremities,” Alkhazov said. “This involves the rotator cuff, shoulder and all of the different anatomical things that are there. With anatomy, over the summer, I was able to see it on the human body. Conceptualizing what was there in front of me was what was happening in my body helps me put things into perspective and identify the problem and how to solve it.”

Barbara Belyea, clinical professor and associate chair of the Department of Physical Therapy, said that while having a physical therapy background will help a patient in their recovery period, seeking an outside opinion is crucial in recovering as quickly and proficiently as possible.

“Sometimes, we are injured in a way that we can’t treat ourselves,” Belyea said. “Sometimes, similar to physicians, we make the worst patients. We think we know what is wrong, and we might be missing something in our clinical decision making that a colleague would pick up on.” 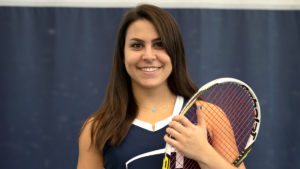 Alkhazov has torn her labrum and rotator cuff during her tennis career.

“Most physical therapists will provide a home exercise program because we acknowledge that people are busy and may not have the time to see us, as well as insurance dictating how often a patient can see us,” Belyea said. “It is a critical piece of what we do as physical therapists. It is an important piece for people to be able to integrate their therapy into their daily routine.”

Alkhazov was able to return to the Bombers Sept. 15 at the Ithaca Invitational. She said that though she dropped both of her matches, it felt great to be back on the court and competing again helped her get out of the mental struggle that a significant injury can cause.

Since her returned, she has had to adjust her game slightly. She previously focused on the pace of the ball on her serves but has taken a different approach to serving since her injury.

“My serve took a hit because I was scared to go my full speed and tear my labrum more,” Alkhazov said. “I picked up a one-handed backhand and an underhand serve with the help of Coach Austin.”

Tennis head coach Bill Austin said Alkhazov has added these shots to her repertoire so that she is not doing the same motions as consistently, thus reducing the risk for reinjury.

“The underhand serves allow her to keep from rotating the shoulder up high and irritating the rotator cuff, so it reduces stress on the area,” Austin said. “The one–handed backhand was to keep reduce pain in the hand [and] wrist of the left hand associated with hitting with two hands, so we worked on changing her grip and worked to have her contact the ball farther in front of her.”

Alkhazov said the one-handed backhand return and the underhand serve help her create more backspin on the ball that cause an unusal bounce when it makes an impact with the ground that can throw off an opponent. Austin said that as Alkhazov has improved her strength and gotten back to full health, she has been able to bring back elements of her old game. Still, he said that these new returns in her arsenal add depth to her game.

“She has been healthier this year,” Austin said. “She goes to these techniques only when she needs to, but it has added to her repertoire of shots.”

Alkhazov has participated in all five spring matches for the Bombers and said she has felt better mentally since returning full time to the court.

Junior Brianna Ruback said that having Alkhazov back helps the team both on and off the court. She said that her presence makes each day more enjoyable.

“Jane is a super supportive teammate,” Ruback said. “Even though she has had several different injuries, she is always there to support everyone, and she is always cheering super loudly. She has a really overall supportive presence and has been there for the team.”

Ruback said that she appreciates Alkhazov’s background in physical therapy, as it allows her to seek out advice for recovering from injuries that affect tennis players on a daily basis.

“If something is bothering me, I would go to her,” Ruback said. “She has a lot of knowledge on recovery and staying healthy and injury prevention. I think it’s good to have teammates who have a background in this field to add additional support from the perspective of a student.”

Alkhazov said that while injuries like a labrum tear can affect the mental state of an athlete, maintaining a good attitude and following directions is the best strategy for having an effective recovery.

“It’s just about staying positive and keeping up with your rehab,” Alkhazov said. “Being down on yourself isn’t going to help. Everything is temporary.”