Sophomore wrestler solves a Rubik’s Cube before his matches 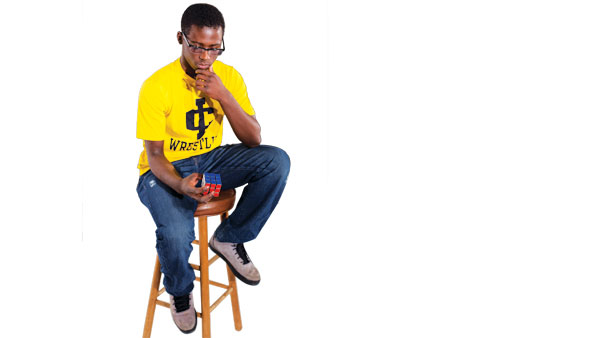 It’s 8 a.m. on Saturday morning, and sophomore wrestler Henry Beaman is already counting down the minutes to his first match of the day. To ease his nervousness, he begins the routine he has followed all season: First, he syncs his six favorite songs on his iPod. Next, he packs a peanut-butter, jelly and banana sandwich on a cinnamon raisin bagel for after the weigh in. Finally, but most importantly, he grabs his Rubik’s Cube, the three-dimensional puzzle that helps Beaman get his head in the game before every match.

Pregame rituals are commonplace in both professional and collegiate-level athletics. A routine will help some athletes in preparing themselves mentally for their performance. Some athletes like to listen to music or picture themselves as the winner of their upcoming game.

A Rubik’s Cube is not a typical pregame workout. Minutes before his match, Beaman is getting focused while listening to his music. Rubik’s Cube in hand, he is twisting and turning the cube in movements so quick that anyone watching cannot keep up.

“I listen to a set of motivational speeches, and then I have a set playlist of six songs that I listen to right before my match,” he said. “Once those six songs go on, I’m in the zone; nobody talks to me. I’m just getting ready to go. Then probably five or 10 minutes before the match, I’ll solve my Rubik’s Cube to get my mind going.”

Beaman has had a similar routine since he began wrestling at Niagara Falls High School. As a senior in 2012, he was named most valuable player of the team. Using the Rubik’s Cube during this time, Beaman’s mentality was focused before every match. He said he decided to bring that routine with him as he began wrestling collegiately. As a freshman last season, he said he wasn’t performing as well as he wanted.

“Last year, I had a 3–9 record on the season,” he said. “It blew me away. When I first got here, I thought I was going to be the man. The first two weeks, I was wrestling with Alex Gomez and [assistant coach] Ricardo Gomez, and they used to beat on me every single day. I came in thinking that I was great. I was doing absolutely nothing.”

However, Beaman said the process of solving the cube has helped him come into a positive mental state right before a match.

“I have a cube that can be twisted and turned into millions of different combinations, and I can solve that between a minute and two minutes,” he said. “I have all the tools to solve this cube just like I have all the tools I need to go out there and win.”

Beaman’s teammates have rituals as well. Junior 125-pounder Anthony Cabrera said he says a prayer before his matches. Senior heavyweight Shane Bartrum and Beaman also share their own routine of warming up together.

“It’s just a little thing that we have going,” Bartrum said. “We hand fight and drill. He really gets me moving, and it gets him warmed up because I’m a bigger guy that he has to move around.”

Bartrum said though Beaman’s routine is a little stranger than most, every wrestler should incorporate some type of mental clearing into their rituals before a match.

“I realized in previous years that if I got too pumped up, I would go out there and just screw up the whole game plan,” he said. “A lot of wrestlers get psyched out by looking across the mat at their opponent and shaping them up. The biggest part is trying to remain calm.”

As head coach of the wrestling team for 17 years, Marty Nichols is no stranger to pregame rituals. Though he doesn’t recall any as specific as Beaman’s, he said he applauds the sophomore for having a routine and continuously performing it before a match.

“He’s got something there,” Nichols said. “We’ve never had anybody do a Rubik’s Cube. It makes it easier for him to go into the match with an open mind. If that works for him, it’s great.”

Nichols said having a ritual alleviates the pressure to win a match. He sometimes sits wrestlers down if they do not have a routine and stresses its importance. Nichols used a metaphor to explain how a wrestler’s mentality can mess up his focus before a match.

“When you’re going out to perform, there’s always the devil and the angel on your shoulders,” he said. “One is telling you that you’re not good, not ready and that you haven’t worked or trained hard enough. But the other is the one you have to listen to, the one that is telling you how good you are and that you have worked hard to get on the mat. We try to tell the guys that that’s where they need to be.”

One way Beaman demonstrates his commitment to wrestling is by lifting weights and training. Along with his pregame ritual, staying in shape is also part of his routine, Beaman said. On competition days, Beaman begins with a high-intensity aerobic workout in a sweatshirt and sweatpants, to help drop down to his competition weight of 125 pounds.

“I have to work hard every single time I’m in the weight room, every time I’m doing sprints, every time I wake up for a morning jog, anything I have to do had to be done hard and right,” he said.

Beaman said wrestling is satisfying because it is something that he is working on all day, every day. He does not experience any down time from training.

Beaman said people are often surprised when he tells them he is a collegiate wrestler. He said they do not understand why someone would want to be cutting weight and training all the time. The struggle to stay motivated can be overwhelming at times, but he credits his love for the game as the reason why he has continued to compete.

“It teaches you respect, discipline and that you have to sacrifice things in order to get to your goals, whether it is just one match or a national championship,” he said. “It teaches you the things you need in life other than any other sport. I can’t go once a week or once in a while to get good. That’s what this sport has taught me. The love of the sport keeps me going every single day.”