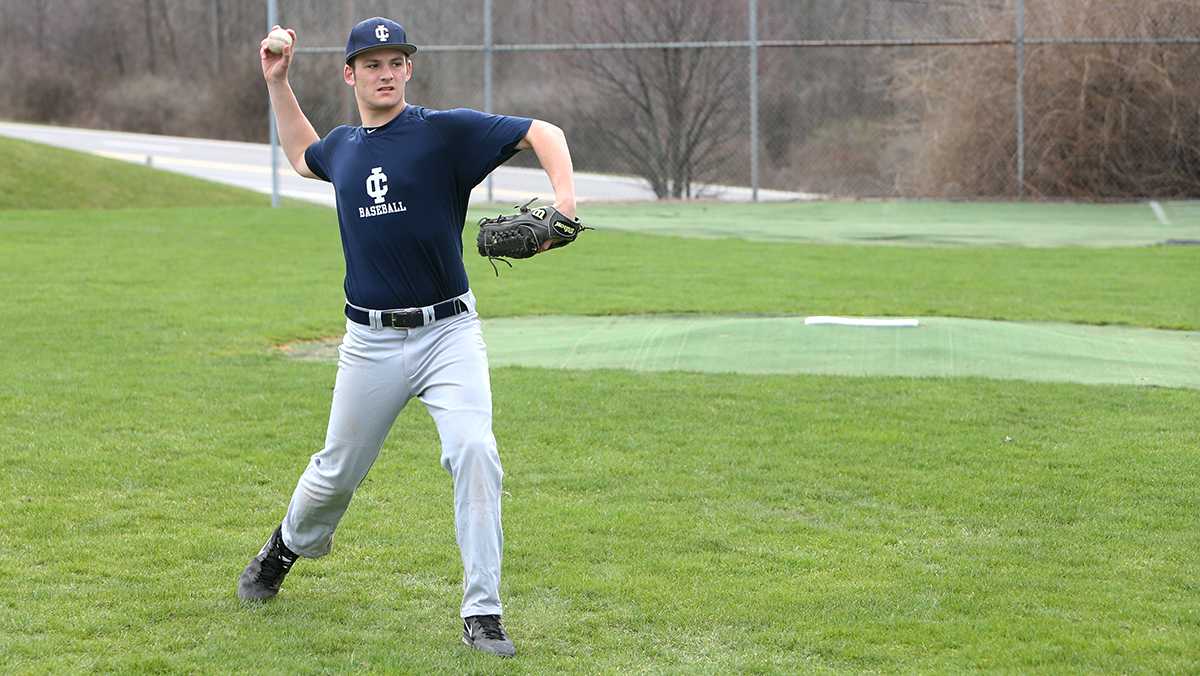 One of the most highly regarded and notable Major League Baseball pitchers in the 1960s up until 1974 was Tommy John. Although he pitched until he retired after the 1989 season, John is most recognized and remembered now for something he shares in common with Bombers fifth-year starting pitcher John Prendergast.

John and Prendergast both received what is now known as Tommy John surgery.

John missed the entire 1974 season due to ulnar collateral ligament reconstruction surgery. He was the first to undergo this procedure, and many pitchers at all levels of competition have also received the same treatment.

Prendergast required the surgery on his right elbow, which is his pitching arm, after the first game he pitched for the Bombers in the 2015 season, his senior year. He underwent Tommy John surgery April 9, 2015 approximately one month after the injury occurred. 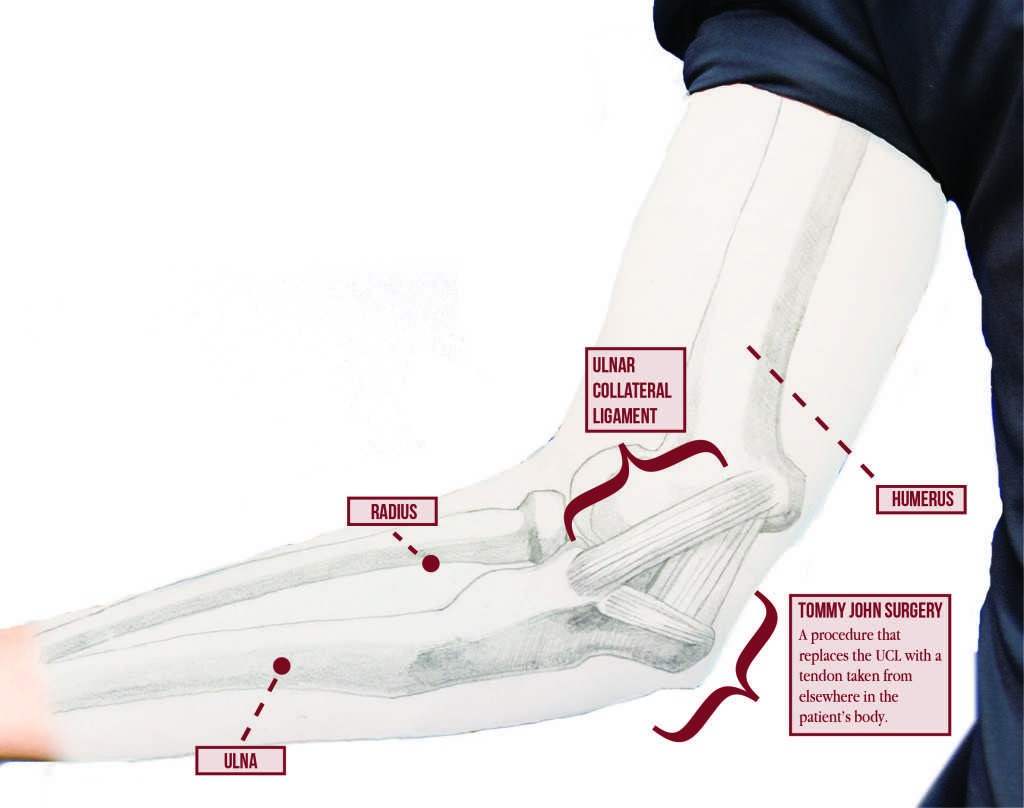 Tommy John surgery has negatively impacted careers and is feared among most pitchers in the game. Without the surgery, Prendergast would not have been able to continue pitching and would have had limited arm mobility. The surgery can negatively affect pitchers because of the long recovery time, as it takes about a year to return to full strength. In the MLB alone, a record 36 pitchers in 2012 underwent the procedure.

Prendergast said he questioned whether or not he would return to the pitcher’s mound since it was his fourth year as an undergraduate. Luckily for Prendergast, he remained enrolled at Ithaca College for a fifth year to pursue his master’s in business administration. He said he was not about to let his athletic career end due to a blown elbow.

“I was just thinking about my future and if I could figure out a way to play for Ithaca,” Prendergast said. “I knew they had an MBA program, but I didn’t know much about it. After I got hurt, I weighed all my options, and that was the first thing I looked into.”

Since he only pitched one inning in the 2015 season, he was able to use his final year of NCAA eligibility in the following season.

In his freshman season, he led the Bombers in both innings pitched and strikeouts. His performance that year earned him the Empire 8 and Eastern College Athletic Conference Upstate New York Rookie of the Year honors.

Prendergast said his career highlight was during his sophomore season when the Bombers went to the Division III World Series. The Blue and Gold had a record-setting season, going 41–8, and lost in the semifinals in 13 innings 5–4. Prendergast was the starting pitcher that game. He worked eight innings and gave up three runs, of which only two were earned.

This season, Prendergast has pitched a total of two innings in only one game against Claremont Mckenna College, Harvey Mudd College and Scripps College, which together form the Stags baseball team, March 15. Although Prendergast is still not a part of the starting rotation, head coach George Valesente said he hopes to add him to that rotation by midseason.

Immediately after surgery, Prendergast was put in a cast, followed by a brace that restricted movement. As recovery time went on, he said his doctors and trainers gave him more and more leeway with the brace until he reached full extension.

During Tommy John surgery, part of the procedure is performed by using a tendon graft to replace the UCL. Doctors normally take the palmaris tendon, located in the forearm, from the patient. Prendergast is one of the few people who does not have a palmaris tendon, so his tendon was taken from an alternate option: from his knee.

For the first stage of recovery, Prendergast said he spent the majority of his time lying down to rest both body parts operated on.

“The first two weeks are rough,” Prendergast said. “You can’t walk, and you can’t use your right arm.”

The pain from the minor procedure done on his knee went away after roughly two weeks. As for his elbow, he said, as physical therapy progressed, his arm felt better.

Prendergast said he is almost back at full strength and that the recovery process could overall take up to a year.

“It takes a while because the first five months are just like doing actual rehab with your arm,” Prendergast said. “And then probably in October, I started throwing a baseball again, and you just kind of slowly add more pitches incrementally and kind of do a throwing program.”

Despite the loss of Prendergast, the Bombers were still able to win the Empire 8 Conference and end the season with a 20–14 record. However, Valesente said it was devastating to lose their No. 1 pitcher for that season.

“It really set us back considerably,” Valesente said. “We did recover, but not as well as we would have liked.”

“After watching him dominate for the previous two years, it was tough to watch him go down with his injury in the first game,” Diorio said.

Valesente said Prendergast stands a chance to be the wins leader in pitching for Bombers baseball.

“He’s won 27 games in three years, which averages to nine wins a year, which is outstanding,” Valesente said. “He’s been a mainstay ever since he came in as a freshman and has continued to be a tremendous pitcher at our level.”

When recruiting Prendergast, Valesente said, his competitiveness and mental toughness strongly stood out.

“He was very competitive, and he’s a bulldog on the mound. He had a presence about him that carried him very well,” Valesente said. “He had the ability to know how to pitch. He wasn’t just someone who winds up and throws the ball and hopes that it goes in a certain area. He has a specific idea and a plan when he was pitching and approached it that way, so that was very impressive.”

Although the team lost one of its starting pitchers, Diorio said it allowed for other pitchers to step up into a larger role.

“It’s almost impossible to replace somebody who had nearly 30 wins in his first three seasons, but we had guys like Andrew Sanders who stepped up into the ace position and threw great all year,” Diorio said. “We’re all excited to see John back in action this season.”

Until Prendergast is fully recovered from battling Tommy John surgery, Valesente said, he will put him in a few games for an inning or two and move from there.

“It’s just a matter of how he feels,” Valesente said. “It’s sort of a day-by-day kind of thing. Actually, I rely mostly on what he says and how he says it, and what he believes is good for him.”