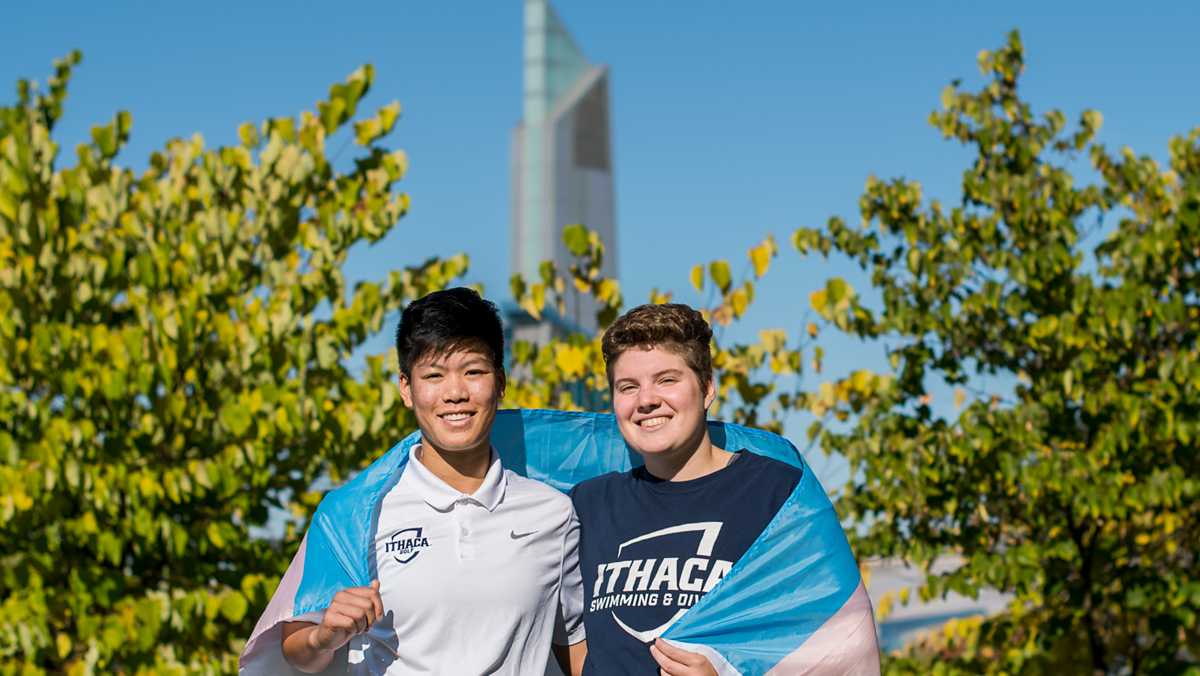 Junior golfer Alex Perry said he knew he was a transgender male when he was 12 years old after watching a documentary on YouTube about a transgender adolescent. However, when he committed to play for the Ithaca College women’s golf team during his senior year of high school, Perry knew he would not be able to fully transition any time soon.

“I came out to my mom, and I was like, ‘I don’t think I can really do anything because I had to choose between golf and being trans,’” Perry said. “I came to school under the same name and used she/her pronouns my first year.”

Perry is one of two openly trans varsity athletes at the college. Junior swimmer Cody Conte identifies as transgender masculine, and the two have become close friends since they met approximately a year ago.

The college does not have a men’s golf team, so Perry did not have the option to compete with his gender identity. In May 2018, after Perry’s freshman year on the golf team, Perry reached out to Will Rothermel, associate director of athletics, and golf head coach Keith Batson about transitioning publicly. For Perry, this meant using he/him pronouns, changing his first name to Alexander and wearing longer shorts than his female teammates. However, he cannot begin the process of physically transitioning because of NCAA regulations that would prevent him from competing with women. 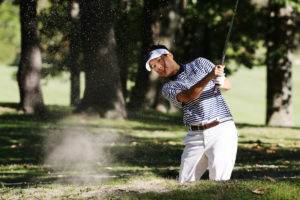 Junior golfer Alex Perry hits the ball out of a sand trap during a practice Sept. 12 at the Country Club of Ithaca.

Perry said he has been interested in pursuing hormone treatments since he came out and has struggled to decide between fulfilling his identity and continuing to compete with the college’s golf team.

“For a while, I didn’t know if medical transition was something that I wanted, but I think golf getting in the way just really clouded my vision,” Perry said. “I was very close to walking away last fall, and it was a very tough decision, but I felt that the community was what made me decide to retain my eligibility.”

Perry said he is still deciding if he will continue to compete on the golf team for the upcoming spring season or if he will begin medically transitioning.

The NCAA adopted its current inclusion policy for transgender student-athletes in 2011. The policy establishes separate rules for transgender men and women. Gail Dent, NCAA associate director of external affairs, said via email that the policy is currently being reviewed for potential updates and that discussions will take place later this year or early in 2020.

Under the current policy, trans males transitioning from female are able to compete with either gender as long as they are not undergoing hormone treatments. Once they start taking hormones, they immediately become ineligible to compete on a women’s team, but they can receive a medical exemption to compete on a men’s team while using hormones. Hormone supplements are banned by the NCAA as performance-enhancing drugs.

Trans females transitioning from male are eligible to compete for a men’s team regardless of hormone use. They cannot compete for a women’s team until they have completed a full year of testosterone-suppression treatment. Research cited by the NCAA in its policy indicates that most physical changes that affect athletic performance occur within the first year of hormone treatment.

Conte said that in high school their men’s and women’s swim teams practiced together and felt like a single team. They said that having separated teams in college made their gender dysphoria more jarring than before.

“People referring to the team as a whole as ‘ladies’ or ‘Lady Bombers’ really bothered me,” Conte said. “I didn’t know why it bothered me so much.”

Conte said prominent trans athletes like Schuyler Bailar, a former Harvard University swimmer, gave them the confidence to accept that they could be both transgender and an athlete. Bailar was the first Division I athlete to compete with his gender identity. He is now a motivational speaker and advocate for LGBTQ athletes with over 74,000 followers on Instagram. He said he hopes to show transgender athletes and youth that they can be themselves and still do the things they love.

“When I was growing up and coming out as transgender, I was looking all over the place for somebody else like me,” Bailar said. “Nothing was coming up, and I concluded because of that, that this wasn’t possible. I don’t want another kid to do that. Your identity does not have to rob you of your passions.”

Paula Miller, Ithaca College women’s swimming and diving head coach, said she had never worked directly with a non-cisgender athlete before Conte. She said that changing Conte’s pronouns and monitoring her use of gendered terms was challenging at first but that having Conte on her team has been eye-opening.

“It takes time,” Miller said. “I really understand their situation and what they’re trying to accomplish, and they’ve been wonderful and very open.” 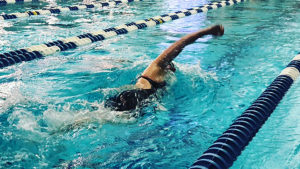 Conte said the swim team’s support was essential to their transition. Conte began using they/them pronouns with the team during Fall 2017, and they decided to change their name to Cody after experimenting with using it among their teammates. Conte also struggled with their mental health during Fall 2018 as they attempted to define their identity. Miller said she saw Conte’s performance suffer as a result.

“You could tell they weren’t into it,” Miller said. “There was no joy. They had no goals. We knew they were struggling, but this is a wonderful support group. This year coming back in, their attitude has been so much better. I feel like we’ve gotten the real Cody back.”

The Office of Intercollegiate Athletics established its official diversity and inclusion policy in 2019. Perry is the varsity sports senator for the Student Governance Council, and he sponsored a bill last spring that called for the athletics office to add a policy regarding transgender student-athletes to its webpage. The policy addresses allowing athletes to express their gender identities through names and pronouns, locker room and bathroom use, travel and uniforms in accordance with NCAA regulations.

Perry is also a member of the Student-Athlete Advisory Council, and he worked on the policy with Erienne Roberts, associate athletic director and senior woman administrator, throughout Spring 2019. Roberts said she met with Perry every two weeks to discuss the policy until it was complete.

“When I leave here, I want this policy and this awareness to benefit future varsity athletes,” Perry said. “I don’t think that anyone should have to stop playing the sport that they love just because they’re concerned about their eligibility.”

Roberts said the athletics office communicates the inclusion policies with visiting teams and outside groups utilizing the college’s facilities for sporting events, although she said the current policy does not directly address recreational sports at the college.

“Coaches have not only been accepting but really proactive,” Roberts said. “A lot of questions that we had before the policy came from coaches asking, ‘What do we do when we have teams that are visiting?’ When we have transgender student-athletes, their teams have already embraced them, so a lot of it has been the visiting side.”

The college is currently the only school with a perfect ranking from the Campus Pride Sports Index. Roberts is a member of the LGBTQ community, and she said that having representation on campus for minority groups has allowed for the inclusive environment within the college’s athletics office.

“Students just recognizing that I hold this seat allows them to be more comfortable with who they are and in their skin,” she said. “Just them seeing somebody who looks like them or represents a protected class that they’re a part of allows their voices to have a little bit more courage. That’s where I get the most pride about it.”

Conte said one of the most significant challenges they face as a trans swimmer is with the gendered uniforms. Because they have not had any gender confirmation surgeries, they are still required to wear a women’s swimsuit. Conte said they often wear a drag suit at practice, which is a loose mesh men’s-cut swimsuit used to slow swimmers down for training purposes. They said this allows them to feel like they are wearing a men’s suit even though it is worn over top of their one-piece.

Conte is scheduled to have top surgery in May 2020, after which they will be able to wear a men’s swimsuit. Conte said they are not sure if they will wear the men’s suit after surgery. They said the coaches were supportive of allowing them to wear the suit in practice and of pursuing special permission from the NCAA for them to wear it during meets.

Top surgery will provide its own challenges for swimming. Conte said they will have to wait six weeks after surgery to do any exercise. They also said many people choose not to put their arms above their heads for up to a year after top surgery to avoid stretching the scars. However, Conte said they plan to begin swimming again six to eight weeks post-surgery.

“I don’t have any worry that I won’t be able to swim because I’m going to make sure that I’m able to,” they said. “People are so worried about stretching the scars, but my surgeon said, ‘The scars are going to stretch anyway, so do what you want to do.’”

Conte said that being a member of the women’s swim team has helped them feel more comfortable with taking their transition one step at a time.

“Something I want to put an emphasis on in my classroom is just being respectful of others and making sure that LGBT kids are included and know they can be successful,” they said. “Everybody’s different, and that is an okay thing.”