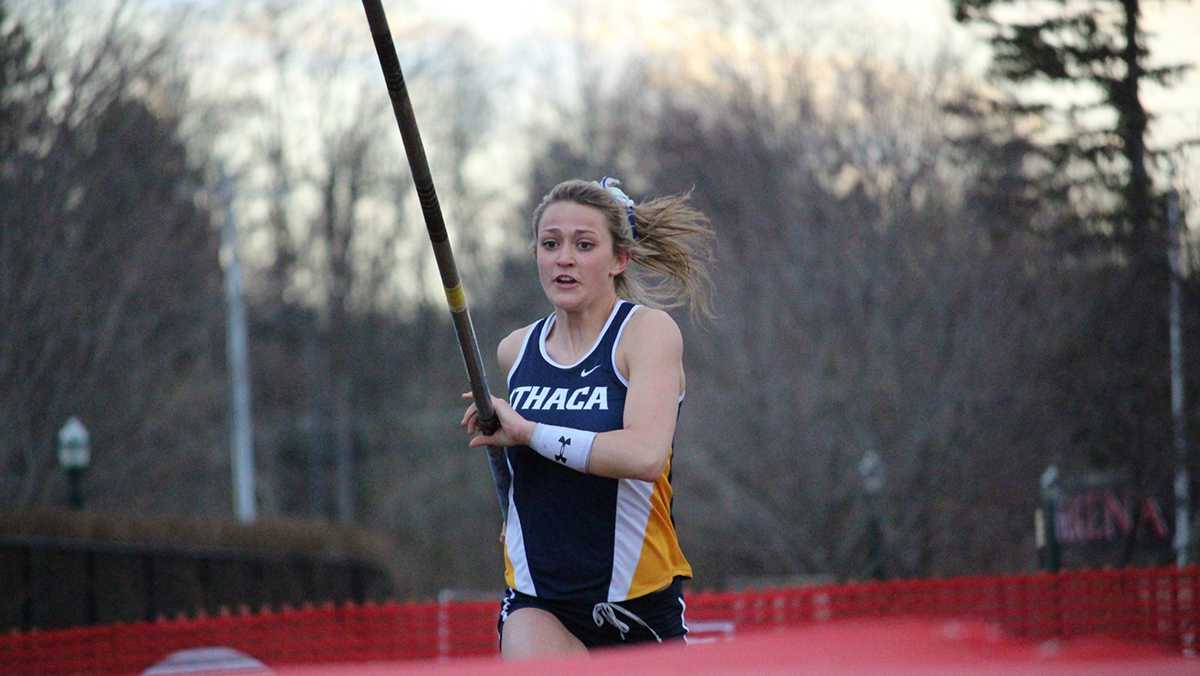 Starting a new sport while in college is no easy task.

For junior Katherine Pitman, her transition from the Ithaca College gymnastics team to the women’s track and field team last year was exciting, as she now holds a current school record and qualified for the Division III National Championship last outdoor season.

Pitman was a member of the college’s gymnastics team her freshman year, but after numerous minor injuries set her too far back in the season, she turned to a completely different sport her sophomore year: track and field.

After she was tested in multiple events, assistant coach Matt Scheffler, who specialized in pole vault, said he pointed out to head coach Jennifer Potter Pitman’s potential in pole vaulting when she first made the team. Scheffler said the upper body strength she had developed as a gymnast would help her in the pole vault event.

“She is very athletic,” Scheffler said. “She has great jumping ability, she’s very fast, and her height as well. Also what helped was her background in gymnastics.”

Potter said she trusted Scheffler’s initial judgment on Pitman’s performance during the pole vaulting test and handed her a uniform.

“He has been around long enough and done it long enough to look at when someone picks up a pole and is on the runway and tries it out to notice that they have potential,” Potter said.

Even though her potential in the event showed, Pitman said the transition was nowhere near easy. Regardless of the experimental nature of last year, she said it was still fun. She entered the sport with a positive attitude and told herself that she had nothing to lose.

“I wanted to learn something new, and I knew pole vault was a more natural transition for gymnasts because of that spatial awareness and that air awareness you have from gymnastics,” Pitman said.

Pitman has competed for two seasons of track and field so far, one indoor and the other outdoor. She claimed the college’s record for outdoor season with a 3.72–meter jump at the 2015 New York State Collegiate Track Conference Outdoor Championships from May 1–2. She placed first in the meet and helped the college take home first place.

Pitman said she is fortunate that she was allowed to join the team without any prior experience, which is uncommon for track and field athletes, and she had coaches who guided her and teammates who supported her throughout the transition.

“I never went in expecting to get a school record,” Pitman said. “I can’t even describe how great they are, and to say it is my school record is not fair.”

She said her school record is more of a team effort than anything.

Senior Alex Rechen, who also holds a college record in the pole vault with the highest jump during the 2014–15 indoor season with the same height of 3.72 meters, helped coached her, Pitman said. Rechen said the two of them are beneficial to each other.

“I love training with her,” Rechen said. “Especially since she’s faster than me, I work to keep up with her. For me, this is my eighth year pole vaulting, so I can take her through a couple drills, and it’s really nice to have that extra set of eyes.”

“Alex is such a role model for me, and she helps me out in every way, and we push each other. At the same time, we have such a good dynamic together,” Pitman said.

Pitman and Rechen were two of the eight members of the women’s team to qualify for the outdoor Division III National Championship last season. This was Pitman’s first time qualifying and Rechen’s first time outdoor and second overall. Pitman had just missed placing to earn All-American honors. She placed 10th at Nationals, and Rechen was not far behind, placing 19th.

“The both of them had every opportunity to score, but pole vault is one of those events where anything can happen,” Potter said.

Moving on to this season, the next step, Pitman said, is to develop her technique. Scheffler said this season she could get that down solid, while last year they worked on her physical ability.

“Last year was all about feeling things out and testing the waters. I was on the faster side, a little bit on the stronger side, and I had the height to get up on big poles and kind of sit over the high bar,” Pitman said.

Potter said she has seen a tremendous difference in the way Pitman sprints. She said at first it was obvious to tell Pitman was a gymnast by the way she sprints down the pole vault runway, which is similar to a vault runway in gymnastics. The movement and positioning of the arms as well as the stride and speed during performance differs. Now, she has become more fluid in a pole vaulter’s sprint, and this slight adjustment can help her approach an overall technique in the event.

Since it is something she has never done, Potter said she feels Pitman has a different approach to the sport compared to other girls who have been competing for years.

“This is a totally new world for her, and I think that’s why she has been so successful because she really had no expectation,” Potter said.

Now that Pitman is a returner and has a better concept of pole vault and track and field, she said she has set high but attainable goals for herself this season, such as attaining All-American status and hitting the 4-meter mark.

“Joining this team could have been a negative experience, but it was the complete opposite,” Pitman said. “I had all the support in the world. I had such great leaders on the team.”