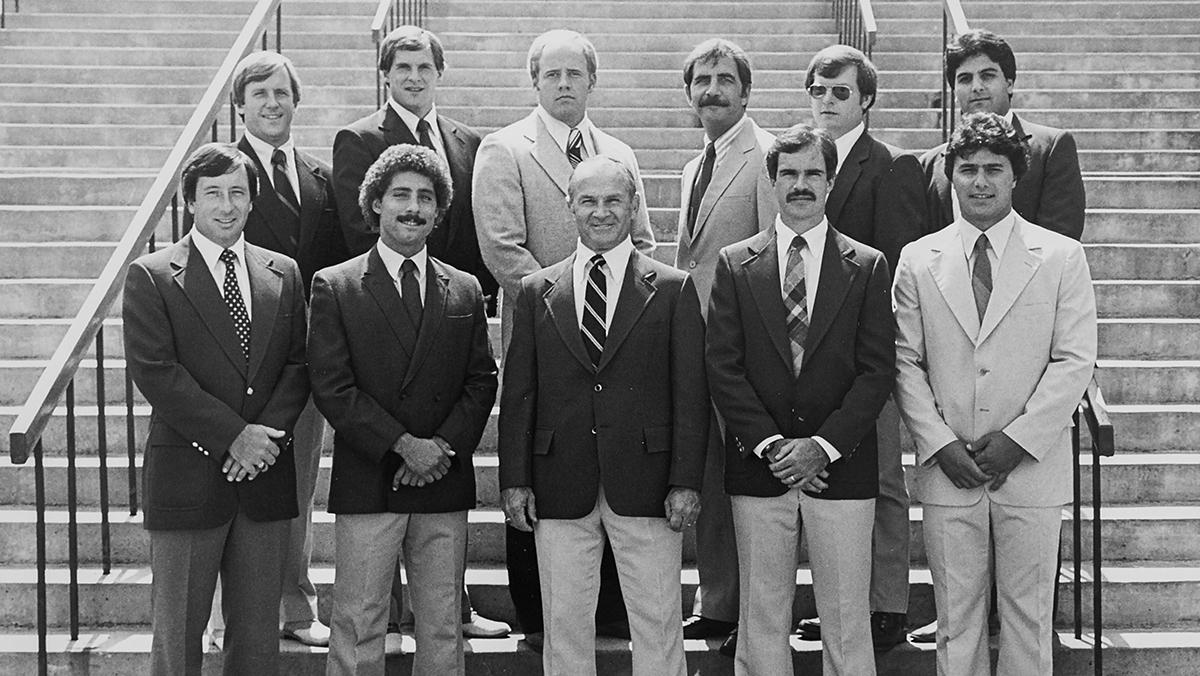 COURTESY OF OFFICE OF INTERCOLLEGIATE ATHLETICS
Gary Bucci '76, second from the left on the bottom row stands with the 1982 football coach staff and along side head coach Jim Butterfield. He became the assistant coach in 1977.
By Caitie Ihrig — Sports Editor
Published: April 19, 2017

Gary Bucci ’76 has a long history at Ithaca College. During his time at the college, Bucci played both baseball and football. After graduating, he became an assistant coach for the football team, working with the receivers from 1977 to 1983 under head coach Jim Butterfield and from 2001 to 2006 under head coach Mike Welch. He will return as an assistant coach for the Bombers again in the 2017 season.

During his time off from coaching, Bucci was an employee at the David Long Appraisal Company, of which he is now the president and owner.

Sports Editor Caitie Ihrig spoke with Bucci about coming back as an assistant coach, what he is most looking forward to and what his experience was like as a Bomber.

Caitie Ihrig: Why did you want to come back as the assistant coach at Ithaca College?

Gary Bucci: Coaching never gets out of your blood, and it was a good time for me, like business and my family, to come back. The school means an awful lot to me. … I played as the football program came into prominence, and really, all athletics at that time took really a turn upwards. I just wanted to get back and have these kids have some of the same experiences that I had as a player and as a coach.

CI: Can you describe your experience coaching under Coach Butterfield and Coach Welch?

GB: Coach Butterfield — and I think all the guys who played for him can attest that, next to their fathers and maybe, in some cases, more than their fathers — he had more influences on their life than anyone. He was a task master, but also, he cared so much about his players and about the school. He really helped everyone to come here as boys and leave here as men and how to go about doing things the right way and to have respect and to work hard and to know that doing things the right way will make good things come. Of course, Coach Welch and I were teammates, and I coached with him. It’s just sort of carried over, that tradition of Jim Butterfield, that tradition of doing things — and really, the players and their commitment and their makeup really hasn’t changed much. I told our kids that the other day. We are the same, and that’s why we continue to succeed, is because they are Ithaca College kids and the kind of kids who want to come here and be a part of a great program and a great tradition. It’s been that way since I came here in the ’70s, and I hope I can help to continue to bring that to this year’s squad.

CI: Why did you decide to take a break from coaching for a while?

GB: My kids were getting older — I went back and coached them in high school — and they are both Division I lacrosse players, and one is graduated and now coaching at the Division I level, and one is playing now. I also purchased my company. It was a business decision from going from an employee to an owner — it changes things a little bit — and to spend more time with my kids and developing them both on and off the field.

CI: What are you most looking forward to with being back with the Bombers?

GB: I have a great sense of pride when I step on that field, being a former player and a coach. It’s a feeling that’s hard to describe. I’m hoping not to rekindle that feeling, but to help these kids realize that and realize where they are and hope that it is still in them. The pride that I have in this program and for this school, that to foster that as they go on through their careers and even after, and hopefully, I can give them a little bit from coach Butterfield and coach Welch and help them set their life patterns.

CI: What is it like playing for a team and then coaching the same team?

GB: Going back to the pride, especially with the success we had as a team when I was playing and then the immediate success that I had as a coach, we had a lot of success and a lot of NCAA tournaments and national success and making it to the national championship game and winning the national championship game. There’s an immense amount of pride involved in that. I owe the school and the football program for the way I have become as a person and the way I handle myself and raise my family and handle my day-to-day business. I owe a great deal to the school and to the program and the baseball program because I did play both sports there.

GB: Once the change was made and coach Dan Swanstrom was hired, I connected with him and offered my services in any way that I could to help this program. Being a former player and a former coach and being here since the dawning of the new era in Ithaca College football, I felt I could offer something to the program.

CI: What are you hoping to gain from this job?

GB: I’m hoping that we continue to win. When you’ve only had three coaches since 1958 and two of those coaches were there 20-plus years, it’s a shock to the community and the former players that a change was made. You know it’s inevitable — people can’t coach forever. It was the right time for coach Welch, and now there’s a new coach. I’m hoping I can just help coach Swanstrom develop a championship program and that our kids can succeed on the field and off the field.

CI: What is your coaching style?

GB: I really like to master technique — I think if I can break down the play and the techniques that are needed to succeed in that play, to execute that play. I am big on execution. I really want to reach the kids mentally as to what needs to get done and how they need to approach achieving their goals and to achieve success.

CI: What are you most looking forward to this season?

GB: Getting back out there. Helping to bring this team together — they’ve only known one system and one coach, and it’s a change, and change is hard for some people. We are trying to create excitement and confidence in the players and a positive attitude and really continue to have success and carry on this tradition of this great program as it’s recognized throughout the country.