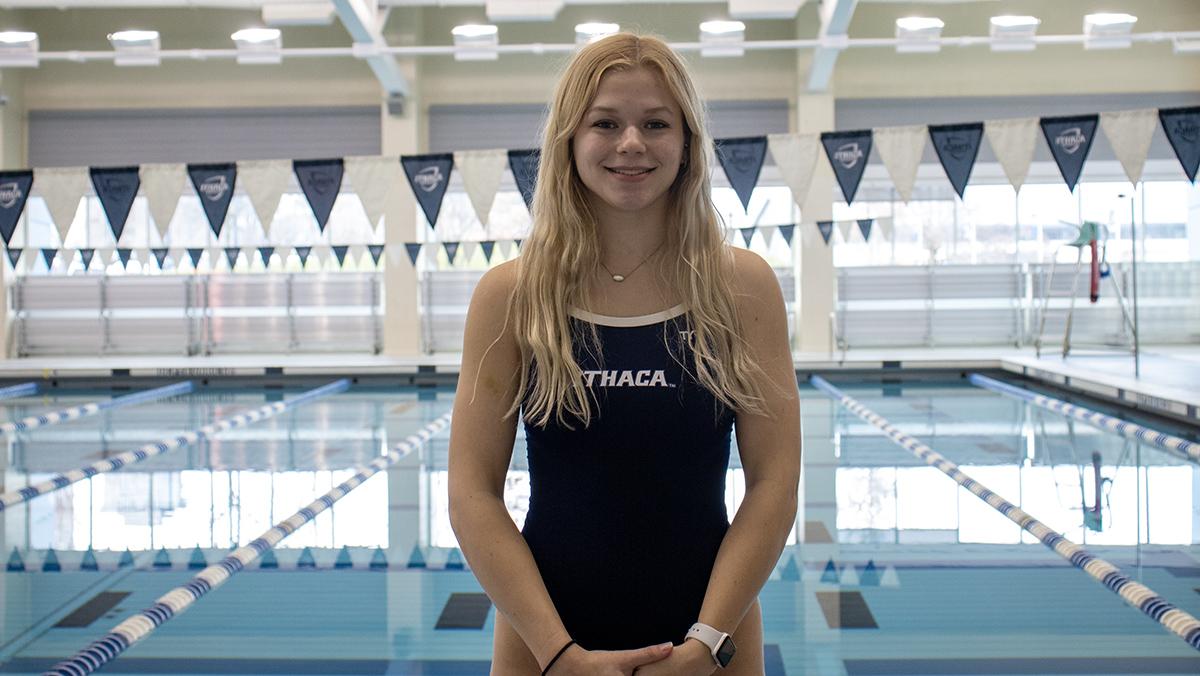 As Ithaca College winter teams start to wind down the first half of their seasons in anticipation of the winter break, the women’s swimming and diving team is looking to end their first half with an undefeated record.

The team currently sits 7–0 on the season with only the Bomber Invitational, which takes place from Dec. 2–4, left to go this semester. The team’s strong start has set the team on a path to win the program’s fourth straight Liberty League Championship.

Assistant sports editor Daniel King spoke with VanderSleen about her individual start to the season and the rest of the team.

Daniel King: The team season is off to an impressive start and is similar to the start in years past. How does the team continue this sustained success?

Emily VanderSleen: I think one of the really important things we do is we sit down all together before the meet season starts, like during practices and stuff. And we work out our goals as a team. One of the goals is an undefeated season, which I think pretty possible considering, like, the meets we’ve gone through so far and what we have left on our schedule; I think that’s just a really good way that we all figure out, like, what we want to do as a team just to start out the year.

DK: What can you say about the job the coaches have been doing in balancing the responsibility of coaching both the men’s and women’s team?

EV: We have two assistants this year who are helping out. Paula Miller, the old women’s coach and then Katie [Stettler], our other [assistant] coach. And so having some extra staff this year, on top of Kevin [Markwardt] and Mike [Blakely-Armitage], really helped them be able to balance and really work with everyone.

EV: It’s nice. I’m a big team player, and I like to be a contributor. So it’s nice to, like, sometimes get that recognition, but also at the same time, we’ve also had plenty of other people on the team who’ve been recognized this year, which I think is amazing.

DK: Of course, you’re a senior this year. Do you feel any changes in your performances from your first year until now?

EV: There’s a lot. Sophomore year we didn’t have a season because of COVID, so that’s changed how we progressed, especially for the senior class. But I feel like not just for myself, but our class as a whole has gone through a lot of leadership changes and growth. I think that helped us be leaders for the team. [My first year,] we had such a large team, I was just, like, one person. Now I feel like I have a much bigger leader[ship] role among the team.

DK: The team has the Bomber Invitational this week, which is the capstone to the first half of the season. How ready is the team for this meet?

EV: There’s, like, a lot of people who are really excited for this meet. This [is] kind of our prep for Liberty Leagues, as it’s a similarly styled meet. So the [first-year students] like a little bit of a taste of what that’s going to be like, and I think everyone’s just really pumped to swim fast this weekend and see what we can do.

DK: After the invitational, the team goes on a break. What do you do to stay in peak condition so you don’t lose any of that before the second half kicks off?

EV: Our team does a training trip. We’re going to head down to Florida on [Dec.] 15 and we’re there until [Dec.] 22, just get some extra training in before. And then we’re only home for a little bit; I usually will go back and swim with my high school coach and just get some workouts in while I’m home before we come back. Our coaches are really good; if you don’t have a coach to swim with, they send out practices. We have an amazing lift coach who also makes sure we have a lift card that we can do. They give us the resources.

DK: Looking ahead to the rest of the season, what are some goals the team has set for themselves?

EV: Our main goal is to win [the] Liberty Leagues; we have a title to defend. And so we’re going for that again. Then it’d be really cool if we could get some swimmers to Nationals this year. We have some really talented girls, and I think there is definitely a possibility there. So we’ll see how the release goes. But yeah, that would be pretty sick.