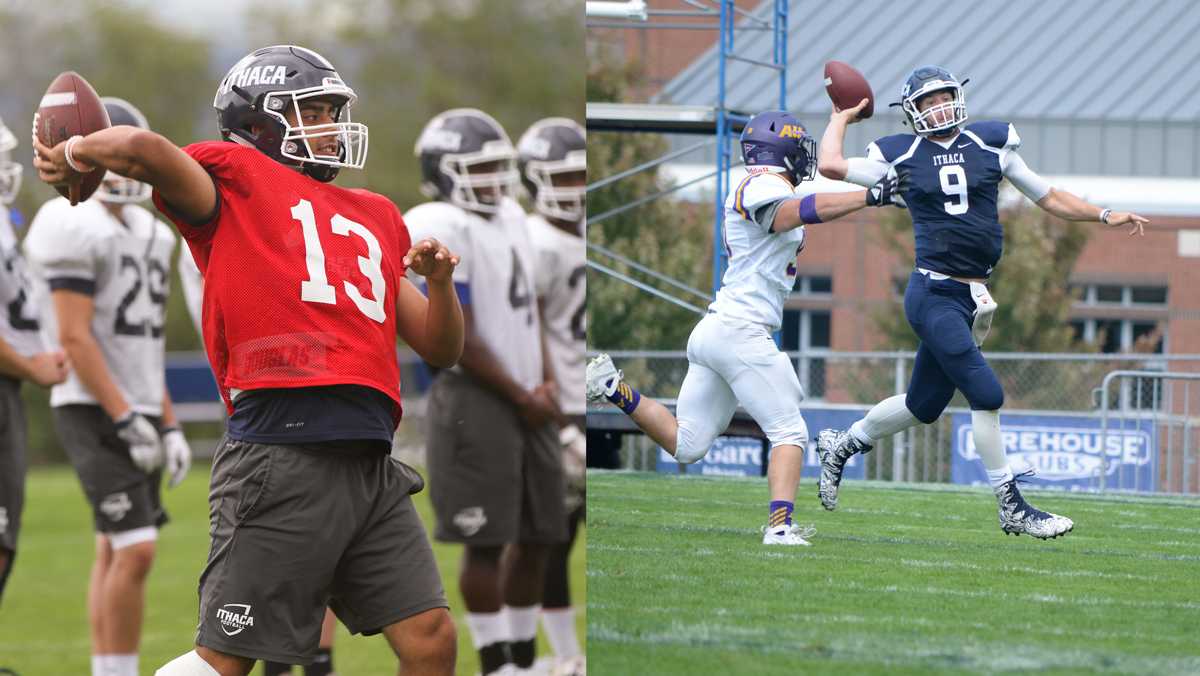 After completing five of eight pass attempts for a mere 11 yards, senior quarterback Adam Fron was removed from the game and the Bombers’ 31–0 loss to SUNY Brockport on Sept. 9 in favor of Ithaca College freshman Wahid Nabi.

The score was 17–0 when Fron was taken out of the game with 4:57 left in the second quarter. Nabi played the remainder of the game.

Although the Bombers were unable to manufacture any points, the offense was able to move the ball better with Nabi under center. He finished with 13 completions on 26 attempts for 153 yard and two interceptions.

Fron was coming off of a much better performance in the Bombers’ season-opening loss to Alfred University. In that game, he finished with 156 passing yards, one touchdown and one interception. He also ran for 95 yards, including a 52-yard touchdown run.

Fron said he understands that if he is not playing well enough, the coaches will find someone who can.

“As the quarterback, you’re the fall guy for everything that happens on the field,” Fron said. “That’s a responsibility that I take, and if we’re not scoring points, that’s 100 percent on me.”

Head coach Dan Swanstrom said he has not decided who will start the Bombers’ third game of the season against the St. Lawrence University Saints.

“It’s a balancing act between the two of them, and we need to figure out who is going to give us the best opportunity to win,” Swanstrom said. “It’s going to come down to who performs better in practice this week.”

Nabi practiced exclusively with the starters on Sept. 12 and 13, while Fron practiced with the backups.

Nabi said he was excited to make his first collegiate appearance and that the coaching staff helped prepare him for that moment.

“The coaches had me ready to go in at any time,” Nabi said. “They’ve always been telling me that I’m one play away from entering the game at all times, so I have to be ready, and I just went out there and had fun.”

Fron said that regardless of who is named the starter, he remains completely dedicated to his team.

“I am still 100 percent committed to this program, and people who know me know that’s not going to change,” Fron said. “I’m going to continue to bring 110 percent effort for the remainder of this season.”

Whomever the coaching staff chooses come Sept. 16 will be a crucial decision because of the importance of good quarterback plays. Also, through two games this season, the Saints have held opposing quarterbacks to a 34.2 completion percentage.

Swanstrom said both quarterbacks have strengths that make them viable starters but that he will not decide who is starting the upcoming game until the end of the week.

“Adam can make a big play with his feet at any time,” Swanstrom said. “Wahid is a very talented thrower, but he’s still a freshman. Adam refuses to turn the ball over, and Wahid will take some chances. One kid played well the first week, and the other kid played well week two.”

Nabi said he is confident in his abilities if he is given the start against St. Lawrence, but the mystery of who the coaches will choose keeps him humble.

“Now that I have my feet wet and there are plays I can look back on that I know I made gives me confidence going into the game,” Nabi said. “I still remember what it felt like to have never played and how hungry I was to get on the field, and that keeps me motivated.”

Football goes down 31–0 against SUNY Brockport