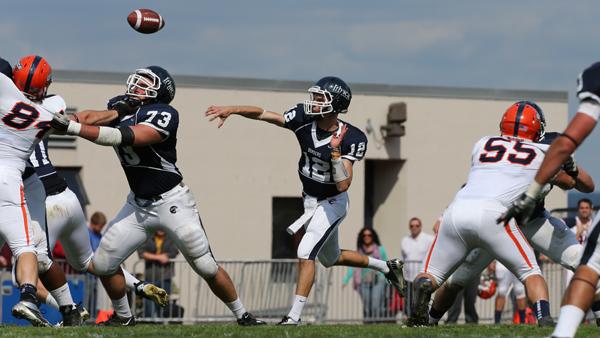 Last year, junior quarterback Phil Neumann was embroiled in a season-long competition to be the football team’s lead quarterback. A year and a full-time starting job later, Neumann’s assured performances have the Bombers at 4–0 for the first time since 2005.

In his first season as the full-time quarterback for the Bombers, Neumann already has 872 passing yards, nine touchdowns and one interception. At this time last season, he had five interceptions and one touchdown.

Neumann said a large part of his success this year can be attributed to the connection he has formed with senior wide receiver Joe Ingrao. Ingrao has caught 35 of Neumann’s 75 completed passes and leads the team in receptions, receiving yards and receiving touchdowns. Neumann said Ingrao’s all-around ability makes him a reliable target.

“He’s got a lot of talent, and he works real hard and does all those things receivers need to do,” Neumann said. “He runs good routes, goes up and gets the ball, and makes the catch whenever it’s a jump ball.”

Ingrao’s reliability was proven last weekend when he recorded a career-high 11 receptions in the Blue and Gold’s 40-21 win against Frostburg State. His 161 receiving yards, also a career high, were the most by a Bombers’ receiver in a single game since 2008. Ingrao said his familiarity with Neumann builds a mutual trust between receiver and quarterback.

“Phil and I have been playing together for a year and a half, and we’ve established a lot of continuity in the passing game,” Ingrao said.

Neumann’s is only getting better as the season progresses. The quarterback was 25 of 32 for 310 yards and threw two touchdowns in the Blue and Gold’s 40-22 victory against Utica College on Saturday at Butterfield Stadium. Neumann became the first Bombers quarterback to surpass 300 yards passing in a game since Rob Zappia ’12 on Oct. 23, 2010. He was awarded the Empire 8 Offensive Player of the Week award for his efforts.

Neumann and Ingrao’s impressive early season performances have attracted a lot of attention from opposing defenses. Despite the fact that defenses are looking for ways to shut them down, Ingrao said he is confident that the offense is capable of making any required adjustments to the passing game.

Head Coach Mike Welch said he knows the offense must find other ways to move the ball through the air.

“We know that we can’t rely on just that one quarterback throwing to one receiver consistently,” Welch said. “They’re going to be doing things to take him away, but we’ve got some very capable receivers in all our positions that we feel can get the job done if we need to.”

Neumann said he is confident in the other receivers, but admits that his reads have constantly led to Ingrao.

Ingrao said Neumann’s focus and work ethic have made the entire offense better as he evolves into a leader. He said he believes Neumann is becoming more of a playmaker in his junior season.

“Personally I don’t think he makes some of the plays he made this year, last year,” Ingrao said.

Neumann said he is pleased with how he was able to cut the turnovers out of his game and his ability to execute, despite the scrutiny that is beyond his control.

“It’s not my job to win over the fans,” Neumann said. “My job is to make good decisions, be accurate when I’m throwing the ball and execute the offense. If I’m able to do that, then hopefully we’re able to win as a team. That’s really all that matters.”