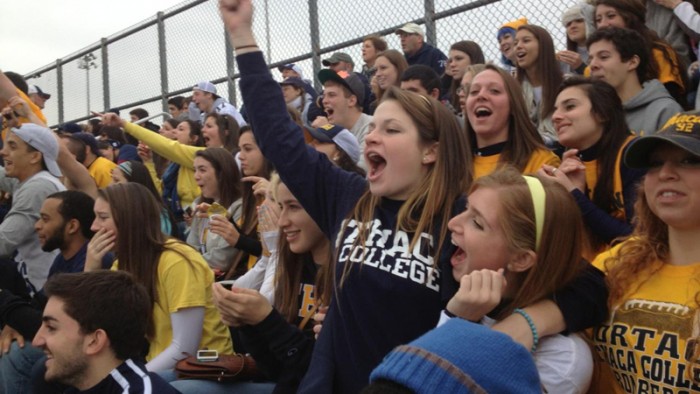 Ithaca College versus SUNY-Cortland — it’s a rivalry that has electrified upstate New York sports fans for more than half a century. But the Cortaca Jug football game is not as “big” as it’s been made out to be.

The college has been marketing the rivalry between the football teams from the college and Cortland as “the biggest little game in the nation” for at least 20 years, generally attributing the phrase to Sports Illustrated. However, a phrase that was once used in passing is now the unofficial motto of Cortaca.

It would be difficult to find a student who knows about the game that isn’t familiar with the phrase. The college has used it on its website, articles in Fuse Magazine, a magazine produced by the college for prospective students, and Intercom updates.

“It’s Cortaca Jug time again,” Meredith Farley wrote in Fuse Magazine in 2007. “The infamous football game, which has been dubbed the ‘Biggest Little Game in America’ by Sports Illustrated, has been held annually since 1959.”

“Cortaca — the annual battle that Sports Illustrated named ‘the biggest little game in the nation’ — will be hosted at SUNY-Cortland,” Kelly and Cortland’s vice president for student affairs, C. Gregory Sharer, said in the ad.

President Tom Rochon has also dropped the phrase “biggest little game in the nation” in his blog, “President’s Notebook,” on the college’s website following the game in 2007.

However, no records of the phrase “biggest little game in the nation” exist in the Sports Illustrated’s archives in relation to the Cortaca Jug, with the exception of one story from August 26, 1991, written by John Walters. Archival data from other publications such as Sporting News and ESPN the Magazine also make no mention of the phrase in relation to Cortaca besides Walters’ piece.

Sports Information Director Joe Gladziszewski said the phrase is attributed to an article separate from Walters’, but attempts to find citations earlier than 1991 have come up empty.

“To my knowledge, when that is cited, in reference, it was earlier than 1991,” Gladziszewski said. “But I could not find the citation [before 1991] that I was looking for.”

Rachel Reuben, vice president for marketing communication, also said she was not aware exactly where the phrase came from.

Walters’ piece was a Division III football preview, written before the season began, highlighting a number of important games and statistics and speaking of Division III athletics as an arena where students play the game simply for the love of their sport. A small portion of the piece, 64 of the 690 words, was devoted to the matchup between the Bombers and the Red Dragons set to conclude the 1991 season for each team. The year before, both squads had turned in successful seasons. The Bombers made the NCAA playoffs, and both teams looked strong heading into ’91.

“The biggest little game in the nation could turn out to be Ithaca versus SUNY-Cortland, by the shores of New York’s Cayuga Lake on Nov. 9,” Walters wrote on Aug. 26, 1991.

There are no follow-up articles after in regards to Cortaca. On Dec. 23, 1991, Sports Illustrated followed up on the Bombers’ season but discussed the team’s run through the NCAA playoffs without a mention of Cortland.

Currently, Walters writes for The Daily, an online news source, and for his own website, MediumHappy. Walters said he was unaware that the school was using the “biggest little game in the nation” phrase.

“I’d be remiss to tell you that I don’t know much that’s been going on between the two schools in the last 15 years, and I don’t mean that in a slam way in any sense of the word,” Walters said. “That was a long time ago.”

Walters also said while the Cortaca rivalry was and still remains a fierce competition, there are many similar rivalries across the nation, such as the annual game between Williams College and Amherst College in Massachusetts, that could be “the biggest little game in the nation.”

The landscape of college football changes annually. Division III football and the rivalry between Ithaca and Cortland have changed drastically since the piece was written, Walters said. Because of this discrepancy, he said the use of the phrase “biggest little game in the nation” is not fair.

“I understand that Sports Illustrated, having worked there for 15 years, carries a lot of weight,” Walters said. “But I think it’d be an anachronism to use what I said in 1991 in 2012.”

Dave Maley, associate director of media relations, said despite Walters’ comments, the use of the phrase is valid.

“I see no problem with the use of the phrase ‘biggest little game in the nation,’ because it’s factually accurate,” Maley said.

Adam Peruta, associate professor of strategic communications, said he understands why the school would use the phrase as it does because of the college’s difficulties branding itself.

“We’re this small liberal arts school that has trouble coming up with an identity for ourselves,” Peruta said. “We’re latching onto [the phrase] because it’s different, it’s unique, and it gives us some identity.”

According to Gladziszewski, a general regular season game does not sell out, but Cortaca has for about 25 years. Six of the Bombers’ last 10 matchups against Cortland have been decided by a touchdown or less, and the game also often carries the weight of playoff implications. 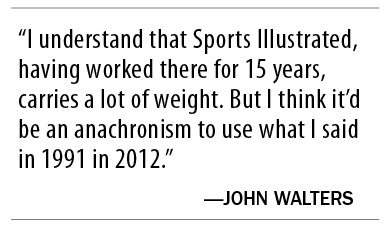 “Fans of both teams watching in the stands or on a live stream would say that it was one heck of a game.” Maley said. “To say that it’s ‘the biggest little game in the nation’ wouldn’t be wrong.”

Each year, pumped up fans pack the stands for Cortaca, and the fans that can’t be in Central New York watch the game together throughout the country. In New York City, hundreds of Cortland and Ithaca College alumni gather together to watch the game. Gladziszewski said Cortaca holds a special significance for those who have partaken.

“These are the games that you remember, for fans and players,” Gladziszewski said. “This is the game that your memories are made on.”

Senior Rob Flaherty, a president’s host and also president of the Student Government Association, said the game remains important to the community and is not tarnished by the misuse of the phrase. However, he said he will stop using the line on tours.

“I don’t think this takes away from the importance of Cortaca to Ithaca and Ithaca College alumni and its cultural significance for us or for Cortland,” Flaherty said. “Maybe to us it’s still the biggest little game, but we have to watch what we say.”