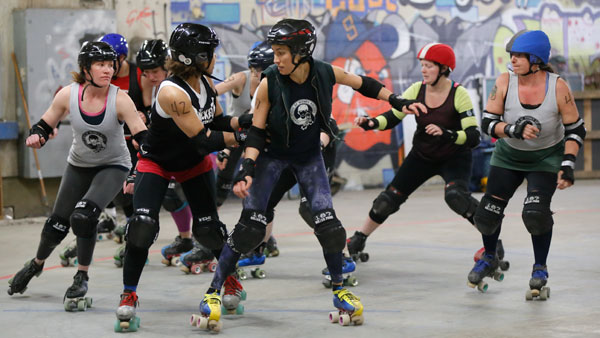 When Rachel Gunderson ’08, an Ithaca College professor in the Department of Health Promotion and Physical Education, leaves her office in the Hill Center at the end of the day, she takes on a whole different name by simply playing a game.

She takes the 15-minute drive from South Hill, following Route 34, to an old indoor skateboarding park in Lansing, N.Y. As she walks through the garage door on the right side of the tan-and-white building, she is greeted by ambient pop music and large graffiti portraits plastered on all four walls and, most importantly, the 35-meter bent oval concrete track where she plays the sport she has come to love: roller derby.

Before joining her teammates, Gunderson slides on a black Ithaca SufferJets shirt and gray workout pants followed by a pair of black gloves and elbow and knee pads, a pair of classic black roller skates with green wheels and, finally, a skateboarding helmet covered by a stretchy helmet cover with a red star, designating her role as a jammer, or point scorer. When she steps outside the dressing room, she’s not Rachel Gunderson: For the next two hours she goes by Gunder ‘N Lightning.

As she heads out on the rink, another team is out there as well: the Ithaca BlueStockings. The SufferJets, the BlueStockings and the Ithaca Junior Rollers, made up of rollers aged 8–17, constitute the Ithaca League of Women Rollers.

The SufferJets were founded in 2007 and have become the top-level team for ILWR. But in March 2010, the BlueStockings were founded to act as a minor-league team to the SufferJets. Three months later, the junior team was added.

In just four years, the SufferJets have progressed their way up in Women’s Flat Track Derby Association, and as of March 31 they are ranked No. 79 out of 192 teams in the league. There are three divisions in the organizations, with Division I being the highest and Division III the lowest. The ILWR is ranked No. 36 in Division II.

The SufferJets and ILWR were named to celebrate Ithaca’s historical advocacy for gender equality. SufferJets is a reference to the “suﬀragettes,” who promoted women’s voting rights in the early 20th century. The ILWR got its name from the League of Women Voters, an organization voted that has promoted female participation in the community and local government since 1920. Drag the roller skate around the rink to reveal the rules of the sport.

Each team fields five players at a time, consisting of four blockers and one jammer.

The four blockers from each team line up together and form a pack, while the two jammers lined up 30 feet behind.

The jammer is the point scorer and wears a star on her helmet.

The pivot is the pack leader and defensive play caller and wears a stripe on her helmet.

Each two minute play is called a jam.

There are two halves in a bout. Each half is 30 minutes long and has an unlimited number of jams.

Teams may freely substitute players between jams, except for those stuck in the penalty box.

Fouls include tripping, kicking, or blocking with feet or legs, blocking while 20 feet ahead or behind the pack, and skating out of bounds. As practice begins, both teams swarm the track to do some warm-up laps in order to get loose. Both teams keep to their own sides with a random assortment of fold-out chairs and benches marking the substitution area. Some have finished warmups early and are choosing to drink some water or talk strategy about blocking techniques and how to free up their jammers.

Veronica Frosen, lecturer of legal studies at the college and member of the BlueStockings, goes by the name of Ruthless Vader Ginsburg and said though the game seems repetitious from an outside view, the gameplay continues to change with new rules and new strategies, reflecting change in the world outside of the sport.

“The people in our league come from all different backgrounds, but [roller] derby is what unites us,” Frosen said. “It’s always different every time you go out there. There’s always things to improve, whether it’s communication, skills or cheering on your teammates.”

Alexis Icor ’10, known in the rink as Bento Boxer, is also a member of the BlueStockings. She wears a small rectangular rainbow flag sticker in the front of her yellow helmet, which she said signifies her belief in equal rights for her teammates in the sport and in life.

“It’s not like other sports because I like to think that derby is one of the most inclusive communities both in sports and in general life, in terms of accepting transexual skaters,” she said. “Derby celebrates a lot of traits in women that aren’t traditionally ladylike, like being strong and hitting people. It challenges what it means to be feminine but also breaks the stereotype that only LGBT women play this sport.”

As the suns goes down in the evening, the music inside also changes from a quick up-tempo rhythm down to a slower beat. However, the tempo of both teams does not slow down on the rink. Newly appointed team announcer Elizabeth Pax, or Pax Seat Driver, arrives as she pretends to call the play-by-play action of the scrimmage.

Pax, a burlesque MC originally from Texas, said the league has been an important staple in the community, especially in an area of the country that accepts and embraces the lesbian, gay, bisexual and transgender community. Though she is not paid for announcing, she said her role as an announcer can be just as important as a player.

“I think it’s really great to empower women and give them a chance to be athletic, fierce and break those traditional feminine gender roles,” Pax said. “As an announcer, I want to show that women can be loud and assertive, and the announcer is the authority of the game.”

Though both teams have practiced here this season, there is no guarantee they will be there for much longer. According to several players, the league’s lease on its current practice facility runs out at the end of June, and the team cannot return there to practice during the middle of the summer. The teams play their home games at Cass Park, but according to Gunderson, the team cannot practice there full time because it is too expensive to sustain. She said the team can practice for a few months at Cass Park until the ILWR finds a short-term home.

“If we get really desperate, we could rent out the gym in [Beverly J. Martin] Elementary School, but they can’t even put a whole track in it, and the floors are not very good,” Gunderson said. “We’ve been there years ago, and now we’re trying to expand and do really well. But we’re having this situation over and over again.”

In order to get its funding, the adult members pay about $50 per month with an extra $3 for equipment rental each session. The City Federation of Women’s Organizations from the Women Building Community has offered grants to help sustain the program for in the past two years. The CFWO offered two grants for women of lower income to help cover their costs and help them pay for dues and equipment. Gunderson also said the program can remain a nonprofit because of the junior league team.

“We’re kind of in panic mode,” Gunderson said. “If we don’t have a place, they can’t skate. We use the money from the juniors and our dues to sustain ourselves for rent money.”

After the final repetition of the night, both teams tailback and skate through the line shaking hands and bumping knuckles with the officials in the middle. Eventually, everybody makes their way to the backroom to change out, ultimately leaving their pads and their derby names behind for the time being.

Gunderson, who stays behind to lock up the building, shuts the lights off in the rink and sorts through the equipment to make sure everything is organized for the team’s next practice. She then drives away from the darkness surrounding the rink, heading back toward the city lights of Ithaca. On the way back, she will pass Cass Park sitting on the shore of Cayuga Lake, the place where the team will open its home schedule with a doubleheader May 10 against the Queen City Roller Girls and the Connecticut Yankee Brutals.

Though Gunderson said she believes every team in the ILWR will be able to finish the season without their current practice facility, she said she is concerned that the progress the program has made in six years is under threat if the team cannot find a permanent facility soon.

“We’re in a bind because when you don’t stay in a sport for a certain amount of time, you lose a lot of skill,” she said. “Having the support from the community makes it so much fun for us to practice during the week and take pride in the sport.”

This article has been revised to reflect the following corrections. Correction, May. 22, 2014:

Elisabeth Pax is a Burlesque Emcee not a Disk Jockey as mentioned in the article.