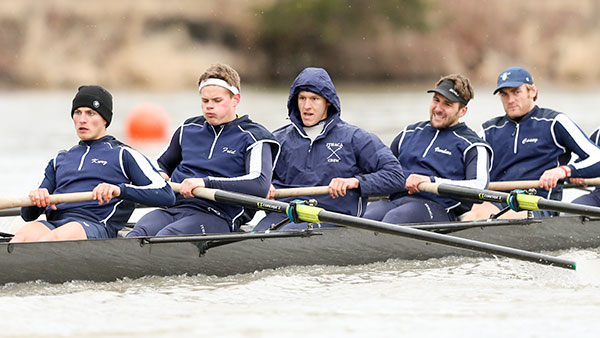 When former varsity rower Erik Frid ’14 graduated in May, he had no intention of ending his rowing career. In fact, he went from racing the best at the collegiate level to rowing against some of the best young athletes in the world.

Frid competed in the double sculls from May to August and qualified for the Under-23 Double Sculls World Championships in Varese, Italy, with his partner Walter Banfield, a sophomore at Dartmouth College. Though Banfield is a lightweight rower and Frid outweighs him by about 60 pounds, Frid said the duo was able to share experiences and make the partnership successful in competition.

“We had to adjust things like power applications in our strokes, but we were good at coming up with smart race plans and executing them,” he said.

Their bonding began in an environment where there were not many distractions to rowing — the Craftsbury Sculling Center in Craftsbury, Vermont. This town of about 1,000 people in the Green Mountains is home to North America’s first rowing camp and is a worldwide training center for scullers of all ages.

Frid and Banfield made an agreement with the Craftsbury training staff where the two would work 14 hours each day for the camp by assisting summer rowing camps and their staff. In return, the two were allowed to train and live at the center during the summer. Frid said it took him a while to adjust to the isolation, but he said it helped him stay focused on being successful.

“You’re kind of in the middle of nowhere, and there’s no cellphone service, so in your downtime you find other things to do,” he said. “But you get to meet some of the senior rowers who definitely model some of the things you need to do.”

Banfield, who finished 10th in the single sculls at the 2013 World Rowing Junior Championships in Lithuania, said he was more relaxed this summer because there was not as much buildup to this competition.

“Juniors was more intense because that’s what you focus on for two or three years, and it’s more relaxed when you’re together in [sculling],” Banfield said. “The pressure is really still the same at all levels, but I think Erik and I were able to focus and compete well.”

After weeks of training, the two put their partnership to the test when they competed at the Under-23 US World Championship Trials at Mercer Lake in West Windsor, New Jersey. Despite getting a slow start, Frid said he and Banfield were able to attack the middle of the race and eventually were victorious in the double sculls competition with a time of 6:40.37.

After finishing 3 seconds ahead of the next boat, Banfield said, the duo was stunned and proud of what they had accomplished with such little training time.

“It was one of those holy s— type of moments,” Banfield said. “It was amazing what we were able to accomplish in just a few months.”

After the trials, Frid and Banfield returned to Vermont in preparation for the World Championships in Italy. When the duo arrived in Italy in late July, Frid said there were a few adjustments to make before they were ready to compete.

“We had to rent a new boat over there, and it had smaller oars,” he said. “ Practicing twice a day with a different boat while fighting off jet lag took about three days.”

Despite improving their time to 6:37.99, Frid and Banfield were edged out by Spain and Russia in their heat and finished 14th overall out of the 20 nations represented in the competition. However, the duo ended its international experience on a high note by taking first place with a summer-best time of 6:36.45.

Frid said his team’s boat fell behind early, and despite racing aggressively in the middle, could not climb up in the overall standings.

“Most of the Europeans get out to fast starts and then try to hold on for dear life,” he said. “That’s something I’m not really used to, and sometimes it’s enough to seal a race early.”

Throughout the summer, Frid said, his former head coach Dan Robinson would exchange emails to discuss the summer and preparation for the trials and world championships. Robinson said he didn’t offer any advice to Frid, but was confident he would place well.

“Erik was one of our leaders the past few years, so I knew that in his final chance to compete as a U-23 he had the chance to do something special,” Robinson said. “It’s always great to see one of your former athletes continue to be successful beyond just their four years [at the college].”

Though he has aged out of the Under-23 division, Frid said he will continue to row for as long as possible and that this summer was a springboard to keep his future career.

“This summer definitely fueled the fire,” Frid said. “I can’t imagine giving it up anytime soon.”