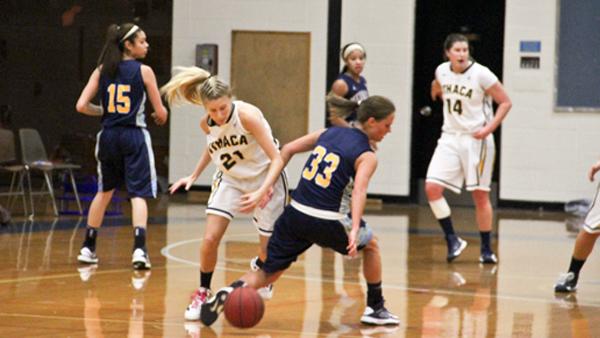 With an overall record of 14–2 and a 2nd-place ranking in the Empire 8, the women’s basketball team is in the midst of one of its best seasons in program history as the Bombers strive to accomplish their goal of becoming national champions.

Experience and leadership have helped ignite a spark in the South Hill squad — leading to a winning streak lasting more than a month and gaining attention on the national stage. Success has not brought on complacency as the team looks forward to achieving its goal one game at a time.

The veteran squad features 11 players who helped the team achieve a record 24 wins during the 2011-12 campaign. Head Coach Dan Raymond said experience has been an advantage for the team this season.

“Experience makes a huge difference with the number of players that have already contributed to success in the past two years,” Raymond said. “They, for the most part, have a really good idea of what it takes to be successful.”

Capitalizing on experience, the players have continued to develop the team’s camaraderie through team activities off the hardwood to help reach their full potential. Senior guard Catherine Lewis said over winter break, the squad spent more time together than in previous years.

“In other years, people would kind of lock themselves in their rooms, so this year we did a lot of things together,” Lewis said. “We went to a water park, we went to Syracuse and worked at the Ronald McDonald house. We did a lot of stuff, and that helps us on and off the court.”

Enhanced team chemistry has paid off. The South Hill squad recently had an eight-game winning streak that included a victory over rival University of Rochester. It was the first win over the Yellow Jackets since the 1995-96 season, making the victory, and the streak, that much sweeter.

Raymond said he believes everything the Bombers have accomplished this season is the result of tremendous teamwork.

“It’s hard to not keep reiterating team effort,” Raymond said. “This groups gets along extremely well, and they work for each other.”

The results the Bombers put up during the winning streak, and continue to achieve on the floor, are gaining national attention. The squad has received votes in the D3Hoops.com Top 25 poll for the past three weeks and is also nationally ranked in several team statistical categories. The Bombers are 5th in the country in assist turnover ratio and 6th in scoring defense (points allowed per game). In the Empire 8, the Blue and Gold lead in several key stat groups, including points per game and field goal percentage.

While it would be easy to get complacent and revel in recent success, the team is remaining vigilant. The Blue and Gold still have a tough conference schedule ahead of them — including a matchup against Hartwick College, which is currently on top of the E8 standings.

Lewis said the Bombers will look to make a statement this weekend as they take on conference opponents Stevens Institute of Technology on Friday and Hartwick on Saturday in Ben Light Gymnasium.

“We’re excited to erase what happened [in the loss against] St. John Fisher and show that we are on top of the E8,” Lewis said. “We’re looking to really bring it together and have that full 40-minute game that we haven’t had yet. We’re going to push each other at practice and hope for the best.”

Senior guard Kathryn Campbell said though the Blue and Gold are proud of their accomplishments, the team still has to make improvements to clinch the regular season title.

“We definitely still need to work on some things like turnovers, and we had some trouble rebounding against St. John Fisher,” Campbell said.  “We’re just going to have to work hard on those things in practice and get better and hopefully come out with wins for the rest of the season.”