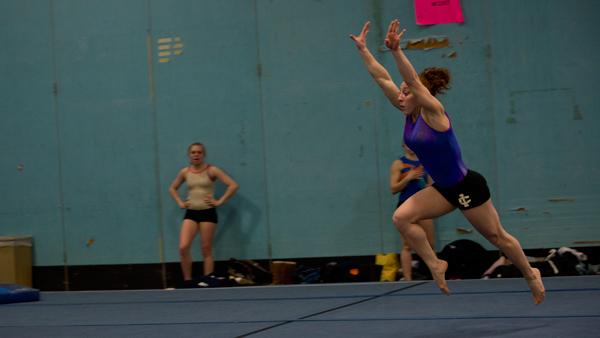 After an hour of rehab, the Bomber gymnasts walk into the gym and head over to the practice agenda on the wall of the Hill Center. They run their finger down the list, where they will find their rigorous three-hour schedule for the day.

Throughout the season, the South Hill squad’s practice intensity has been raised, contributing to their weekly improvements. In its first meet of the season, against Brockport, the team scored 177.825 overall points. Since then, the Ithaca College gymnastics team has not fallen below 180 points at any meet.

Phase one of practice includes the warm-ups prior to venturing off to the designated apparatuses. Sophomore Valerie Cohen said even the team’s warm-up schedule is a demanding 30 minutes. The warm-up is when the team’s energy level picks up, and it becomes one of the loudest practices on campus.

“We start with a run, then we all do our own stretching routine for our own personal warm-up and then begin our strength and basic tumbling skills,” she said. “This is where we begin to pick up our energy and keep it at that level throughout practice.”

The team then splits up, heading to its top event to enter into phase two: the competition practice. Each of the four areas requires a set of skills that they must prepare both mentally and physically.

The vault requires explosive but controlled energy, as the gymnasts sprint down the runway then throw themselves over the vault and land a perfect stunt. Graduate student and co-captain Christine Niles said the gymnasts first prepare themselves to flip on the vault by raising their adrenaline with practice training.

“I like to go on the big mat first to do the preliminary skills for my vault to make sure I have my technique down,” Niles said. “Then we will do the vault at least six times and try to hit a number, which for me is three, as well as I can.”

When advancing to the beam, the squad’s adrenaline rush must subside, and the team must use perfect precision to master its skill set. With only four inches of space to move, graduate student and co-captain Tiffany Grube said focus is the most important part of this event.

“You have to have a lot of control of your adrenaline compared to other events,” Grube said. “It is a much different focus, because there is not a lot of room for error since any small mistake can throw you off.”

As they move over to the bars, the South Hill squad must rehearse rhythm to keep the correct motions and natural rotations throughout its routine. While it still requires a great deal of force, Niles said it is the mental preparation and cue words that make a bar routine flawless.

“Mentally I go through what I am going to do before I even step up, and if I am trying to do something new or perfect something, I do it multiple times,” she said. “As I jump up, I will do my routine over again, and as I go through, I use my cue words that help me remember my technique and timing.”

Floor exercise returns the Bombers to the up-tempo adrenaline seen in the vault. In this position, they work to perfect tumbling passes and the most difficult of skills while adding their own flare with jumps. Grube said this event shows off more than just tumbling, so an athlete must combine pieces of each event as well as adding her own style to create an original sequence.

“You get to put your own personality into it to make it fun, but you can be really powerful and aggressive too,” she said. “You have to be graceful as well as show off other skills, such as jumps and leaps.”

As practice comes to a close, the team enters the third phase, known as the cool down. This varies daily between strength conditioning, fine-tuning the smaller skills and extra rehab to help with injury.

Cohen said a three hour practice to many would seem extremely long, but the amount of preparation and practice that goes into each skill and event leaves the gymnasts without any time to spare.

“It is very structured, but I never feel like I have enough time to get everything done, because there is so much to each event,” she said. “The amount of time it takes us just to warm up and stretch alone is incredible, so we go non-stop for three hours.”