Road to the podium: Wrestling team hopes to peak in postseason 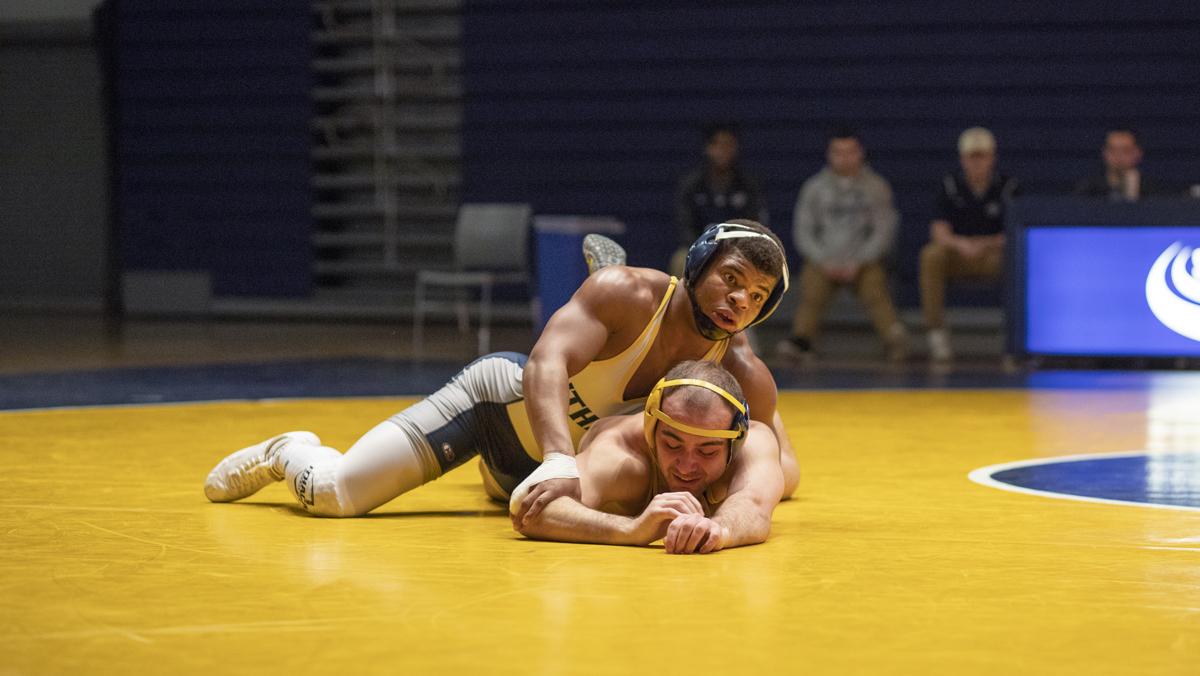 CONNOR LANGE/THE ITHACAN
Senior Jawan Jones pins Wilkes University senior John Ritter in their matchup Feb. 8. The Bombers are currently 11–4 on the season and are preparing for the NCAA Mideast Regional Championships on Feb. 23.
By Will Gaglioti — Staff Writer
Published: February 21, 2019

After taking several losses at the beginning of the 2018–19 season, the Ithaca College men’s wrestling team has bounced back and seems poised to be at the top this year. The team is currently on a seven-game win streak, and the wrestlers are hopeful that their success will continue as they begin their championship season.

The team is currently the sixth-ranked Division III team in the country, according to the InterMat Wrestling rankings. The Bombers hold an 11–4 record on the season with only two meets left on the schedule. Out of the South Hill squad’s four losses on the season, the first two losses came from Division I schools at Northeast Duals, which were against University of Virginia and Appalachian State University. The only other two losses occurred at National Duals against the fourth-ranked Wabash College and fifth-ranked Baldwin Wallace University.

Head coach Marty Nichols said matches where the wrestlers compete against top-tier teams, like Division I schools and top-ranked teams in the country, prove to be valuable in the long run, despite the losses that they have notched into the team’s record.

“Getting that kind of competition and understanding of where you need to be for the end of the season is what those prepare us for,” Nichols said. “We are competing against guys that are training all summer and coming away within one match, in terms of points of winning, against the teams that we are going to be seeing again at the end of the year.”

Junior Ben Brisman, who wrestles in the 141-pound bracket, said these matches against stronger opponents help to prepare him well for his postseason contests and teach the team where it needs to improve.

“All these high-level competition matches have just given us more experiences to learn from,” Brisman said. “It prepares us for high-level competition in the postseason and helps us learn from the mistakes we make when facing the best guys in the country. Most of the season can be thought of as a learning experience in order to be the best wrestler you can during the postseason.”

The NCAA Mideast Regional Championships and NCAA Division III Championships are the last two meets of the year and, according to Nichols, they are by far the most important. In 2018, the South Hill squad won the regional championship, qualified seven wrestlers for the national championship and placed third at the meet. Brisman, then a sophomore, won a national title in the 141-pound weight class.

This trend of championship success is not a new one. Since team scoring was added to the regional meet in 2014, the Bombers have never finished outside of the top two spots. They have appeared in every NCAA Championship meet since 1982 and have placed in the top 10 18 times. Nine of those appearances have occurred during Nichols’ tenure as head coach. The Bombers’ third-place finish last year at nationals was their highest rank since their first-place finish in 1994.

The regional and national championships give the Blue and Gold the opportunity to prove themselves against the best teams in the country. The team has to prepare for these matches intensively so that each athlete is able to wrestle their best at this critical point in the season.

Senior 125-pound captain Ferdinand Mase said the team works to improve throughout the season, and particularly down this final stretch, by making small changes that lead to a greater goal.

“We have the 1 percent rule, where we push ourselves to get at least 1 percent better at something every day,” Mase said. “By focusing in on gradual steps, you can’t help but fill in the gaps.”

Mase also said that focusing on strengthening the team dynamic is critical to success in the team’s championship meets. The captains and other members of the team try to emphasize the wrestling team’s legacy of success so that they can continue to improve.

“We have a team of leaders,” Mase said. “It’s not just a few of us driving toward our goals, it’s every single person pushing each other and working hard every day. Everyone knows what it’s going to take from this point forward and everyone has been playing their part well and taking pride in everything they do.”

Brisman said the physical intensity at practice and the mental drive that he and the rest of the team have while training increases as they enter championship season.

“The intensity definitely picks up a bit,” Brisman said. “The team starts becoming more motivated since everyone wants to do well this postseason. The mentality stays somewhat the same. Everyone has goals to be national champs or do the best that they can by giving it their all.”

With just one month left in the season, Nichols said he has been pleased with the team’s performance so far this year but hopes to improve its overall game plan heading into matches before the regional meet Feb. 23 in Brockport, New York.

“They have been pretty consistent coming in from the workouts and training and that type of thing, so I think we are good in that realm,” Nichols said. “I think we just up our strategy a little bit, improve our conditioning a little bit and hone in on the guys that are going to regionals and tune those guys up, while the other guys have to up their game to help those guys as well to get ready for regionals.”