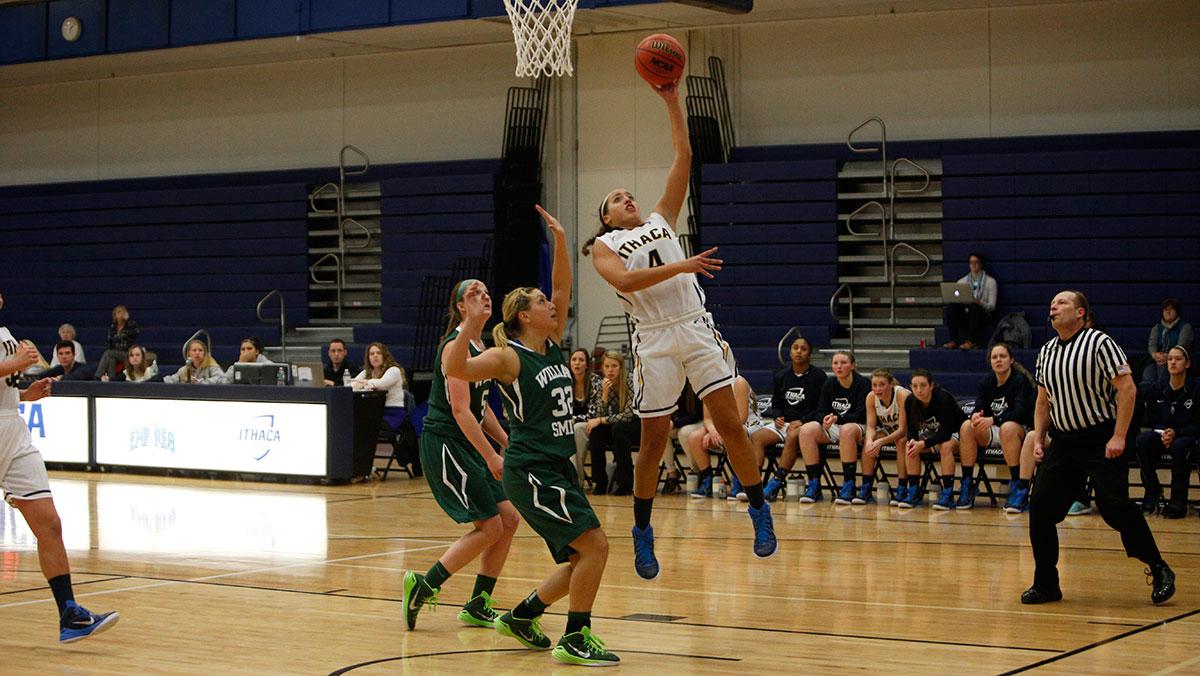 The wrestling team stepped onto the mats in its first dual-match of the season, defeating Rhode Island College 23–9 on Nov. 15 at the Northeast Duals in Oneonta, New York.

The Bombers notched back-to-back wins to begin the tournament, as sophomore Jimmy Kaishian and junior Henry Beaman defeated their opponents 12–2 and 5–4, respectively.

Aside from Kaishian and Beaman, juniors Eamonn Gaffney and Greg DuVall, freshmen Nick Velez and Jaison White, and senior Kevin Collins also posted wins over the Anchormen, which allowed the Blue and Gold to comfortably win the meet.

The South Hill squad, which entered the Northeast Duals ranked eighth in the country, will now wait to see if it moved up in the National Wrestling Coaches Association Division III Poll following the win.

The Blue and Gold next hit the mats when they participate in the New York State Championships on Nov. 23 at Cornell University.

The No. 23–ranked women’s soccer team saw its season come to an end in the second round of the NCAA Tournament.

In the Blue and Gold’s first-round matchup with Springfield College on Nov. 15 in Williamstown, Massachusetts, junior forward Sarah Woychick continued her hot streak with her third goal in as many games. Junior forward Kelsey King added two of her own to help give the South Hill squad a 3–1 win over the Pride.

A day later, No. 5–ranked Williams College ended the Bombers’ run to the title with a 4–1 victory on their home field. The Ephs jumped to a two-goal lead within the games’ first 10 minutes and never looked back.

Despite the loss, junior goalkeeper Beth Coppolecchia said she is already excited by the future of the young squad.

“I’m looking forward to building off of what we created this season,” she said. “All the experience the underclassmen got is going to be so helpful next year.”

The Bombers will see Coppolecchia, King and Woychick step into more prominent leadership roles next season as the only three seniors on the squad.

Later that afternoon, the Bombers took on Ramapo College in the championship game, eventually defeating the Roadrunners in a thrilling five-set match.

Senior captain Rylie Bean continued her dominance, securing a match-best 23 kills and 17 digs against the Roadrunners. She earned Most Outstanding Player honors for the tournament in her last career match for the Bombers.

Sophomore middle Siobhan Sorensen said winning the tournament was the highlight of the season and will look to transfer the momentum into next year.

“There is no better feeling than finishing the season with a win,” Sorensen said.

The women’s basketball team began its season with a 74–63 win over William Smith College on Nov. 15 in Ben Light Gymnasium. This marks the fifth-straight year the Bombers have opened the season with a victory.

The Bombers forced 28 turnovers on the day, 21 of which were steals. Despite the Bombers’ strong play, the team was outrebounded 52–29 by the Herons.

Head coach Dan Raymond said he was excited about the first win, and the players were ready to get back to practice and improve.

“It was really nice to see that we were able to play as well as we did,” Raymond said. “I feel like our depth is going to be a huge strength for us this season.”

The South Hill squad will return to action at the Messiah Tip-Off Classic on Nov. 21 to take on John Jay College of Criminal Justice in Grantham, Pennsylvania.

Freshman guard Marc Chasin led the Blue and Gold against the Thoroughbreds with 29 points, while sophomore guard Joe Masino led the team with five assists and seven rebounds.

Chasin said despite the opening-night loss, the Bombers are still feeling good about the season.

“We were very positive on the bus ride home,” he said. “Being such a young squad, we know we still have some work to do, but we’re very happy with where we are right now.”

In its next game, the South Hill squad will face Trinity College on Nov. 21 at Ben Light Gymnasium.

Both the men’s and women’s cross-country teams competed in the NCAA Division III Atlantic Regional on Nov. 15 at Genesee Valley Park in Rochester, New York.

The women’s cross-country team placed fifth out of 40 teams. Graduate student Allison Bartkowiak earned an automatic spot at Nationals by finishing 26th overall with a time of 22:38.

While the men’s squad did not qualify, the women’s team received an at-large berth from the NCAA and will be competing for a national title on Nov. 22 in Mason, Ohio.

“Right now we are all extremely excited and anxious for next weekend,” Cass said. “We don’t plan on doing much different this week though because our training has been working well so far.”