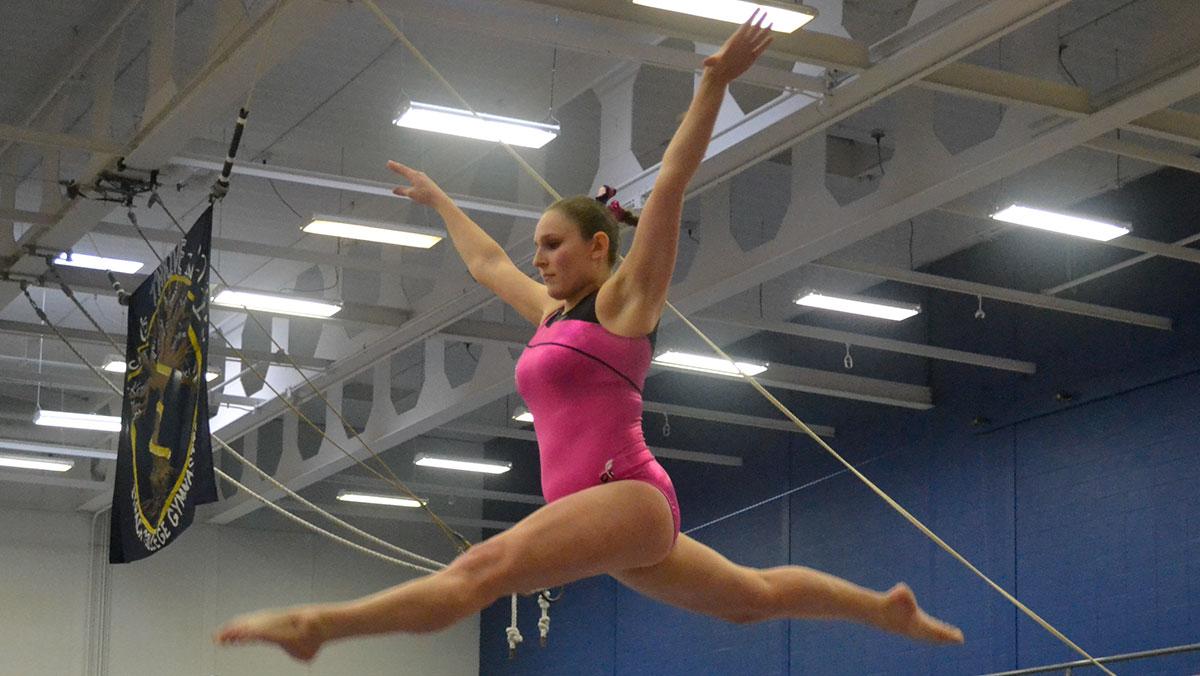 Jennifer Williams/The Ithacan
Sophomore Lynley Choate leaps in the air during the Harriet Marranca Memorial Invitational on Feb. 15 at the Hill Center. It was the team’s first win of the season.
By Ithacan Sports Staff — The Ithacan
Published: February 18, 2015

Freshman Nick Velez and junior Dan Pak led the way for the Blue and Gold, scoring 12 and 11 points, respectively. Four other South Hill squad wrestlers also recorded wins as the team went on to win six of 10 total matches.

Sophomore Nick Wahba, senior Kevin Collins, sophomore Carlos Toribio and sophomore Greg DuVall each defeated their Wilkes University opponents as the team improves to 10–2 on the season heading into the home stretch.

Toribio was named Empire Collegiate Wrestling Conference Wrestler of the Week as a result of his 184-pound victory.

The Bombers will next wrestle against SUNY Cortland on Feb. 18 in Cortland, New York, in their final match before the NCAA Regionals, which begin Feb. 28. The squad will look to qualify as a team and as individuals.

The women’s basketball team had two important matchups Feb. 13 and Feb. 14 that played a significant role in determining the standings of the Empire 8 conference and who would take over the No. 1 spot.

The Bombers started their final two-game homestretch of the regular season Feb. 13 against Hartwick College. The Hawks kept the game close, but ultimately the Bombers won the game 60–50.

It was Senior Day for the Bombers as they hosted Stevens Institute of Technology on Feb. 14. The two teams came into the game tied for first place in the Empire 8 standings. The team would take over sole possession of the top spot in the conference by defeating Stevens 61–42.

Klie said Senior Day was sentimental for the four seniors on the team, but that the season isn’t over yet.

“The team really becomes a family, and … I will miss seeing my teammates everyday and working towards a common goal,” she said.

The Blue and Gold returned to action Feb. 17 as they traveled to Nazareth College to take on the Golden Flyers. The Bombers defeated Nazareth by a score of 70–60.

The Bombers will finish the regular season Feb. 20 at Elmira College.

The Bombers went into a three-game stretch from Feb. 13–17 that featured the final two regular season home games for senior co-captains Keefe Gitto and Max Masucci.

The Feb. 13 game saw the Blue and Gold fall to a Hartwick College Hawks squad that was riding a five-game win streak. Hartwick jumped to quick lead in the first half, but the Bombers were able to answer and tied it up, forcing the game into overtime. In the extra period, the Hawks came out on top 93–90.

Feb. 14 saw the South Hill squad honor Gitto, Masucci and senior manager Joey Gallagher before tipoff with Stevens Institute of Technology. After regulation, the Bombers once again found themselves in overtime, but this time just one extra frame would not be enough, and the teams headed to a second overtime tied at 107. In the end, the Ducks pulled out a 125–120, double-overtime win.

To close out the three-game span, the team travelled to Nazareth College to take on the Golden Flyers. The Bombers got key contributions from Gitto and junior guard Sam Bevan, who scored 20 and 16 points, respectively, but ended up losing 95–84. Nazareth’s offensive attack was highlighted by junior forward Mitch Ford’s 49-point effort.

The Bombers final regular season game will be Feb. 20 when they travel to Elmira College.

The men’s and women’s swimming and diving teams held their final home meet Feb.14. The meet was not scored.

For the men’s, the 200-yard medley relay finished first as the only meet entry. The team of senior Jonathan Wheeler, junior Vincent Dodero, sophomore Eddie Mostert and freshman Alex Rosenhein finished with a time of 1:46.04.

On the women’s side, the 200-yard freestyle relay finished first as freshman Heidi Mickunas, sophomore Jennifer Francisco, junior Megan Zart and sophomore Lianna Reis earned the top spot with a time of 1:46.46.

Three individuals captured the top spot in their respective events including Brenna Dowd in the 500-yard freestyle Michelle Heidgerken in the 100-yard breaststroke and Geneva Bielenberg in the 100-yard backstroke.

Freshman Anna Belson placed first on each board event over the weekend finishing with a score of 459.96 on the 3-meter dive and 477.07 on the 1-meter dive.

Senior Brendan Marks said even though the meet wasn’t scored, it was important for the men’s team especially, which has fewer members this year.

“The meet over the weekend was a last-chance meet for our guys,” Marks said. “We have a smaller squad this year, so we’re bringing almost everybody to Empire 8’s. So the people who swam were mostly just getting a chance to swim an event they don’t normally do … All that’s left now is to go out to Webster [New York] and do what we do best.”

The Bombers had a team score of 181.050, finishing third out of the four teams present. The squad scored its highest team score on vault with a 45.825. Freshman Rachel Lee contributed most to that team score with an individual vault score of 9.350, the team’s third- highest score of the meet.

Freshman Hannah Donnelly held the Bombers’ highest individual score with a 9.500 on balance beam, tying for first-place in the event with Lily Jagodzinksi of Brockport. Donnelly said with the score, she achieved a goal she had been working toward this season.

“The team and I have been working very hard to get 9.5’s and I am so happy that I was able to contribute,” Donnelly said.

Sophomore Ingrid Calfee scored a 9.250 on floor, finishing ninth for the Blue and Gold while Harrington scored a 36.225 as the only member of the team to compete in all-around, placing third out of the five who competed in the event.

The Bombers’ next meet will be Feb. 21 in Providence, Rhode Island, against Rhode Island College.

The men’s and women’s track and field teams competed in the Empire 8 Indoor Championships on Feb. 14 at Houghton College.

Junior Alex Rechen broke the facility record in the pole vault with a height of 3.50 meters, allowing her to qualify for ECAC’s as well as garnering first-team all-conference honors.

Senior Christine Benway was named to the All-Conference first-team in the 60-meter hurdles with an ECAC qualifying and facility record time of 9.32 seconds.

The men finished second overall in the Empire 8 Championship, breaking the team’s run of seven straight conference titles. The Bombers finished with four individual all-conference performances and one relay.

Senior Rashaad Barrett and junior Stephen Gomez both finished first overall in the 60-meter dash and 5,000-meter run, respectively. Barrett finished with a time of 6.97 seconds to set a new Empire 8 meet record. Gomez finished the 5-kilometer run with a time of 15:31.92, nearly six seconds faster than the runner-up.

Juniors Dane Eckweiler, Brandon Leary and Zane Shephard, and freshman Alex Grapp combined to finish second in the 4×200-meter relay with a time of 1:37.58.

Both squads will next compete when they host the Bomber Quad on Feb. 20 at the Athletics and Events Center.