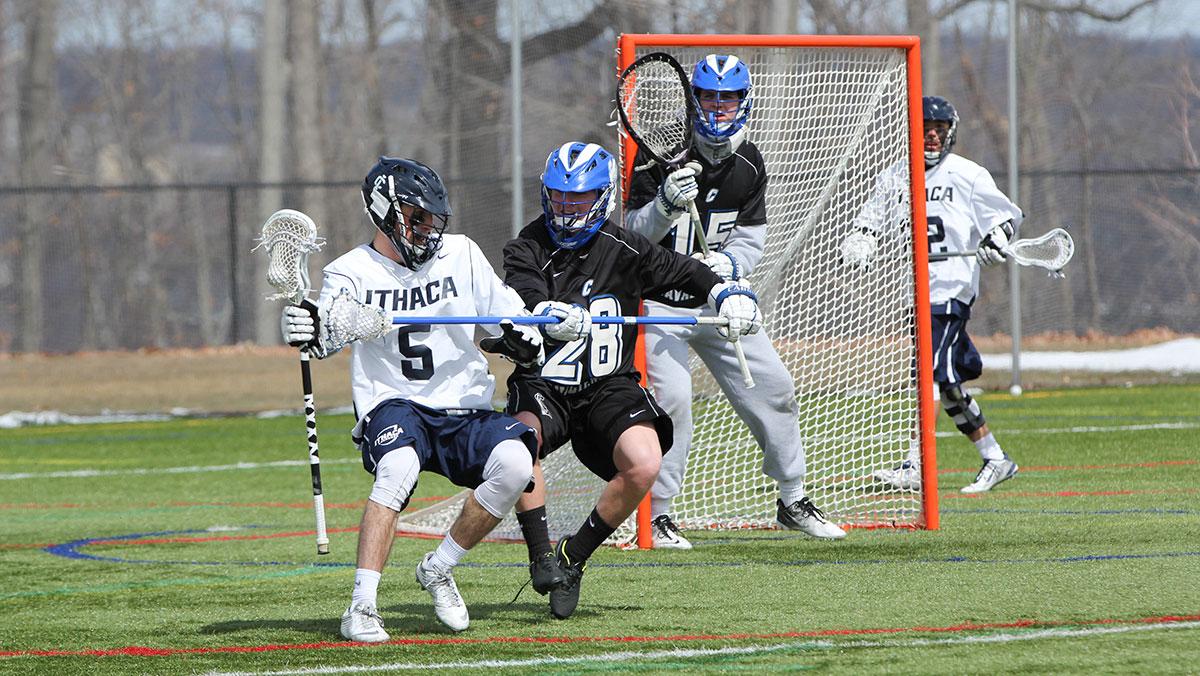 After a plethora of cancellations and postponements, the baseball team finally played a game in Ithaca in 2015.

On March 31, the South Hill squad faced off against the Elmira College Soaring Eagles at Hoy Field at Cornell University.

They would go on to win the game by a score of 13–0 over the Soaring Eagles, improving their record to 3–7 on the season.

It was an all-around team performance for the Bombers as they not only secured season-high’s in hits and runs on the offensive side, but also notched their second shutout of the season on the defensive side.

Sophomore second baseman Josh Savacool went 3-for-4 at the plate, driving in three runs, scoring twice, with a double and triple. Juniors John Stanley and Zack Pidgeon both went 2-for-4 in the Bombers’ 15 total hits.

Senior Andrew Sanders earned his first victory of the season for the Blue and Gold, throwing three no-hit innings with one strikeout. Juniors Benji Parkes and Brandon Diorio tossed five innings with six strikeouts  combined coming in relief of Sanders. Senior Jimmy Wagner came in the ninth inning to close out the game and struck out one batter in a perfect inning.

The South Hill squad will play again on April 2 with a doubleheader against SUNY Oneonta. This opens a stretch of five games in three days for the Bombers.

Freshman Rachel Lee was the only gymnast from her team to qualify for the National Collegiate Gymnastics Association Championship in La Crosse, Wisconsin, on March 28.

Lee placed fifth on balance beam with a score of 9.675, earning her First Team All-American honors. Lee lead the Blue and Gold to a 3–11 record this year after ranking second in the nation on balance beam in adjusted scoring average by the NCGA at 9.7.

Lee is the 83rd All-American in program history and the 16th gymnast to earn All-American for the balance beam.

Junior Megan Harrington was the last Bomber to earn All-American in status placing seventh in the all-around competition last season. The last All-American gymnast to garner an honor on the balance beam was Chelsea Robie ’13 in 2012.

In an Empire 8 matchup against the Cardinals, sophomore attackmen Jack Shumway and John Januszkiewicz each scored three goals for the Bombers. Freshman attacker Jake Cotton led the team with four assists and collected two goals of his own. Junior goalkeeper Scott Sidnam totaled eight saves for the day, and helped the Bombers cruise to a 12–5 victory over St. John Fisher.

On March 28, the Blue and Gold defeated Cabrini by a score of 9–8 at Higgins Stadium. Neither team led by more than two goals over the course of the game as junior Eli Gobrecht dominated the defensive end of the field, causing eight turnovers. Other standout performances for the Bombers included a team-high four goals and two assists apiece for Januszkiewicz and Shumway, and two goals for senior attackman James Manilla.

The Bombers, who improved their overall record to 8–2, moved up in the national polls after both wins over the past week. They are now ranked 10th by the United States Intercollegiate Lacrosse Association Division III Coaches Poll and eighth in the LaxMagazine.com Division III Men’s Top 20.

Next up on the South Hill squad’s schedule is rival SUNY Cortland at 4:30 p.m.​ April 1 in Cortland, New York. The nationally ranked Red Dragons own a 4–4 record on the season.

The women’s lacrosse team split a pair of games over the past week: a 19–4 win at Elmira College on March 24 and coming up short against SUNY Cortland on March 26 by a score of 13–10.

Junior attacker Ally Runyon led the team with four goals against the Soaring Eagles, while four others also tallied a pair of goals.

Sophomore goalkeeper Emily Ross tallied one save in the first half for the Bombers. Freshmen Kelsey Fee and Kimberley Presuto each earned playing time in the second half. Fee had one save, while Presuto made two saves for the Blue and Gold.

Ten different players scored in the matchup, improving their conference record to 1–1 in the Empire 8 conference.

Against the Red Dragons, Runyon again had a fantastic game, scoring five goals while registering one assist.

Ross recorded six saves, but it wasn’t enough to secure a Bomber victory.

The Red Dragons dominated the game, outshooting the Blue and Gold 25–19. Cortland also controlled the turnover battle, forcing the Bombers to have four more turnovers than the opposition, 18–14.

The South Hill squad will look to bounce back with its 3–5 record in its next game which will be home on April 3 against the Hartwick College Hawks at Higgins Stadium.

They will play again on at 1 p.m. April 4 against Stevens Institute of Technology at Higgins Stadium.

The men’s tennis team had a roller coaster week, dropping its first match of the week to Connecticut College 0–9, then bouncing back just two days later to defeat Utica College 9–0.

On March 29, the Blue and Gold suffered a defeat at the hands of the Camels, dropping their record to 4–5–1. The No. 1 doubles team of sophomore Wes Davis and freshman Jack Melhorn came the closest to defeating their opponents, falling 9–8 in the closest match of the day.

Then, on March 31, the Bombers shutout the Utica Pioneers by a score of 9–0, putting them back at .500 on the season. Melhorn and sophomore Nate Wolf defeated their singles opponents in straight sets. Davis, junior Chris Hayes and sophomore Charlie Vaca won their matches as well. The doubles teams of Davis and Melhorn; Hayes and Wolf; and sophomore Brandon Buskbaum and Vaca each defeated their Utica opponents in the match as well to round out the day for the Bombers. The win puts the team’s Empire 8 record at 3–0.

The South Hill squad will look to win its second match in a row when it travels to nationally ranked Stevens Institute of Technology on April 3. Stevens is 6–5 overall this season.