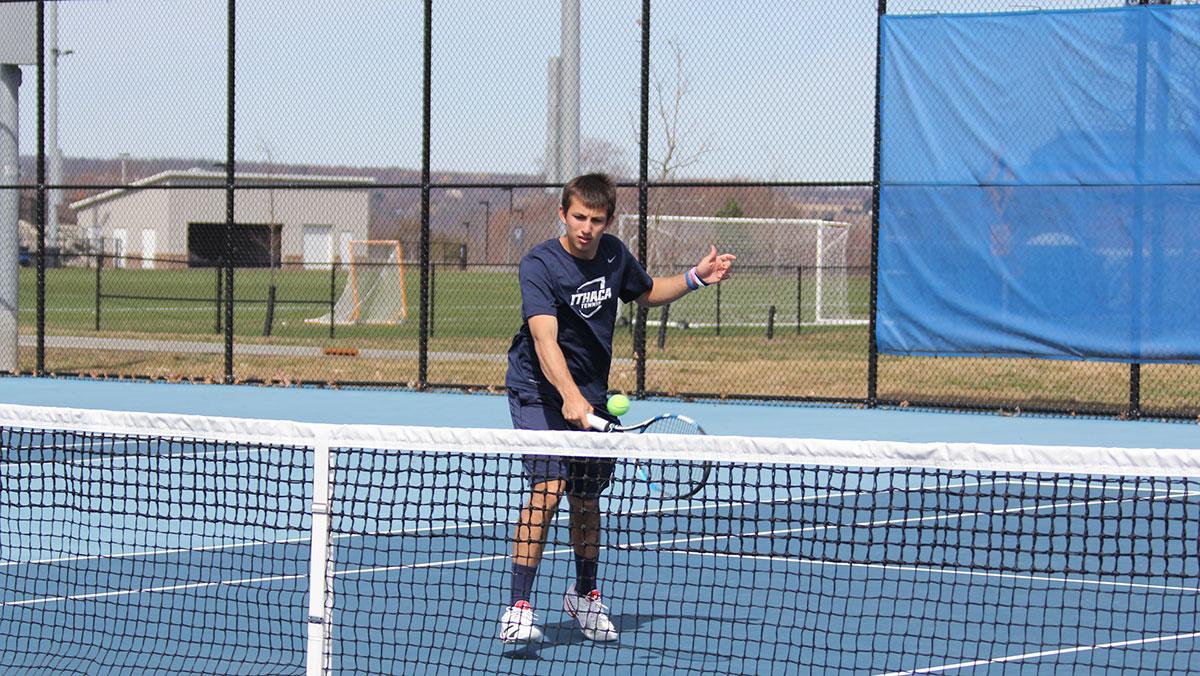 Caitie Ihrig/The Ithacan
Junior Chris Hayes backhands the ball during the men’s tennis team’s 7–2 victory over the Nazareth College Golden Flyers on April 19 at Wheeler Tennis Courts. The Bombers own a 7–7–1 record, after clinching a playoff spot April 21.
By Ithacan Sports Staff — The Ithacan
Published: April 22, 2015

The baseball team played a total of five games in the past week, including two doubleheaders over the weekend.

The Bombers suited up against the University of Rochester on April 16. They lost by a score of 5–4 as the opposing Yellowjackets scored four runs in the eighth inning. The Blue and Gold amassed 15 total strikeouts.

On April 18, the South Hill squad hit the road to take on Utica College. The team won both games 9–5 and 10–8, respectively.

The Bombers went 1–1 April 19, taking the first game 11–0, then losing the second game 3–0. Freshman Jim Sinopoli made his first collegiate start in the second game, allowing two runs on three hits in six innings of work.

The South Hill squad bounced back April 21 with a 9–4 home win against Elmira College.

Head coach George Valesente said the team must continue to win games down the stretch.

“We’ve got to go on a streak,” he said. “We’ve got to put together an eight, 10, 12 game winning streak here if we can. We need to continue to build on what we’ve done since we’ve been back home.”

The Bombers were back in action April 22, travelling to SUNY Oneonta. Score was not available at press time.

Both crew teams traveled to compete April 18 in Worcester, Massachusetts. The Bombers competed against over six schools.

The men’s first varsity boat crewed a time of 6:20.47 to finish fourth overall in the final heat. The second and third varsity boats took second place each in their heats with times of 6:26.65 and 6:42.91, respectively.

Head coach Becky Robinson said her team managed success over the weekend due to its training for the middle of the race.

“The race in Worcester is always a test for us in terms of where we are with boat speed,” she said. “It was also great to beat rival William Smith [College], it has been a few years since we had the speed to be able to do that.”

The Bombers return to their home waters to host Marist College, Hamilton College and Colgate University on April 25 at the Cayuga Inlet.

The men’s lacrosse team overpowered Hartwick College on April 18 in a dominant 23–8 victory over the Hawks on Senior Day. The Bombers are now 10–4 on the season and 5–1 in the Empire 8 conference.

The team made sure to give themselves a lead early on, running up the score to 6–0 with only 3 minutes remaining in the first quarter. From there, they never looked back, dominating in face offs, ground balls and shots on goal.

By halftime, the Bombers led 15–2. The victory was a collective team effort, with 11 different players contributing goals and nine players adding assists for the Bombers. Sophomore attacker Jack Shumway led the way with four goals, and senior attacker James Manilla added five assists for the day.

“I like the challenge and take it head on,” he said. “Other players have stepped up big as well. Jack Shumway, obviously, is having a great year, and James Manilla. It’s hard to guard us three.”

Next up for the Blue and Gold is their matchup against Alfred University at 4 p.m. April 22 at Higgins Stadium. The South Hill squad will finish out the regular season in Hoboken, New Jersey, against Stevens Institute of Technology at 11 a.m. April 25.

The women’s lacrosse team went 2–1 this past week, earning victories against Empire 8 foe Houghton College and No. 7 Hamilton College, while losing to SUNY Geneseo.

They fell to Geneseo on April 17, however, the Bombers quickly responded April 18 with an offensive explosion against Houghton, winning by a score of 17–3.

The whole team contributed with 12 different players putting the ball in the net at least once.

On April 21, the Bombers took down a ranked opponent in Hamilton College. They won the game by a score of 9–8 in a thrilling game at Higgins Stadium. Runyon and Marion each recorded three goals.

Cadwell and Marion each had two assists.

Head coach Shannon McHale said the key to beating Hamilton was sticking to its game plan and playing as a team.

“We stuck to our game plan, which we’ve been struggling with,” she said. “We came out with what our identity is and who we want to be, what kind of game we want to play. We came together offensively and defensively.”

The Bombers will wrap up their season April 22 at Utica College.

The softball team picked up five wins in six games this past week, sweeping doubleheaders against Nazareth College and the University of Rochester, and splitting a pair of games with St. John Fisher College. The five-game winning streak improves the Bombers’ overall record to 17–11 and 9–3 in the Empire 8 conference.

On April 18, the Bombers started off play against St. John Fisher, taking one of the two games. In the first game, the Blue and Gold were not able to muster any runs, losing 2–0. However, the team bounced back in its second game, picking up a 5–4 victory in 11 innings.

The team carried its momentum into its match April 19 to sweep a pair of games against Nazareth, winning the conference games by scores of 9–2 and 11–0. In the first game, the Bombers’ bats came alive to secure a 9–2 victory. The team won the next contest 11–0.

On April 21, the Bombers went on to play Rochester where they added another pair of victories to their record. They won the second contest 6–4, which marked head coach Deb Pallozzi’s 750th win at the college.

The Bombers return to action April 22 with a pair of games against SUNY Oneonta, which will mark one of the last four home doubleheaders of the regular season.

The men’s tennis team won both matches it played this week.

On April 19, the Blue and Gold won their match against Nazareth College with a score of 7–2 at the Wheeler Tennis Courts.

The Bombers won five out of the six single matches on the day and two out of the three double matches.

On April 21, the South Hill squad defeated Elmira College with a total score of 8–1 in Elmira, New York.

The team won five out of the six single matches and all three of the double matches. The win helped the team secure a spot in the Empire 8 playoffs.

Junior Chris Hayes said he was proud of his team for making the tournament and looks forward to the next match.

“It was good to clinch [a] spot in the conference tournament again,” he said. “The guys are very excited for the opportunity. We have two more matches this weekend though, so hopefully we can lick up the [No. 2] seed as well.”

The Blue and Gold will compete next April 25 in Oneonta, New York, against the Hartwick College Hawks.

The men’s team placed second overall as a team, finishing behind the host Cardinals.

Junior Stephen Gomez paved the way for the Bombers with a first-place finish in the 3,000-meter steeplechase with a time of 9:38.63, qualifying for the Eastern Collegiate Athletic Conference along the way.

Meanwhile, the women’s squad ran away with the championships, compiling 245 points, which was 148 more than the second-place team, Nazareth College.

It was the program’s eighth consecutive title as seven Bombers placed first in their respective events that day.

On April 21, the South Hill squad hosted the Tuesday Meet at Butterfield Stadium.

The Blue and Gold will compete next in the Penn Relays on April 23 and 24, before competing in the Big Red Invitational at Cornell University on April 26.