Rugby sevens team qualifies for nationals for the first time 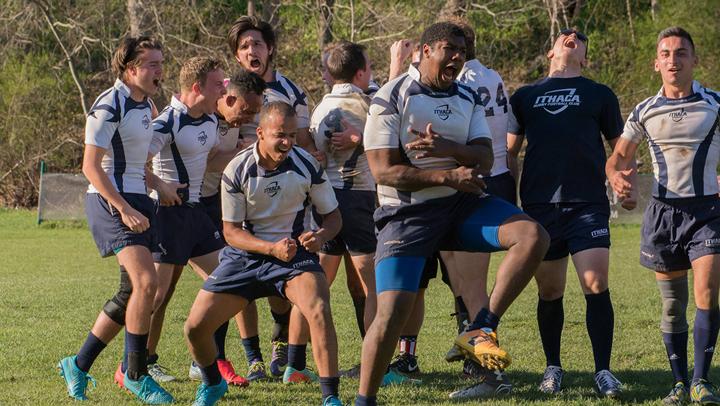 The Ithaca College men’s club rugby Sevens team showed off its talent when it qualified for the Sevens Nationals in Philadelphia for the first time by winning the National Small College Rugby Organization National Qualifier on April 16.

The team began to prepare for the qualifier in January. Head coach Annemarie Farrell said the team came back to Ithaca a week early after winter break and did double sessions to prepare for Nationals.

“They are working with Volt Athletics on a rugby-designed strength and conditioning program,” Farrell said. “Bombers Sevens will be practicing weekly through graduation before some players have to leave for internships and work.”

The team now practices 9–10:30 p.m. on the turf three or four days a week, Farrell said. Players begin with a passing warmup and dynamic stretches and then work on things from the previous game with Farrell. Farrell said practices are a build on gameplay rather than drills.

“I feel that having a focus on fun and match transferability are key to providing a great sport experience,” Farrell said.

The team began its season in Las Vegas for the Las Vegas Invitational on March 3, playing against varsity teams affiliated with the NCAA and other club teams.

“You learn more from losing than you do from winning,” he said. “There’s more to gain from a loss than necessarily a win because you’re not really looking for what you did wrong when you win.”

The team swept its home tournament March 19, playing teams that Tanguay said were similar in skill level to that of the Bombers.

“That was more of a confidence boost because we realized that this was what the competition was going to be closer to than what it was in Vegas,” Tanguay said.

The team also played against Syracuse University, a Division I team, in the Carrier Dome in Syracuse, New York, in a couple of scrimmages March 24 after the Vegas Tournament to prepare for the National Qualifier.

Although the team suffered tough losses at the tournament, Tanguay said they were able to use it to base its progress on.

“It was interesting to see how much we’d improved since Vegas,” Tanguay said. “We lost both the scrimmages, but they were a lot closer than the ones in Vegas.”

Many of the members of the team did not begin playing rugby until they got to college. Tanguay said half of the starters on the team just began playing in the fall. Senior Trevor Maycumber was named MVP of the NSCRO qualifier, and this was his first season. He credits the entire team to the win at NSCRO.

“Each of us played like MVPs. Each of us have different roles on the team,” Maycumber, who played football for the college for a year, said. “I may not be a great passer, but I’m going to work hard to compensate for that.”

Farrell said the team is now working hard to do well at Nationals and compete against the six other qualifying teams.

“We are focused on winning a national championship,” Farrell said. “This is what we have been working so hard for, so we are happy to get there. But we still have some work to do.”

The Bombers will be playing in the National Championship June 4–5 at Talen Energy Stadium in Philadelphia.