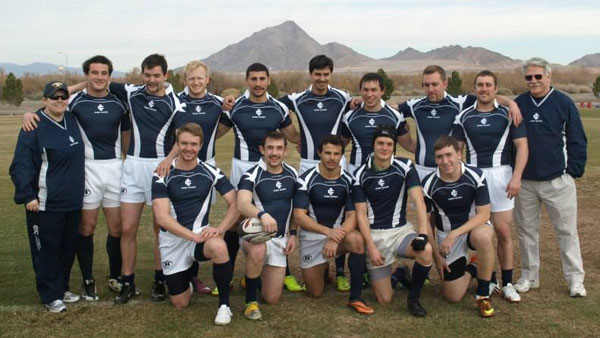 Courtesy of Annemarie Farrell
Players and coaches of the men’s club rugby team celebrate after playing a game in the Las Vegas Invitational on Jan. 23. The Bombers won two out of their three tournament games.
By Vinica Weiss — Staff Writer
Published: January 29, 2014

“What happens in Vegas stays in Vegas” is not a statement that applies to the men’s club rugby team, which returned to South Hill as a more cohesive squad.

The team competed in the Las Vegas Invitational, one of the biggest college rugby events in the world, from Jan. 23–25. The Bombers played against colleges from across the country, playing on the fields directly next to the stadium of the HSBC Sevens World Series, an international rugby tournament also held annually in Las Vegas.

The Blue and Gold advanced to the quarterfinals and finished the weekend with two wins. The squad beat Point Loma Nazarene College 26–0 and Air Force Academy by forfeit, but it lost to Georgetown University 26–5.

Senior Matt McDonald, flanker and captain of the team, said he will always remember  being a part of an environment where everyone was rooting for the sport of rugby and showing what a community it is.

“Rugby’s not like any other sport, it’s one big brotherhood,” McDonald said. “The fact that we’re playing so close to the best teams in the world is an incredible feeling. Everyone’s just got this connection, and it’s unlike anything you’ve ever felt before.”

Senior eightman Alex Kyler took a picture with the Trinidad and Tobago national team, and Weiss said this showed how rugby provides a universal connection.

“Rugby is an international language,” Weiss said. “Alex and the Trinidad players have nothing in common other than rugby, but it brings us together in a very tight-knit situation.”

With close to 70,000 fans attending the three-day tournament, junior lock Jeff Jaquith said the amount of people embodied the craziness of Las Vegas.

Weiss said the atmosphere surrounding the college games in comparison to the international competitions were more laid back but still intense, as fans would surround the field and cheer during the games.

The team competed in the men’s college sevens division, made up of 24 teams. This style of rugby requires fewer players than the fall season. Unlike traditional rugby union, which requires 15 players per team, rugby sevens is played with seven men per side and is more fitness oriented, catering to players who are quicker.

McDonald said going from a team of 15 to a team of seven changes the entire game.

“When you start playing sevens, it creates so much space that it gives so many guys the opportunity to show what they can actually do,” McDonald said. “The halves are only seven minutes long, so everything that the guys are doing, they are doing as hard as they can.”

To determine who would make it to the rugby sevens squad, head coach Annemarie Farrell and team captains, McDonald and Weiss, came together to select the tournament team before Thanksgiving.

“This game is really about how well we can be cohesive and play as a team, and it is important that we are all on the same page when playing,” Weiss said.

Farrell said the 13 players selected for the team returned to the college Jan. 5 to begin daily practices, which gave the team two weeks to train before the tournament.

Jaquith said practices were difficult and frustrating at first because most of the players had never played this style of rugby before. The players practiced for two or three hours every day in addition to weight room sessions.

Because rugby sevens is faster, the team put more of a focus on running. They also had to learn different offensive plays and defensive patterns that cater more to rugby sevens.

“It was almost as if we were learning a completely new sport within our sport,” Jaquith said. “We went from a sport that we barely knew to competing against Division I teams.”

While many of the teams the Bombers faced had been playing sevens since the fall, the Bombers only began in December.

Weiss said participating against talented teams in a different game style gives his teammates a greater appreciation of the sport.

“You don’t learn anything if you play competition worse than you,” Weiss said. “We get to see what really good rugby is played like, we get to play it with them, and we’ve been able to keep up with them and stay in every game.”

McDonald said he believes the experience is something that will be beneficial to the program in the future.

“Everything we accomplish is a milestone,” he said. “It gives the new guys coming up to the team something to look forward to and try to be. We’re always pushing ourselves.”