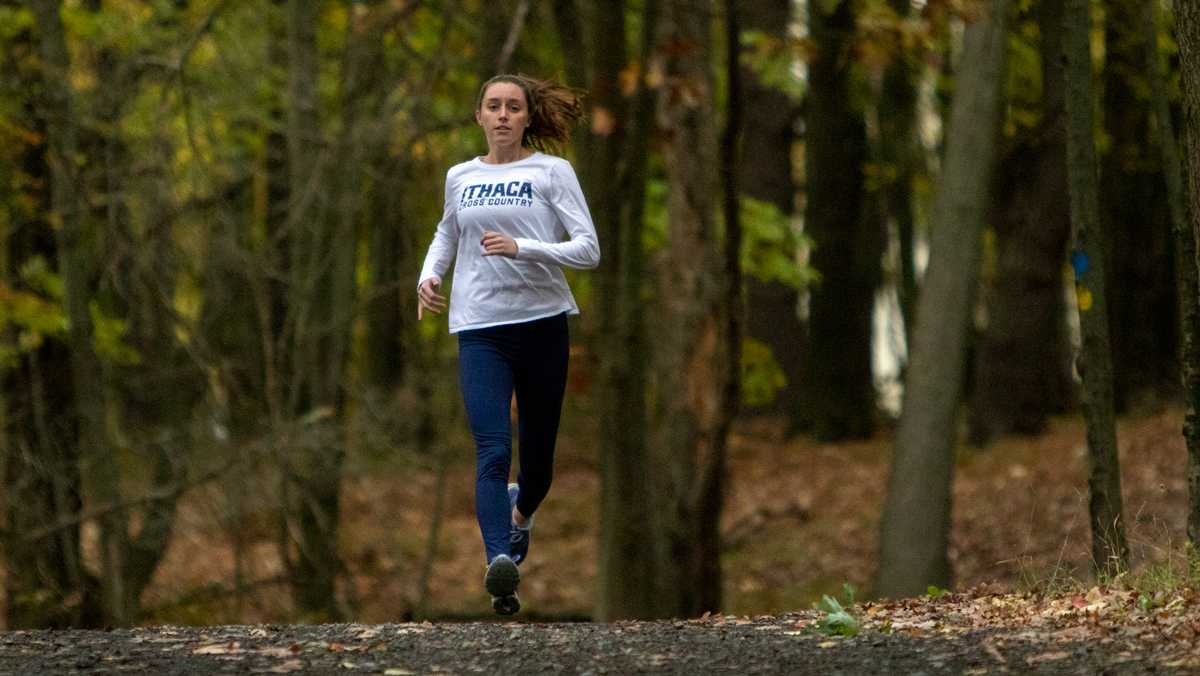 Collegiate athletics was not on junior Meghan Beahan’s radar when she began running cross-country during her junior year of high school. Now, Beahan has grown to become a consistent top–10 finisher for the Ithaca College women’s cross-country team.

Beahan’s journey to the varsity roster was a lengthy one. During her senior cross-country season in high school, she sustained stress fractures in both shins that kept her from running at all until May of that year. This meant that she did not have the results or the fitness level to be recruited and compete collegiately. However, she still had a love of running and wanted to remain involved at the club level after high school.

“Even though I couldn’t be on the actual team, I still wanted to be competitive, so when I got here and saw that they didn’t have one, I was upset,” Beahan said. “In spring of my freshman year, I talked to the club sports coordinator and got enough interest to start the running club here.”

Although she was having fun training and racing with the running club, she was not being challenged as much as she wanted to be.

“For club, the races are really small, so I was toward the front a lot,” she said. “I wanted to push myself more. Now I’m usually in the middle of races, and I like having more to work toward.”

The women on the cross-country team during the 2017 season had seen Beahan training and spoke both to her and to head coach Erin Dinan about getting her onto the varsity squad.

“One of the girls on the team told me about her and said, ‘Hey, you should talk to her and see if she’ll come out for the team,’” Dinan said. “We had a meeting last spring, and she sounded really excited about it.”

Beahan was concerned about training and racing more competitively with her history of injury, but she and Dinan have worked hard to ensure that she can stay healthy through the season.

“We talked about really being cautious and making sure that we would make sure what happened in high school didn’t repeat itself,” Dinan said. “She was really eager to run a lot, but we set up a plan where she has to cross–train a couple times a week. I’m certain that’s a little frustrating for her, but I think she sees that that’s the best setup for her to continue to perform.”

Beahan completes a portion of her training each week doing alternative workouts in the pool instead of running outside or on the track. This kind of low-impact cross–training reduces the pounding on her shins that long-distance running causes and decreases her chances of sustaining another injury.

Beahan has been contributing to the team’s success throughout the 2018 season. She has been among the top-10 finishers for the Bombers in all but one of the meets she raced in this year.

“I definitely have improved a lot,” Beahan said. “The consistent training helps. When I was running club, if I wanted to take a day off, I could, and it’s not like that anymore. Erin is also a great coach, so having her to push me has helped me a lot.”

Beahan has also enjoyed the team aspect of varsity cross-country that was not present when she competed with the running club.

“I love having a sense of team,” she said. “I made a lot of friends with running club, but it’s a lot different running varsity because we spend so much time together, and we train together every day. It’s been really nice getting to know everyone so well.”

Senior captain Hailey Nase believes that Beahan has fit in well with the rest of the women and that having so many new runners, including Beahan, has made the team stronger.

“Meghan is a very positive and supportive teammate, and she’s also in the top for our team,” Nase said. “She has really shown her dedication, talent and heart during some tough meets. I’ve been so impressed with all the newbies. They have really been a breath of fresh air for this team.”

After a successful first season, Beahan is excited about what lies ahead.

“I definitely plan on being on the cross-country team next year,” she said. “I might go back to club for the spring to get the best of both worlds, but I’m not sure yet. They might suck me into track too.”