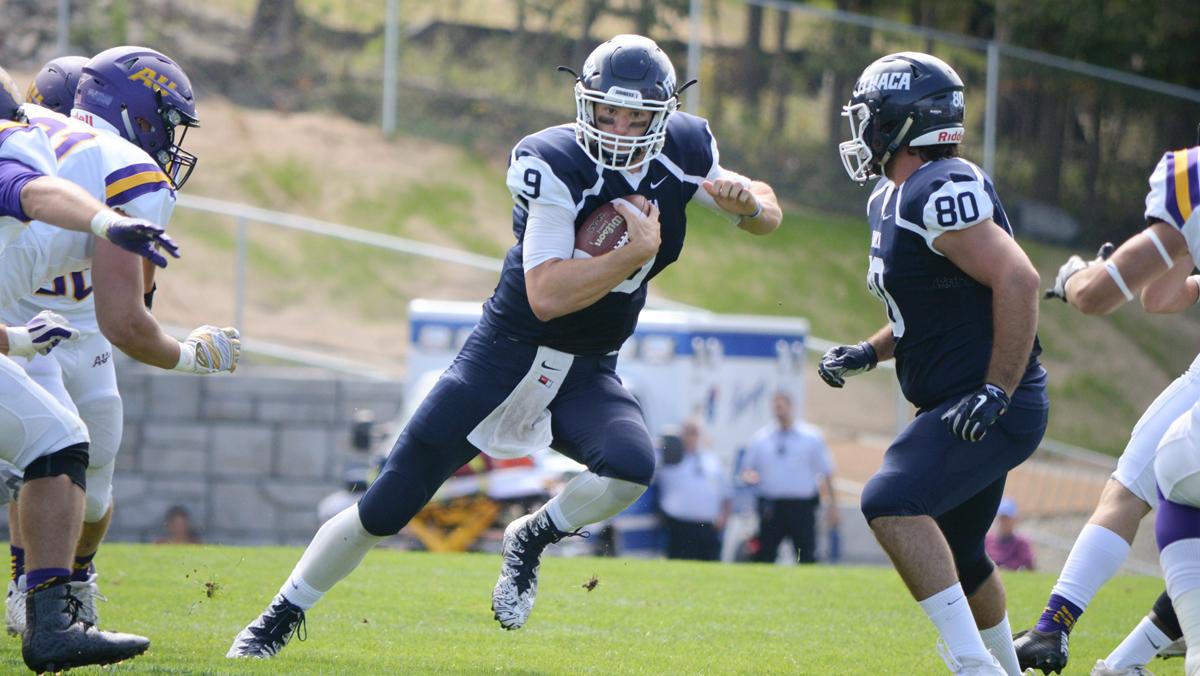 The Saxons started out strong in this game with a nine play, 69-yard drive that ended in a 2-yard touchdown run from senior running back Maleke Fuentes. The Bombers failed to respond as their drive ended on a missed 38-yard field goal attempt from junior kicker David Prudhomme.

The Saxons’ next drive ended on a failed fourth-down conversion after they successfully converted on fourth down earlier in the drive.

The Blue and Gold’s offense found their stride in the second quarter as Fron connected with sophomore wide receiver Will Gladney for a 21-yard touchdown to tie the game at seven.

After three consecutive three and outs between the two teams, the Bombers added seven more points to their total when Fron reached the endzone on a 52-yard run. Fron said he had been looking forward to an opportunity to show his ability on the ground and he could not have done it without good blocking.

“That was a ton of fun,” Fron said. “I’ve been waiting to do something like that for quite some time. I got great blocking on that play. The line didn’t let anybody through. Kendall Anderson gave me a great block in the backfield, and my boy Will Gladney sealed the deal right at the end with a great block, and I owe him for life for that block.”

The Saxons responded on their ensuing drive as they gained 53 yards in two minutes and 48 seconds, capped off by a 16-yard pass from junior quarterback Bryce Morrison to junior tight end Chris Harders. Alfred kicker Trevor Monk missed the extra point attempt, allowing the Bombers to hold on to a one point lead. 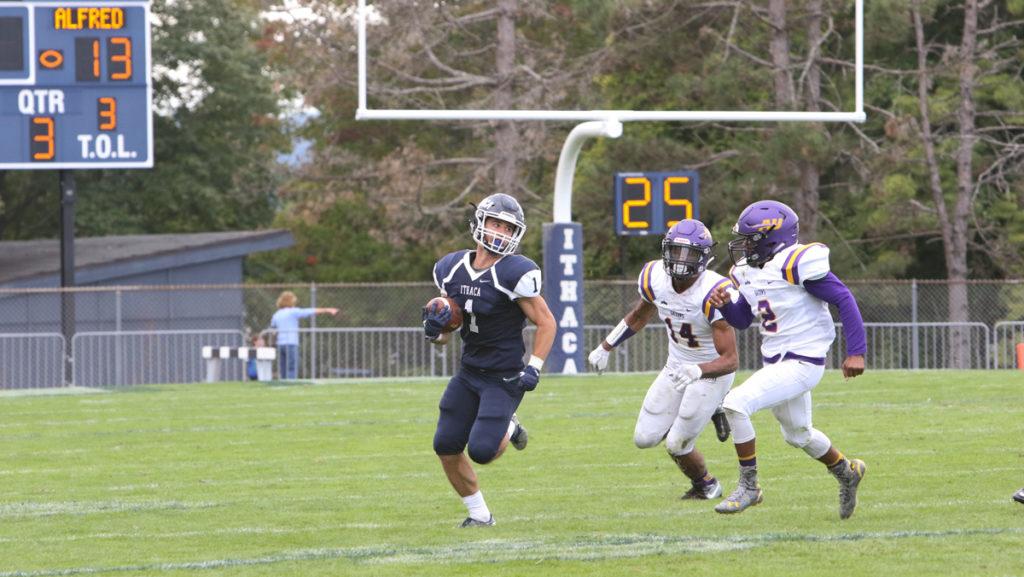 The Bombers extended their lead to 17–13 before the end of the first half when Prudhomme split the uprights on a 37-yard field goal with 3.87 seconds remaining in the second quarter.

Neither team was able to create anything offensively in the third quarter as all but one drive ended in a punt. Alfred had the only scoring attempt of the quarter when Monk missed a 27-yard field goal attempt.

The Saxon’s first drive of the fourth quarter was riddled with penalties but was finished off with a 26-yard pass from Morrison to junior wide receiver Jayden Gavidia for a touchdown to take the lead 20–17. The Bombers failed to convert on fourth down when senior wide receiver JR Zazzara was unable to keep a foot in bounds to secure a first down. The South Hill squad stopped the Saxons and had one last chance to come back until Fron threw an interception to Alfred sophomore defensive back Kyle Moore.

Alfred head coach Bob Rankl said his team had the character to mount a winning drive in the fourth quarter.

“This team has the ability to fight through adversity,” Rankl said. “Playing at Butterfield Stadium isn’t easy, but we managed to fight hard enough to get the win.”

The Bombers scored all of their points in the first half, and Swanstrom said he liked some of what he saw but plenty of work still needs to be done.

“There were a lot of ups and downs today,” Swanstrom said. “This was our team’s first time playing in completely new systems on offense, defense and special teams. It wasn’t all negative but it was certainly far from where we want to be as a football program.”

Fron completed 13 of 29 passes for 156 yards with one touchdown and one interception in his first start. He said he felt good, but the team needs to be able to play complete football games.

“I was extremely comfortable coming in, and we came out really strong, scoring all of our points in the first half, but we need to be better at playing full games,” Fron said.

Swanstrom said he liked much of what he saw from his first-time starter can only get better as he gets more experience. 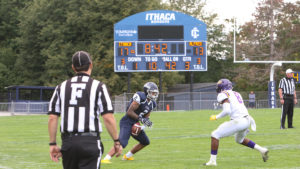 Sophomore wide receiver Will Gladney drops the ball against Alfred University on Sept. 2.

“We got to see him make some great throws today, and he also showed us how special he can be athletically,” Swanstrom said. “He did miss some throws he normally makes, but that will come with him getting his feet grounded as a quarterback.”

The Bombers will return to action at 2 p.m. Sept. 9 in Brockport, New York, to take on SUNY Brockport. Swanstrom said he has high expectation for his team going into its next game.

“We showed today that we have a lot of pieces, and now that they have some familiarity with all of the changes, I am expecting a big jump from week one to week two,” Swanstrom said.