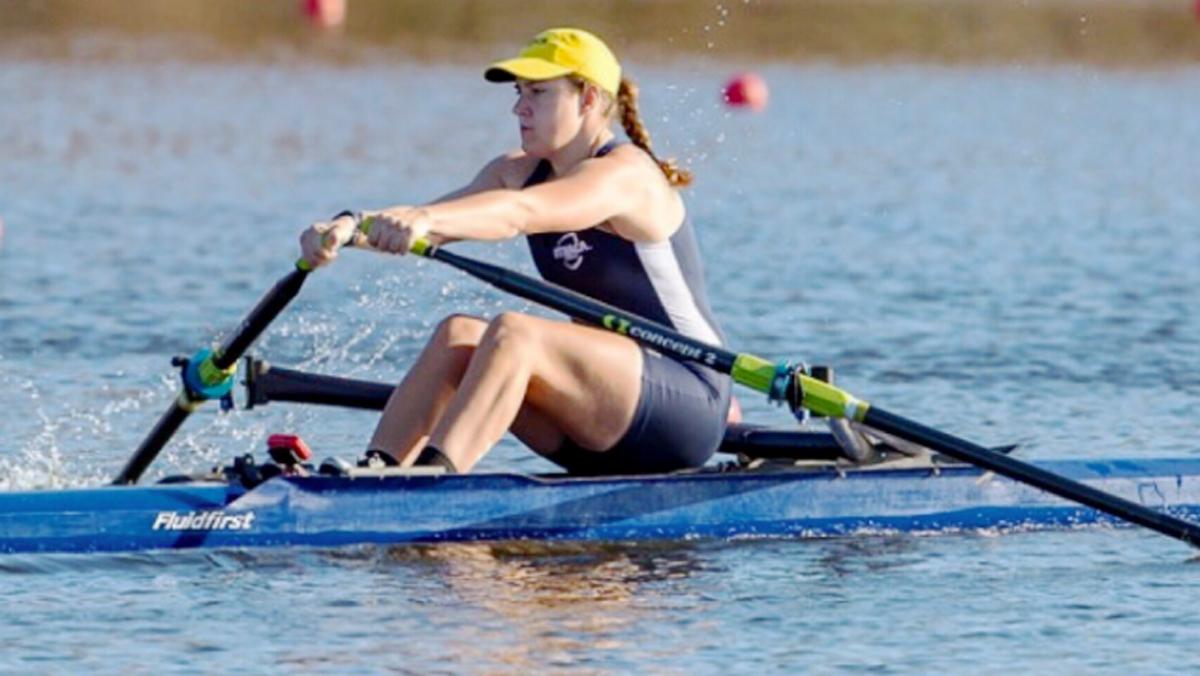 Photo Courtesy of Savannah Brija
Junior Savannah Brija competes in the Collegiate Small Boat Championships on Nov. 6, 2016. Brija placed first in the Single B Final with a time of 8:35.78. Prior to joining the sculling and crew teams, she played soccer since she was 9 years old.
By Andrew Sullivan — Senior Writer
Published: August 30, 2017

A swooshing sound of indoor rowing machines consumed the second floor of the Ithaca College boathouse as a men’s and women’s crew teams’ practice was in session. Both squads were mixed together and split into two groups to row grueling 2K exercises on 25 to 30 ergometers. The first cluster, which included senior Karina Feitner, was already in motion and more than halfway through the routine.

Feitner was on pace for a swift time of just over 7:00 but could feel her muscles gelatinizing towards the home stretch. With approximately 300 meters to go, she heard senior Savannah Brija utter one simple summons from behind. “Beat me,” Brija said.

Whether it be in the boathouse or out on the waters, Brija brings an uplifting voice to the sculling and women’s crew teams.

Brija, who never rowed before entering college, decided to pick up the sport of rowing during the spring semester of her freshman year with the persuasion of a few friends who were on the crew team. At the organization fair, assistant coach Beth Greene also encouraged Brija to join the team.

Last fall was her first season with the sculling team, and Brija proved to be one of the top scullers for the Blue and Gold with her first–place finish in the Singles B Final at the Collegiate Small Boat Championships.

Prior to joining the sculling and crew teams, Brija played one season with the women’s soccer team in the fall semester of her freshman year. She has played soccer since she was 9 years old. As a forward, she netted two goals and chalked up four points in five games for the Bombers.

Brija said her blueprint was to play soccer in the fall and row in the spring, but with time constraints and not enough energy to spend between both, she said she had to make a choice between the sports. She chose crew during spring break of her freshman year and said she misses playing soccer at times but has no regrets about the decision she made.

Since joining the sculling and crew teams, Brija has added an energizing flavor to both rosters with her confident, competitive nature. She said this comes from the winter workouts with the women’s crew team.

Feitner said Brija is not shy about exerting her personality with her teammates. She recalled a time this past season when Brija spoke up to some anxious senior crew members leading up to nationals.

“Everyone was feeling, ‘Oh gosh, we have to get better,’ and that spread some bad attitudes in the boat for a little bit,” Feitner said. “She wasn’t afraid to put some of the seniors in check and be like, ‘Hey, cut that out. We can’t have that right now.’”

While some of the upperclassmen embraced her personality, Becky Robinson, the women’s crew and sculling head coach, said other upperclassmen were taken aback and approached Robinson with concerns.

“I was like, ‘No, this is the kind of person you want to be rowing with, who you want to be in the boat with: somebody who’s really competitive but upbeat … about it,’” Robinson said.

With the encouragement from Feitner, Brija said, she decided to learn how to scull after her first season with the crew team. Brija learned the ins and outs in a one-week camp run by the women’s crew coaching staff. She then returned home to Lemont, Illinois, and joined a sculling club called RowAmerica St. Charles and sculled for four days a week for two months.

“I know for many people, it’s a difficult thing to do because you learn this new sport of rowing and then just when you start getting good at it is when people start to learn how to scull,” she said. “But I decided that I wanted to try to learn how to scull right away while I was still learning how to row so that while I was in this whole new phase of learning, I was hitting it all at once.”

Now an upperclassman, Brija said she never second–guesses expressing her candid self around her teammates, whether it is to challenge them or lift their spirits.

“I know for me, when someone just gives me a little compliment, it’s like a little booster,” Brija said. “So I just want to share that with other people too because crew is really hard and … every time someone’s work is validated, the hard work they put in really shows. It just makes our team culture that much better.”