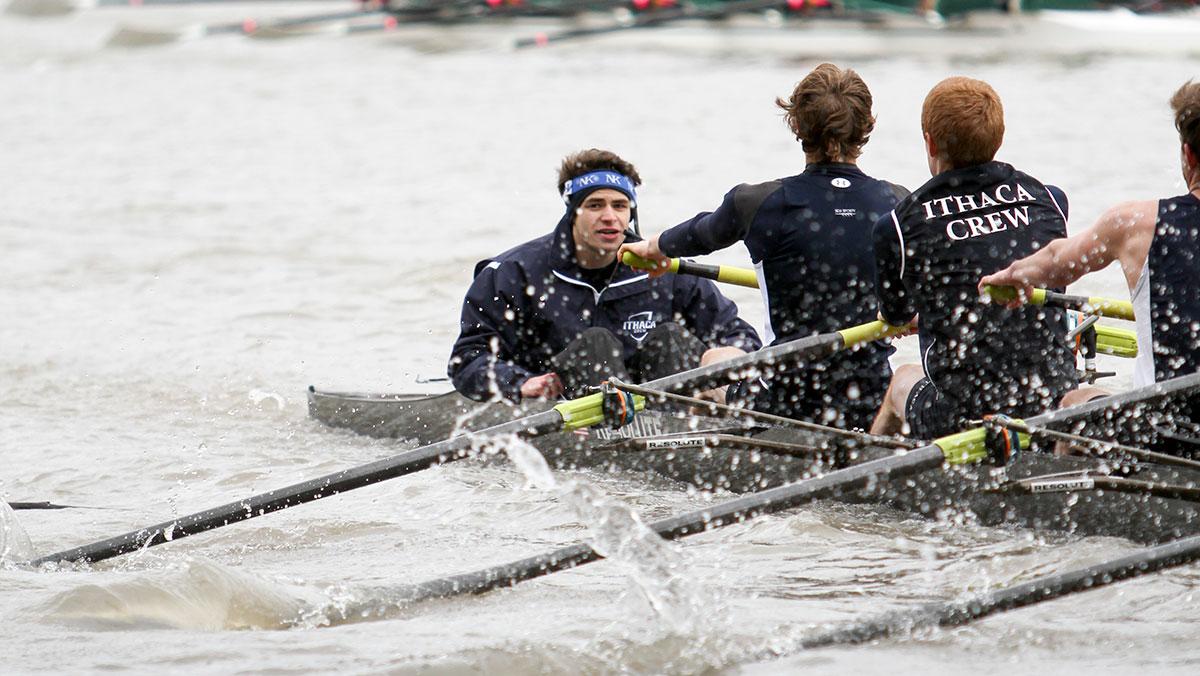 Coxswains originated as large Vikings at the stern of the ship that beat a drum to get his crew in sync. But now for the men’s crew team, it’s the lone male coxswain — tall, thin, sophomore Johnston Tucker — who looks nothing at all like a Viking in his own words, although they are analogous in many ways.

There is plenty that goes into being the coxswain as they are in charge of steering the boat, having the best vantage point sitting in the stern of the boat. As the navigator for the men’s crew team’s first varsity boat, Tucker said having the physical components of a coxswain translate to his success, despite being the only male in a female-dominated position on the team.

“Obviously you want your coxswain to be light – you don’t want your crew to be hauling around an extra 50, 60 pounds,” Tucker said. “I weigh around like 130 [pounds], so I just have to keep my weight down so that they can go as fast as they possibly can.”

Head coach Dan Robinson said the relationship between a coxswain and a coach is very important to the dynamic of a team.

“The coxswain, when they agree to the position, are automatically leaders,” Robinson said. ”You’re just not going to do it if you don’t want to be in that spot. So the coxswain is the leader of the boat, and they basically are along the roles of an assistant coach.”

In many ways, Tucker is the assistant coach for the team. Robinson will follow the crew around during practices in a motorboat giving out commands and adjustments, but it is Tucker who tells the rowers what type of workout they need to be doing.

Each day before getting in the water, Robinson hands Tucker the workout schedule and has him take it from there. On race days his responsibilities are even greater, as coaches are not allowed to be on the water. It’s up to Tucker to direct his teammates.

Robinson said Tucker knows the ins and outs of a crew boat, which makes his teammates feel more comfortable during a race.

“He tells the crew what to do,” Robinson said. “He’ll correct mistakes, he’ll comment on the feel of the boat to the crew … have ideas on how to correct and make the boat feel better. Make the row feel more smoothly.”

During his time at New Canaan High School in New Canaan, Connecticut, Tucker first began crew as an activity to do between sports seasons and later found that he enjoyed it, earning three varsity letters in the process.

He was originally recruited as a rower at the college, however, he attracted mononucleosis, a contagious disease transmitted through saliva, during the summer of 2013 and ultimately lost 10 pounds by the time he arrived on campus. Not wanting to give up on the sport, he decided to join the team as a coxswain and workout on his own to build his strength back up. However, he found a new passion in the position.

Robinson said the coxswain’s role in motivating the other rowers during a race is how a boat can succeed in the water.

Tucker said having the ability to motivate and make the rowers go to the next level is a very important part of his job.

“Motivation is my last role where it’s just motivating the guys to break through that mental barrier,” Tucker said. “Let’s just beat these other crews here and get to the line.”

Tucker has led the Bombers to three first-place finishes in the first three competitions of the season, recently beating St. John Fisher College and Geneseo College on April 12 on the Cayuga Inlet.

Tucker said he has set high expectations for himself as only a sophomore, having to coxswain the first varsity boat for the team.

“I mean it comes back to that leadership,” Tucker said. “You’ve got to be confident and cool in your position, otherwise the guys aren’t going to trust you. You’ve always got to have control of the situation, so if something goes wrong, your first instinct [is] ‘There’s a problem, how do I address it?’”

Senior captain Charlie Enright said Tucker plays a very important role to the crew team and wants to see him stick around for the future.

“Johnston has met and excelled past every expectation we had for him this season,” Enright said. “He’s showed a maturity and skill set far beyond just the two years he’s been coxing. He has a passion, enthusiasm and work ethic that allows him to command respect from the rowers. I’m excited to see how he continues to develop in the coming years.”

Tucker said he plans to stick with coxswaining for the near future and has no plans to give up the position or the sport.

“I ended up being good at coxing, so I stuck with it and that’s what I’m going to do until I graduate,” Tucker said.