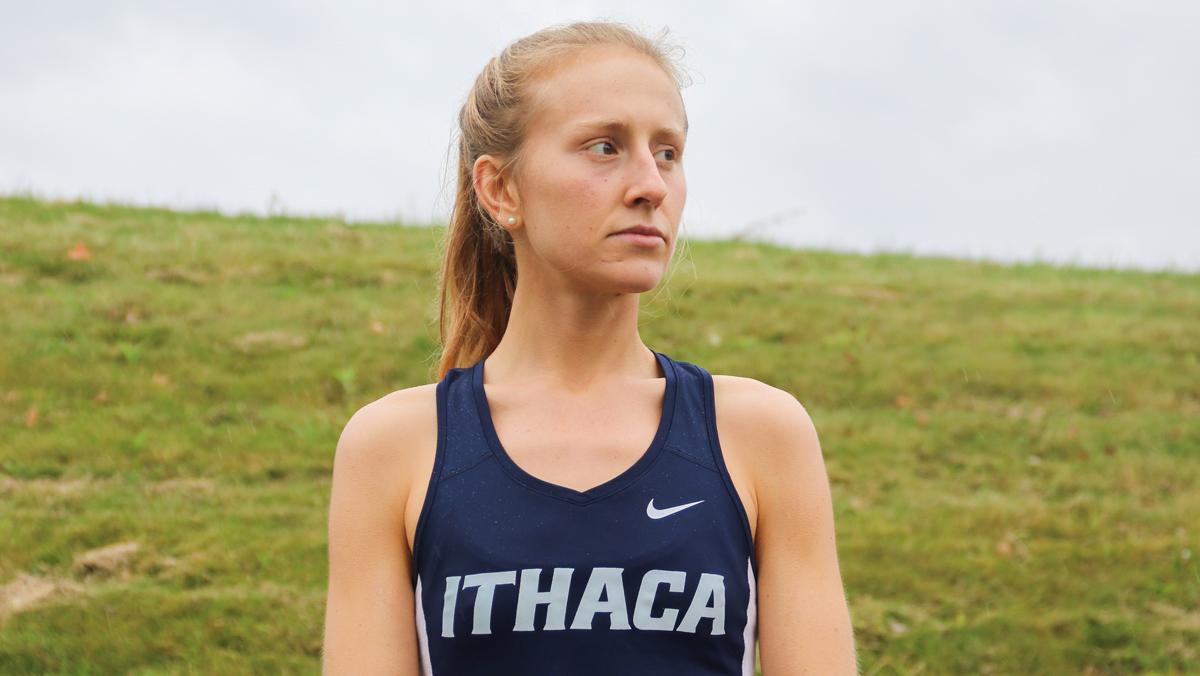 Athina Sonitis/THE ITHACAN
Senior runner Parley Hannan has become one of the staple athletes for the Ithaca College cross-country team. Out of six races so far this season, Hannan won four and placed in the top three in the other two.
By Julia DiGeronimo — Contributing Writer
Published: November 7, 2019

Senior cross-country runner Parley Hannan has not had an easy path through her collegiate career. However, after overcoming an eating disorder and academic challenges, Hannan has become a star of Ithaca College women’s cross-country team.

Out of six races so far this season, Hannan won four and placed in the top three in the other two. At the Connecticut College Invitational on Oct. 19, Hannan smashed her previous personal best for a 6K course by over a minute with a time of 20:52.2. She also set a new course record.

“That was the moment I realized my full potential,” Hannan said. “I always compare myself to other runners and other times, and to run in such a competitive field of runners and win, … I think I realized who I am. … That moment was probably the best moment of my life.”

At the Liberty League Championship on Nov. 2, Hannan placed first with a time of 21:19.9. She also set the record for the largest margin of victory by 1:21. The record was previously held by Taryn Cordani ’18.

Hannan has been named the United States Track & Field and Cross Country Coaches Association National Athlete of the Week twice this season. Hannan is the first woman in Division III cross-country to earn the title in back-to-back weeks. She was honored for her victory at the 28th Annual Ronald C. Hoffmann Invitational on Oct. 12 and again for her performance at the Connecticut College Invitational.

Before Hannan began her career at the college in 2018, she attended the University of Colorado from Fall 2015 to Spring 2016 and Northeastern University in Fall 2016 before taking a medical leave for depression and anxiety the following spring. After changing her major three times and transferring to Ithaca College, Hannan said, she believes that she belongs with the Bombers’ cross-country team.

“I don’t think I would have been able to or wanted to do sports at the other schools,” Hannan said. “I think that Ithaca has a very special team.”

Hannan said school has never been easy for her. She did not begin running competitively until she came to the college, but, she said, it has always been a way for her to forget about her struggles.

“Running has always been my therapy and my outlet,” Hannan said. “I’ve taken two and a half years off of school, one in my sophomore year of high school and then one my sophomore year of college, and then last semester I took a medical leave. The only thing that kept me sane during it all was running.”

Hannan has struggled with an eating disorder in the past, and it led to her leave of absence during her sophomore year of high school. She said she began running in high school to get into better shape but then started dieting and cutting certain foods out, and this is when her mentality shifted from staying in shape to an eating disorder.

“It really inhibited me from reaching my potential, and at that point, I didn’t even know my potential because it was my first season running, so I didn’t really have anything to base it off of,” Hannan said.

Hannan said she took this past summer to work on herself. She also ran a 15K at the 42nd Annual Utica Boilermaker Road Race on July 14, which Hannan said gave her a positive outlook about the impending season. Head coach Erin Dinan said she was not surprised to see Hannan’s improvement.

“I don’t usually have expectations of anyone going into the season because we have to see where we’re at as the season progresses, but I kind of knew that she would be coming at it in a different spot than she had been,” Dinan said.

Senior teammate Lindsay Scott joined the cross-country team for the first time last fall along with Hannan. Scott said Hannan has become the hardest worker on the team.

“I’ve gotten to watch her day in and out from the summer set her mind to her goal for the season and do everything in her power to get there,” she said. “Every day she inspires each and every one of us on the team that there is no limit.”

Hannan said that despite her accomplishments on the course, she is proud of herself for becoming a better teammate. Because of her struggles with her mental health, Hannan said, she tended to isolate herself to avoid having a negative impact on the team. She said that this year, she was able to host team bonding events and spend more quality time with the other runners.

Dinan said she has seen how supportive Hannan has been toward the rest of the team amid her personal successes.

“She is a very deep feeler and somebody who really wants the best for everybody,” Dinan said. “Oftentimes when people are at that different level, they would think that they are thinking only about themselves, but she’s not that way at all. She’s always checking in.”

Hannan’s season is not over yet. The NCAA Regional Championship will be held Nov. 16 in Canton, New York, and Hannan can qualify for the national championship if she places in the top seven at the regional meet or if the Bombers qualify as a team to compete at nationals by finishing in the top two. Hannan said she is excited about the opportunity to keep improving as meets get more competitive.

“It wasn’t until my first race that I was like ‘Oh, I’m on fire,’” Hannan said. “I didn’t think I was going to be where I am right now, but at the same time, I can’t be that surprised because this is where my heart and soul is.”