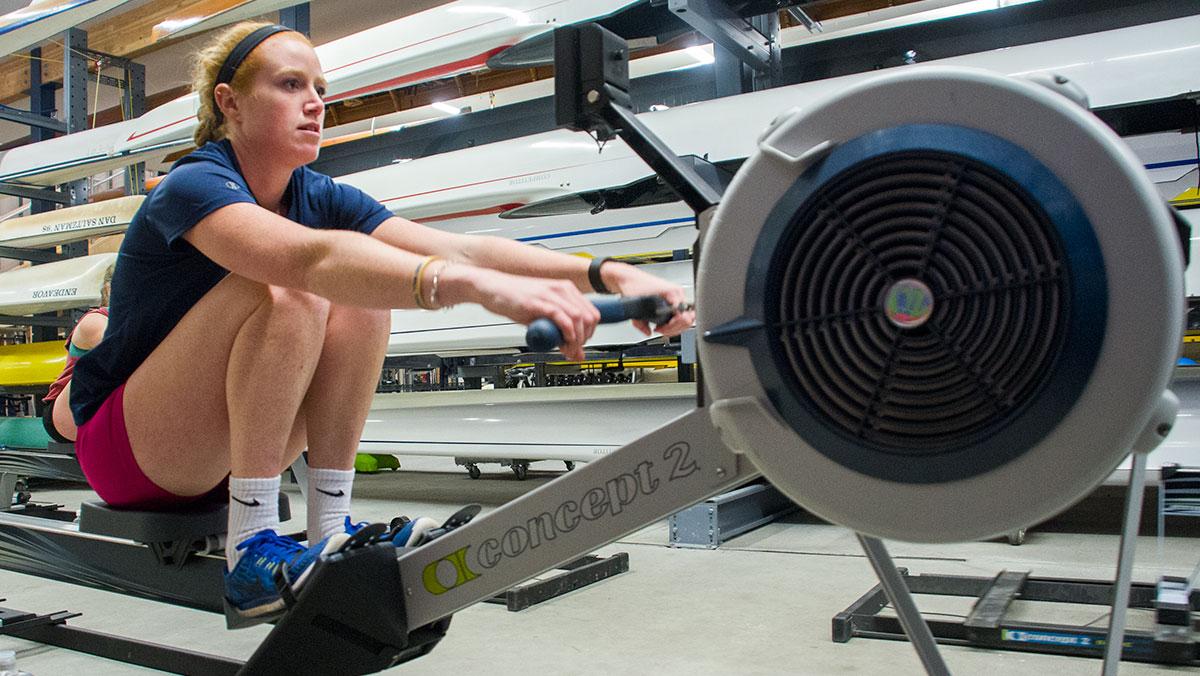 SAM FULLER/THE ITHACAN
Senior Emily Morley practices at the Robert B. Tallman Rowing Center at the Cayuga Inlet on Feb. 15. She will compete at the Rio de Janeiro Olympic games on Aug. 5–21.
By Danielle Allentuck — Sports Editor
Published: April 7, 2016

After placing 10th at the FISA Olympic Rowing Qualification Regatta for the Americas in Valparaíso, Chile, on March 22–24, senior Emily Morley has officially qualified for the 2016 Rio de Janeiro Olympic games. She will become the first Bahamian rower to compete at the Olympics.

Morley found out April 7 that she will be representing the Bahamas through a wild card bid, which selects athletes from countries where rowing isn’t popular in an attempt to grow the sport.

“Since I was the only Bahamian to compete in that competition and in the history of rowing, I guess they saw that I was really competitive and thought I would be a good candidate to be selected for Rio,” Morley said.

Morley competed in the women’s single event at the qualification. She said she was very nervous before the event but was able to get through it and go out and compete.

“I had my coach and my teammate with me, so I was really lucky that I had a really good support system,” Morley said. “I was feeling really nervous, but I knew I just had to get on the water, and I’d be OK.”

At the qualification event, she competed in four races. The competition began with heats March 22, and Morley was placed in the fastest heat, as four out of the five people who were racing in that heat later made it to the A final.

After the heat, she did not qualify straight to semifinals and had to compete in the repechage later that afternoon. In the repechage, she came in second and qualified for the AB semifinal. On March 23, she placed fifth in the semifinal, and that qualified her for the B final. In the B final the following day, she placed fourth, which put her in 10th place overall.

Morley said that after the regatta, she did not think she was going to participate in the Olympics.

“Leaving Chile, I knew I was most likely not going to get a bid,” Morley said. “I had no hope of going. I didn’t think I was going to go.”

Then, when Morley was told she earned a bid, she said she did not believe the news at first and is very excited to be able to represent the Bahamas this summer.

“To be honest, I’m really shocked right now,” Morley said. “I didn’t think it was real at first. I’m really ecstatic, and I wouldn’t have been able to do it without my dad, coach, team and the Olympic Association back in the Bahamas.”

Head coach Becky Robinson said this makes up for the disappointment they felt when they left the qualification.

“I’m still numb right now. It’s fantastic,” Robinson said. “The hardest part was watching her perform at best and achieve at her best and then not earning a spot right there.”

Graduate student Jennie Peterson said it was amazing to see the team come together, and that she is proud of Morley.

“It’s just incredible that we were all able to support her and give her the positive energy and words that she needed up to this point,” Peterson said. “But honestly, the hard work was all done by her.”

The Olympics will run from Aug. 5–21. Morley said she is honored to be the first Bahamian rower to compete at the Olympics.

“I’m really excited, and I don’t know what’s next or what the plan is,” Morley said. “It’s very exciting not just for me or my team, but for Ithaca College and the Bahamas rowing association as well.”