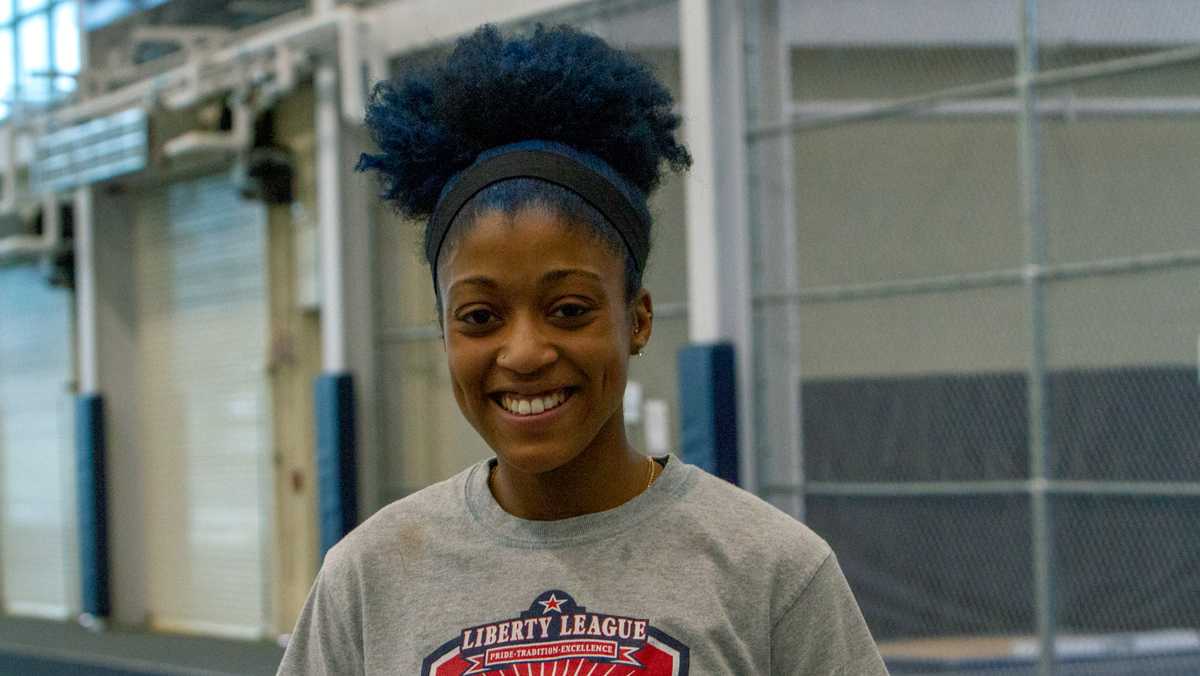 Shehanee Fernando/The Ithacan
Senior track captain Jordan Beckley has competed in sprint events and the long jump for the Blue and Gold over her four years and is excited about what is to come for the team.
By Jack Murray — Sports Editor
Published: February 12, 2019

The Ithaca College women’s track and field team lost several key seniors after its 2017–18 season. Losing strong leaders, like Taryn Cordani ’18 and Katherine Pitman ’18, could send most teams into a tailspin, but the Bombers have been able to keep pace due to some current seniors taking on leadership roles.

Senior Jordan Beckley was named one of the captains for the 2018–19 indoor and outdoor track season. Beckley was named to the Liberty League Outdoor First-Team for the 4×100 in the 2017–18 season and has competed in various short distance sprinting events for the Blue and Gold, as well as being one of their top long jumpers.

Sports Editor Jack Murray spoke with Beckley about how the team has stepped up, where they can improve and what being a Bomber has meant to her.

Jack Murray: You are one of the senior captains on this team, how has that experience been?

JM: How has being a captain changed your relationship with the coaching staff?

JB: I definitely see myself now as a liaison for the girls — just to be able to bridge the gap between Coach Potter and the other assistant coaches and the team, who might have some concerns that they are a little nervous to talk to Coach Potter about. Me and Coach Potter have built a better relationship and had growth since I started being captain.

JM: What is the difference between this year’s team and last year’s team?

JB: This year’s team has a lot of freshmen. … So, the freshmen and the other first years came in ready to compete. They helped us bridge that gap of not having as many seniors as we have had in the past. I’m really confident in what they can do and what we have been doing so far this season. There has been growth in the last three to four meets, so I can only imagine what competition season is going to be like.

JM: How are you personally feeling about your senior season?

JB: Personally, I’m excited. It is my last year, so I’m really excited to tackle all of the events that I do. I’m really excited just to be able to experience Liberty Leagues, since it is only our second year in the league and we’ve done exceptionally well this past year. I am excited to potentially see where I can go from Liberty Leagues, hopefully to All-Atlantics and then to Nationals. Our team is a post-season team — that is when we start getting our personal records.

JM: What are some goals you have set for yourself for the remainder of the winter, and then the spring, season?

JB: Personally, I have seen myself potentially making it to nationals for the long jump. That is one of my favorite events that I do, so I am pushing myself to get better in each meet.

JM: What are some goals for your team overall?

JB: We decided at the beginning of the year that we would like to get more people to nationals. In the past, we have had maybe a relay, or maybe just one or two people go. This year, we want to collectively bring a team to nationals, bring 10, 11, 12 people to nationals so we can get the Ithaca name out there. We are pretty much just a very small Division III school, so not too many people hear about us often. In the past, with people like Kat Pitman [’18], Taryn Cordani [’18] and Brandy Smith [’17], we have been getting our name out there. We want people to know that Ithaca’s track team is here to stay, and you don’t need to be a Division I school to be amazing, because we have been doing great so far.

JM: How would you describe your journey at Ithaca College with the track team?

JB: It has been amazing. It has definitely been different than my freshman year — different coaches, different seniors and different captains. Our culture has definitely changed a little bit, and you can just tell from the past years that things are getting better. Our first–years are starting to step up to the plate a lot more and are getting into it. They are not afraid to jump into anything. They’re not just saying that, ‘Because I’m a first year, I can’t go to nationals.’ We are starting to see a lot of underclassmen and upperclassmen step up, even more than in past years.

JM: If you could describe your senior season in one word, what would it be?