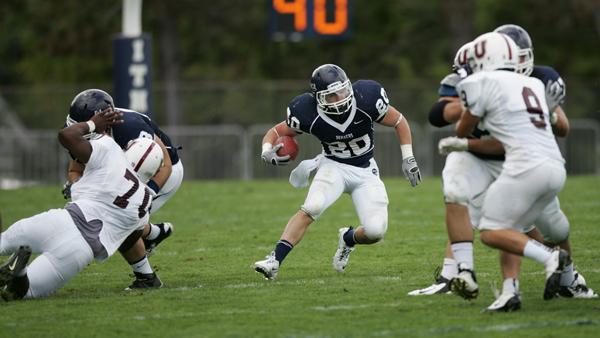 Two nicknames — “Horse Legs” and “Beast Mode” — may be more fitting for comic book characters, but they describe the football team’s two-pronged running attack of senior running backs Jarrett Naiden and Clay Ardoin. Together, these two seniors bring a blend of power and speed to the Bombers’ backfield that could cause headaches for opposing defensive coordinators all season long.

At 6 feet 2 inches tall and 216 pounds, Ardoin, known on the team as “Beast Mode,” is the more powerful runner of the pair. He relies on running straight up and using his speed to get to the outside. Naiden, aka “Horse Legs,” stands at 5 feet 8 inches, is 186 pounds and relies on his agility to make defenders miss inside the tackles. He started the last three games of last season and said he owes his improvement to offseason workouts held at his old high school in Easton, Pa. His offseason regimen included hour-long runs, agility drills and football-specific weight lifting.

The Blue and Gold unleashed double trouble on Moravian College at their 24-0 season opening win Sept. 1, where each member of the pair set career highs. Naiden rushed for 118 yards, while Ardoin rushed for 206.

Naiden said he and Ardoin like to wear defenses down with pounding runs until they break down late in the game.

“We like to do our own thing, but we definitely have a thunder and lightning deal going,” Naiden said.

The running backs’ outburst was as methodical as it was explosive. Each runner recorded their longest runs in the fourth quarter.

Ardoin’s 84-yard run served as the exclamation point to an emphatic performance.

The Bombers were on their own six-yard line late in the game when Ardoin received the handoff from junior quarterback Phil Neumann on a power play to the left. With sophomore right guard Andrew Benvenuto pulling to the left, Ardoin had a lead blocker and a safety to beat. After beating the safety, Ardoin sprinted 84 yards before being pushed out of bounds at the Greyhounds’ 10-yard line.

The run propelled Ardoin over the 200-yard mark, but despite that impressive total, the senior runner said he is refusing to let the dominant performance get to his head.

“It was one game,” Ardoin said. “If you make a good play you put it in the bank and move on. You don’t let it get to your head because if you do you’re setting yourself up for failure.”

Ardoin’s humility comes after he saw limited action last season because of a coach’s decision, despite being the team’s leading rusher in 2010. He said he needed another opportunity to play after last season.

“I’m always ready to play,” Ardoin said. “I’ve been here long enough, and I know the playbook and what’s going on with the team. I just needed my opportunity to get back on the field.

Naiden said he stuck with Ardoin through his struggles last season.

“I just told him to keep working hard and nothing is guaranteed here, so we just kept pushing each other as much as we could,” Naiden said. “We knew this was our senior year, and we wanted to do the best we could because we knew it would help the team become the best it could be.”

The senior duo found tougher sledding in the Bombers’ second game against Union College on Saturday. The two combined for just 49 rushing yards in the first half and a fumble by Ardoin set up Union’s first touchdown of the afternoon.

In the second half, however, the running backs found their rhythm. Ardoin ripped off two consecutive runs of more than 10 yards in the third quarter and the Bombers’ ground game opened up the passing game for junior quarterback Phil Neumann in the fourth quarter. The South Hill squad erased a 14-point deficit in the fourth quarter before eventually scoring a dramatic 27-24 overtime victory.

Naiden and Ardoin, who live just two houses apart from each other, have risen up together through the ranks since joining the team in their freshman years. Even through battles for the starting role, Naiden said the bond between he and his teammate has remained strong.

“Theres always a lot of competition at running back and we always stuck together,” Naiden said. “We work well with each other and help each other out if we mess up or give each other feedback.”

They also work with graduate assistant running back coach Art Hoomiratana, who is in his first season with the Bombers. Hoomiratana said Naiden and Ardoin are comfortable with splitting the bulk of the carries from the backfield.

“I don’t emphasize who starts, but we all know that they’re both going to play,” Hoomiratana said. “They have to be ready whenever their number’s called, they’re great at working together, they’re great friends and there’s no ego.”

Ardoin said the positive relationship he has with Naiden enables them to better communicate with the younger running backs. This communication leads to an atmosphere that Ardoin said will lead the Blue and Gold to a successful season.

“It comes down to trust,” Ardoin said. “You have to be able to trust the guy next to you play in and play out. You have to take care of your job, and I think the team really gets it this year.”