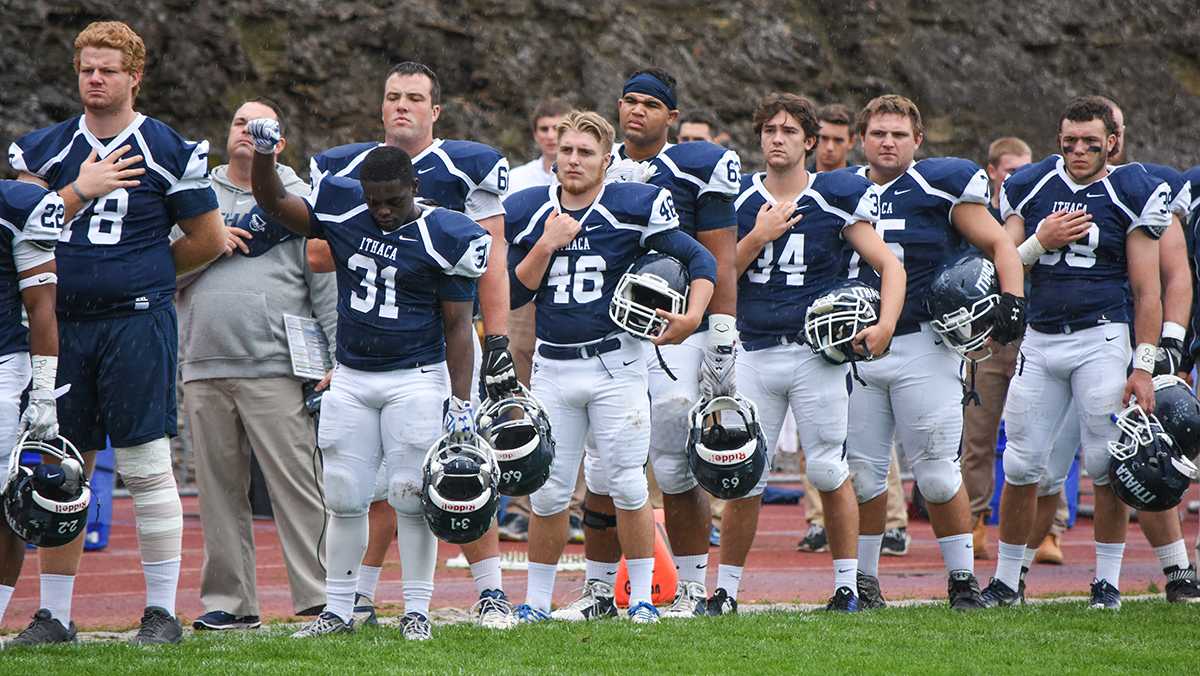 Per tradition, “The Star-Spangled Banner” was played before the Ithaca College football team’s Oct. 1 home game against Utica College. While those in the crowd rose to their feet and listened to the national anthem, senior running back Shawahl Abdur-Rahman, standing in the front of the Bombers’ sideline near the flagpole, held a fist in the air.

Abdur-Rahman’s gesture paid homage to San Francisco 49er quarterback Colin Kaepernick’s ongoing protest against standing for the national anthem and flag. Kaepernick said the anthem and the flag are symbols of persecution of people of color in the United States.

Staff Writer Andrew Sullivan spoke with Abdur-Rahman about the connotations of his actions and what he hopes to achieve from his protest.

Andrew Sullivan: Why did you decide to hold up just your fist instead of just kneeling or kneeling and holding up your fist?

Shawahl Abdur-Rahman: Each year we pick a saying for the team. Then this year was “Rise as one.” … I decided to stand and put up my fist because you do have to rise as one. I didn’t want to single myself out from the team — still wanted to be a part of the team while bringing up this issue. I decided to stand side-by-side with my brothers on the team while I still brought up an issue that I felt personally for me, being a black player and a black person in general.

AS: What was it like in that moment, holding your fist in the air during the national anthem?

SAR: Right before doing it, you are kind of nervous. You don’t know how everyone was going to take it. I didn’t tell my coaches about it. You just don’t really know — you don’t really know how anyone is going to react to it. Plus, we had the past [players] at the game. We always have them at our second home game. … After it was done, you feel pretty good, like you’ve been a part of something.

AS: Were you worried about any kind of backlash from anyone?

SAR: No. At that point, you just do it and stand fast in what you believe in. So I did it. I mean I felt like raising my fist up in protest was the best way to handle it. I know I have a lot of friends on the team who have veteran brothers, uncles and fathers. So I have a lot of respect for veterans. I felt like this way was the best way to do it. I’m still standing, showing appreciation for those veterans that fight for this country all the time and bringing awareness to the topic that needs to be spoken about.

AS: What was the statement you were trying to make that day?

SAR: I agree with everything that Kaepernick has done up to this point — the reason why he is taking a knee, the reason for him starting his protesting. Football and America go hand-in-hand; we love football. Football is a time where I don’t have to think about any issues outside of America. … I still feel like, because this is such a big thing in America, the topic should be brought up because it has so much influence [on society], especially as athletes. … Just show my support to Kaepernick and his protests and let him know that it has reached a little town like Ithaca.

AS: As you continue this protest for every other game this season, what do you hope to accomplish from this.

SAR: I just want the conversation to be had. I want to walk around the locker room and be able to talk about football and be able to talk about this. I’m not necessarily looking for some dramatic change to happen at Ithaca College. … I feel like this campus does a really good job of being aware, but I just want people to help other people that aren’t aware on campus be aware of this.

AS: Do you think it is beneficial for the college to hold formal gatherings where the students can meet and discuss issues similar to this one?

SAR: As Ithaca College students, we do a great job of talking about these issues, but those shouldn’t be the only places where those issues are talked about. Issues should be talked about informally and in a common place. Why does the conversation only need to be spoken about in formal settings? Because then that means we talk about it that one time. … It’s going to be talked about for another week, and that it’s going to be done. People are always thinking, “How can we change this?” … Be comfortable with talking about it. Just raise awareness, tell the issue, tell the topic.