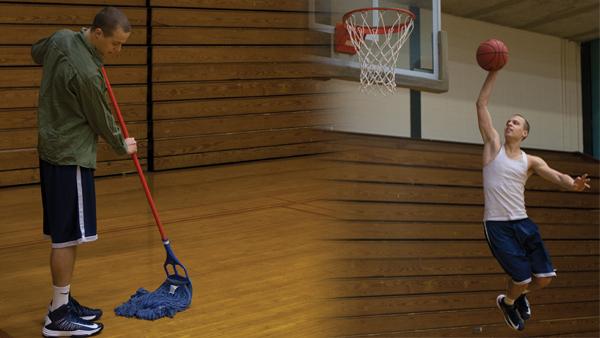 Photos by Durst Breneiser. Design by Shawn Steiner.
Senior guard Eli Maravich is returning to the men's basketball team after a two-year absence that included jobs in the basketball offense and as a janitor.
By Christian Araos — Staff Writer
Published: November 29, 2012

Basketball runs through senior guard Eli Maravich’s veins, but the last name means more than just a reputation for Maravich — it means family, and it’s the very reason he is returning to basketball after a two-year absence.

Maravich comes from a family that has produced two basketball legends, Petar “Press” Maravich, who won more than 200 games as a college basketball coach, and “Pistol” Pete Maravich, a Hall of Fame point guard who is described as “perhaps the greatest creative offensive talent in history” on his plaque in Springfield, Mass.

Eli Maravich said his legendary name got him attention on the court from a young age.

“It made things a little different for me,” he said. “I would be playing [Amateur Athletic Union] in sixth grade and kids’ dads would come up to me and say ‘I used to watch your relative all the time.’ It made it a little extra cool.”

Maravich played basketball throughout high school, winning three high school sectional championships in Western Pennsylvania and earning all-district honors. His success in high school garnered attention from coaches on South Hill, and Maravich was recruited to play for the Bombers.

Once at Ithaca College, Maravich played in every game his freshman year, helping the Bombers to an ECAC Upstate New York Championship averaging 22 minutes a game, sporting a blue-collar style of play reflective of the steel town he came from.

After spending most of his life on the hardwood and a successful freshman season, Maravich quit the varsity basketball team — much to the surprise of his teammates.

“Originally he said he was planning on transferring schools,” senior forward and Maravich’s roommate Andrei Oztemal said. “I definitely went at length at convincing him to come back, but he’s a unique guy. He likes to try other things, so I think he got that out of his system.”

Despite the best efforts of his teammates to bring him back, Maravich held strong to his decision to leave the team. The demands of high-level basketball in high school and college had taken its toll on him. He said his grades were suffering, his free time was gone and his wallet was empty.

“I was missing out on my free time,” Maravich said. “It was more than what I realized what I was getting into. I just needed a break from it.”

However, though Maravich hung up his uniform, he was far from gone from the game, because he continued to remain close with his teammates and coaches while working in the team’s office.

“Everything was good; I didn’t have a falling out by any means,” Maravich said. “I love the coaches, and I got along with the team really well, and they all knew that it wasn’t against them.”

Head Coach Jim Mullins said he never attempted to re-recruit Eli when he made his decision to leave the team.

“I didn’t try to talk him out of it,” Mullins said. “I think he was pretty committed into trying to do some other things.”

During his junior year, Maravich took a job working as a janitor at the South Hill Business Campus just a year after working in the basketball offices. Maravich worked eight hours a week wiring lights in the ceiling, vacuuming floors and washing bathrooms to make ends meet.

Back in Western Pennsylvania, Maravich’s 86-year-old grandfather was upset that he was no longer playing basketball. His grandfather had watched Eli play throughout high school and grew up in the same home as “Press” and wanted to see his grandson play one more time. After speaking with his grandfather, Maravich said he finally realized it was time to return to the hardwood.

“He’s really inspired me,” Maravich said. “He was kind of the straw that broke the camel’s back. I talked to him about coming back, and he’d be at every one of my high school games, and he loved watching me play, and this is my last shot at it, and I’m gonna do it for myself but also keep him in mind.”

Maravich said he was also beginning to regret being off the team.

The first person Maravich told after making his decision was his roommate. Oztemel, who had been trying to convince his friend to return for two years, said he was overjoyed.

“I was excited, and I told him over the phone, ‘Finally, a voice of reason has spoken to you!’” Oztemel said.

Maravich experienced very little rust rejoining the team and quickly picked up where he left off. In their season opener against SUNY-Potsdam, he recorded four steals, which helped the Blue and Gold pull away in the second half. In their loss to Clarkson the next day, Maravich hit four 3’s. His solid performances led Mullins to say that Maravich has been the team’s most valuable player so far.

“He’s happy to be out there at all times,” senior guard Sean Rossi said. “A lot of times we’re feeling down when we’re not playing well, and he always keep a smile on and keeps his energy, and it brings us closer together as a team,”

For Maravich, the energy and effort he brings to the court runs in his blood. The same blood that he said is providing his motivation throughout the season.

“I’m going to be thinking about my grandpa a lot this season, because this means a lot for me to do for him,” Maravich said. “I just hope I can make him proud.”