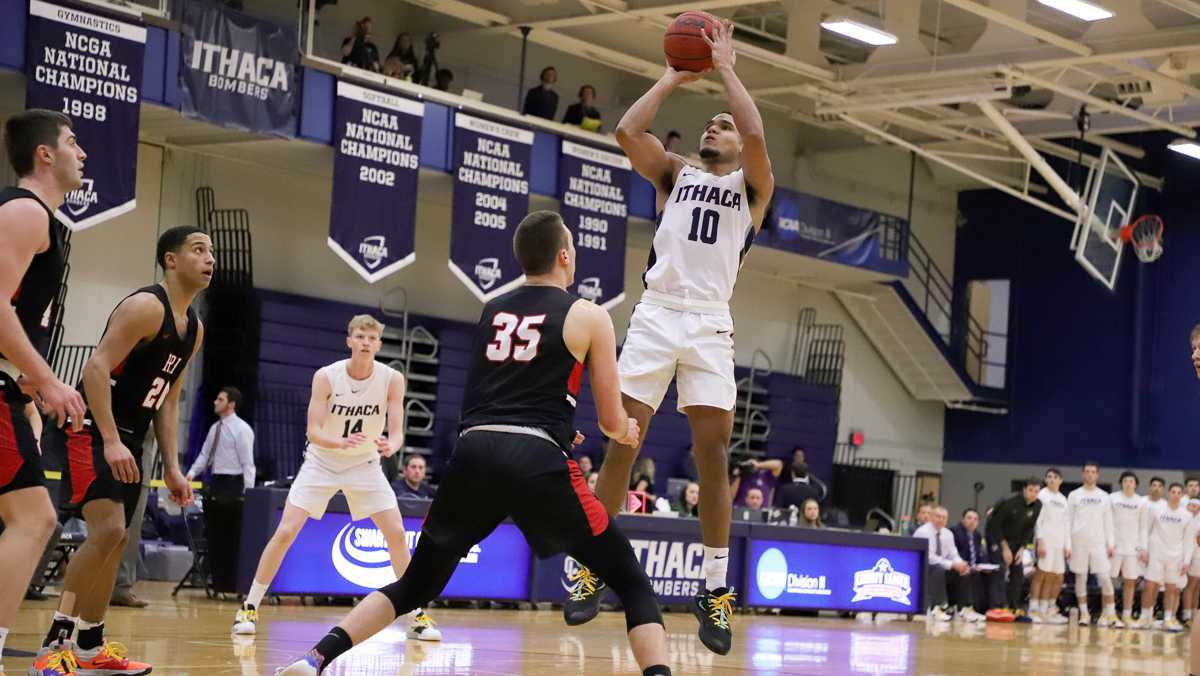 Alderete said that when he was just 67 points away from the goal, assistant coach Sean Burton notified him. Alderete said he kept this in the back of his mind, but he focused more on just playing basketball.

It did not take long for Alderete to hit 1,000 points against Union. He entered the contest three points shy of the milestone, and he hit a three-pointer just 34 seconds into the game. He said his nerves were not bad before the game because he went through the pregame routine he’s had since freshman year: He put on headphones; listened to his favorite artist, Lil Baby; and visualized what he is going to do on the court to help his team.

Alderete said this milestone has been a long time coming. He said that joining the 1,000-point club was a matter of when, not if.

“I knew I was going to join the 1,000-point club at some point in my career before I even got to Ithaca College,” Alderete said. “In high school, I got to 1,000 points, so coming into this program, I knew that I was going to get it.”

Alderete is currently averaging 16.2 points per game this season and has been a reliable source of offense for the Bombers since becoming a starter last season.

Alderete needed to grow as a basketball player and wait for an opportunity before getting his chance to consistently help the team on the court. He played behind guard Marc Chasin ’18, the fourth–highest scorer in program history, until his junior year.

Alderete said the summer between his sophomore and junior seasons was significant for his development. The Bombers lost four seniors, including Chasin, and the team needed someone to step up.

“I would say that summer going into my junior year I knew I had to step up for our team’s success,” Alderete said. “Honestly, I was very scared of not starting and not being able to fill that role. That drove me through the summer.”

Alderete averaged approximately 10 more points per game, increased his shooting percentages from 38.2% to 46.9% from the field and 22.5% to 42.5% from the three-point range, and he started all but one game in his junior season.

His progress did not surprise anyone who knew how hard Alderete worked on his craft. Head coach Jim Mullins said that he could see the potential in Alderete during his freshman year.

“His freshman year, we finished playing a game, we went down to the locker room and talked, and guys are starting to head out to their dorms or supper,” Mullins said. “I walk in, and Sebastian was doing situps in the locker room. I go, ‘What, you weren’t tired enough from playing?’ Obviously, he’s a very physical kid, and his shot has evolved.”

Sophomore guard Skylar Sinon said whether it was postgame workouts or getting extra shots up whenever he could, Alderete showed the coaches he was a dependable scorer.

“He’s a competitor. He wants to win,” Sinon said. “Just knowing that he has the same mindset to go out there and do whatever he can to win is comforting for our team. If we need a bucket, he’ll be fine with taking the ball and getting one for us.”

Mullins said that when Alderete puts his mind to it, the coaching staff is confident he can accomplish anything on the court. Sinon said Alderete’s athleticism allows him to outmuscle other guards, and his quickness can get him past most forwards.

As his final season as a Bomber winds down, Alderete said he feels content with what he has done individually. He said he has yet to sit back and reflect on his 1,000–points accomplishment, but he feels honored to be on an exclusive list in program history. In the midst of the best season the Bombers have had since joining the team, Alderete said that he wants to accomplish more before he ends his career.

“I still have a lot to prove in these last couple of months,” Alderete said.