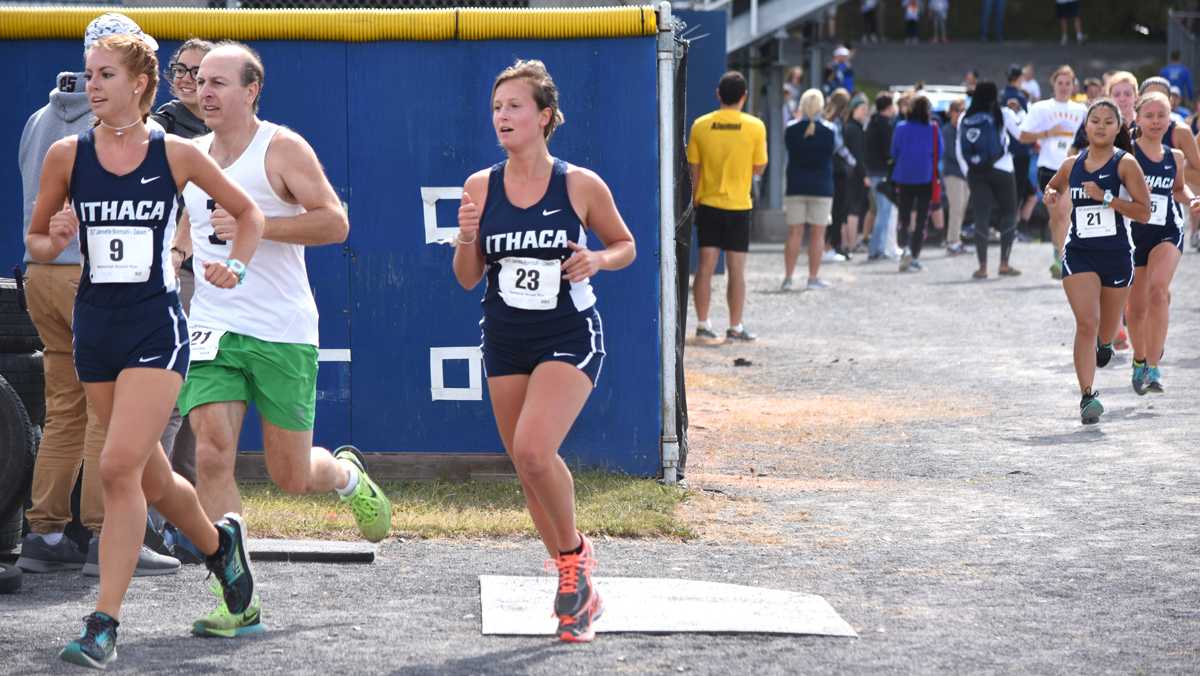 One of senior runner Amanda StClair’s main goals for this season is to make sure her teammates look forward to coming to cross-country practice.

Now in her eighth year of running cross-country, StClair is one of the two captains for the Ithaca College women’s cross-country team this year, along with fellow senior Hailey Nase. As captain, StClair said, she is trying to focus on providing the team with an enjoyable experience while also leading the team to its sixth nationals appearance in seven years.

“We have a fun culture this year, and we are doing so well,” StClair said. “I know those are related — you won’t do well unless you’re having fun and you love what you’re doing, so I want to make sure when we get to nationals that the team has so much fun the whole time.”

StClair said she tries to make sure the team does a lot of activities together besides running cross-country, like eating dinner together every night, going pumpkin picking and even going grocery shopping together. Junior runner Sarah Rudge said StClair emphasizes a fun culture.

“Amanda wants everyone to feel safe and comfortable at practice,” Rudge said. “With her, cross-country feels like an adventure every single day.”

StClair, an integrated marketing communications major, hopes to be a creative director for an advertising agency after she graduates. Because she will always need to be creative with her career, she practices being creative with the sport and her teammates, she said.

“Cross-country people are the weirdest people alive,” StClair said. “I think trying to out-weird other people is really hard, but for me, it isn’t as bad because I’m the weirdest. Trying to come up with different ways of being weird and making people laugh is a really creative process, and I have to really think things out.”

“I was calling her as a recruit, and I had one of the most positive, exciting conversations with her just in that first conversation,” Dinan said. “She was baking cookies, and she had so much energy and I thought, ‘Oh my god, you are going to fit in so well into this team,’ and that was my first experience with her, and that hasn’t changed.”

StClair said she first became interested in the sport through her family but was not able to run competitively until high school.

At the end of last season, StClair said, she had beaten her personal best time by three minutes by the end of the season. She started her junior season at the Purple Valley Invite where she ran a time of 25:53.6. By the time she crossed the finish line at nationals, her time was 22:53.8.

At the end of her freshman season, StClair had only improved her racing time in the 6,000-meter race by 45 seconds. At the end of her sophomore year, she bested her time by one minute and one second. Improving by a time of three minutes her junior year, she said, was unexpected.

StClair said one of the things she loves most about cross-country at the college is the ability to improve every season, which is something that she said, in her experience, is uncommon at the high–school level.

“A lot of times, what happened in high school, is people would peak their sophomore year and then decline junior and senior year,” StClair said. “When I was here, I came in and saw that not only were the sophomores good, but juniors were better, and seniors were better than them. I talked to Erin [Dinan], and she said that was her training — she wanted to build us up over four years.”

“I get really sentimental about running because I love it so much,” StClair said. “I love this team so much, and I love Erin so much. Running teaches you how to be confident in yourself. You shouldn’t base your confidence on it, but it should lead you to be confident as a person because running shapes your entire life. It creates a really clear-minded individual.”