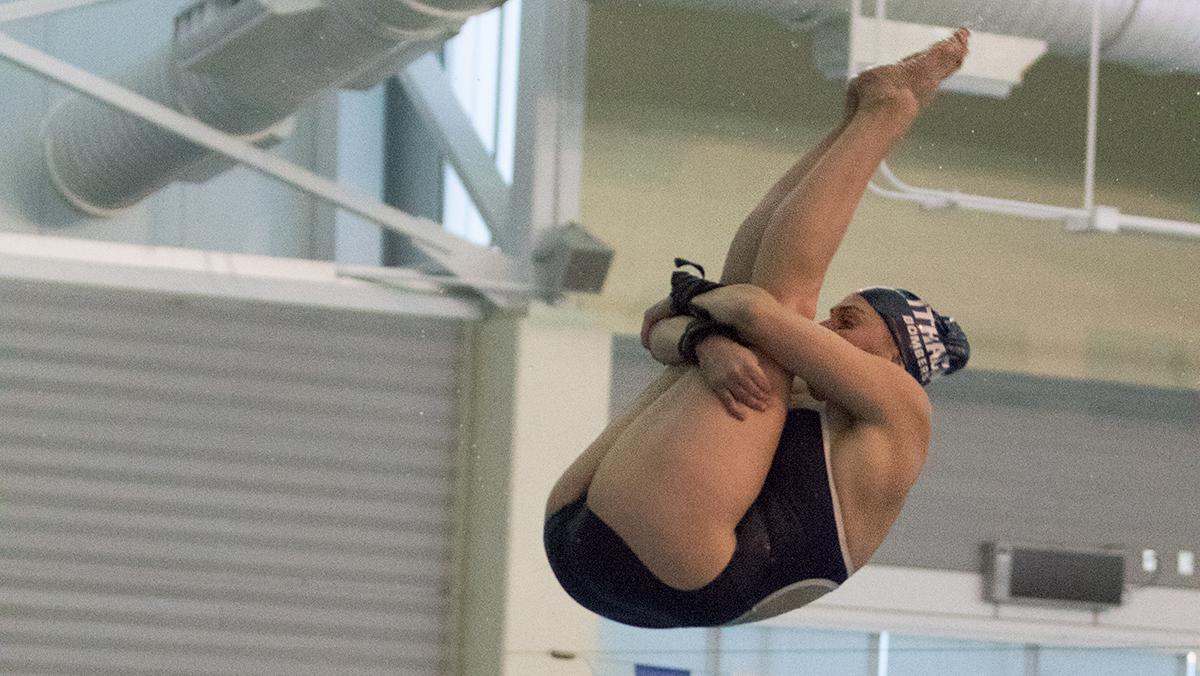 FERNANDO FERRAZ/THE ITHACAN
Senior Nickie Griesemer practices Nov. 7 in the Athletics and Events Center. She qualified for the NCAA Championships in the 1-meter and 3-meter diving events in the first meet of the year.
By Lauren Murray — Assistant Sports Editor
Published: November 11, 2016

Last fall, senior Nickie Griesemer spent her time roaming the streets of Barcelona, Spain. This year, the two-time NCAA national qualifier is back on the diving boards for the Bombers for her third season.

Griesemer joined the women’s swimming and diving team as a freshman and was named the Empire 8 Diver of the Year that year. Griesemer also made trips to the NCAA Championship during her freshman and sophomore seasons, earning All-American honors both years.

After studying abroad last year in Barcelona, Griesemer decided it was not worth it to use her third year of NCAA eligibility the following semester. As a senior in her third year in the NCAA, she will be able to use her fourth and final year as a graduate student.

Griesemer said studying abroad was always a plan of hers and that she was lucky enough to extend her diving career.

“It had always been my dream to go abroad,” Griesemer said. “I always wanted to go to a different country and visit as many places as I could.”

Diving coach Chris Griffin said not having Griesemer on the team was a big loss but that the team was able to recover without her presence.

“She was a huge contributor to our team,” Griffin said. “She was one of our top divers. We lost an excellent athlete, but fortunately for the state of where this team is, we were able to make up the ground with the talent and depth that we already have.”

After a season away from the water and the team, Griesemer said the adjustment was not easy. She said it was difficult to revert back to her old schedule.

“It was hard,” she said. “I was definitely rusty, and I am still rusty. I am still trying to get everything back to where it was before, and it was difficult. It was definitely mentally and physically challenging.”

Despite the frustration, her first meet back was successful, as she qualified for the NCAA Championships in the 1-meter and 3-meter diving events. In her second meet, she won both diving events by about 12 and 23 points, respectively.

Griffin said Griesemer’s struggles throughout preseason did not outweigh her chances of qualifying.

“You spend a year away from a sport, getting back into it takes some time,” he said. “Obviously, based on the results of the first meet, though, rust on an All-American is still an All-American.”

Junior diver Alyssa Wishart said she was excited to see Griesemer back on the roster.

“She’s always positive and encouraging, which keeps practice fun,” she said. “She is such a hard worker with such a strong work ethic that not only allows her to improve but pushes everyone else to be the best they can be.”

Despite the break from the pool, Griesemer said her goals have remained the same since joining the team.

“I would like to be at the same level I was before I went abroad,” she said. “The goal is to make nationals, and I would love to place better than I did two years ago, so we will see how far I make it.”

Swimming and diving defeats Cortland in third meet of year