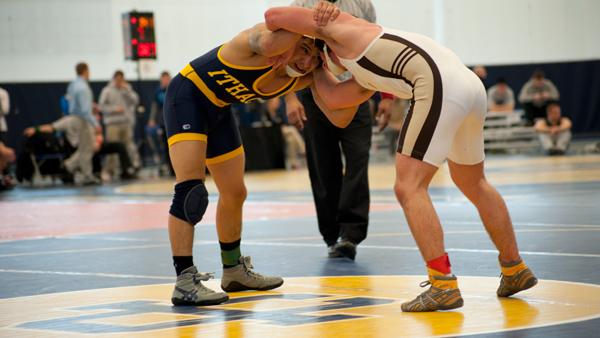 Senior Ricardo Gomez knew the final match of this season and his career, the Division III national championship March 16, would come down to one mistake. It was his championship to lose. However, when he stepped onto the mats against freshman Jimmy Gotto of Coe College, he made no mistakes. Gomez rode a 4-2 decision to victory.

With the win, Gomez became the 11th wrestler in program history to win an individual national championship and became the first Bomber to win in the 125-pound weight class.

This meet was not the first time Gomez stood on the top of the podium after competition. However, it was the last time that he and his teammate senior Jules Doliscar would ever stand on the championship pedestals.

On his path through the national championship tournament, Gomez squared off with Wartburg senior Gilberto Camacho in a rematch from Jan. 12 at the Division III National Duals. Gomez got the best of Camacho, earning a 3-2 decision. The rematch had a similar result with Gomez winning an overtime bout with a 2-1 decision.

In the championship match, Gomez was a heavy favorite facing unranked Gotto. The match came to a finish with a 4-2 decision in favor of Gomez, giving him the national championship and a final record of 29–2 on the year.

After besting his competition in the 125-pound weight class, Gomez said he was speechless and that it took him a while to finally realize that he was a national champion.

“There is no better way I could’ve asked to finish my career,” he said. “I knew that this season was my last chance to get to the top, and I never forgot that I just had to always make the most of every opportunity I had to compete.”

Gomez was quick to shift the credit to his coaches and supporters, who he said allowed him to make the biggest transition from an unranked wrestler to the top of his weight class.

“When I transferred here, I was stubborn and didn’t listen to my coaches and thought that their moves weren’t going to work,” he said. “When I didn’t make it to the National Championships last year, I had only myself to blame, so this year I listened, and they made me a national champion.”

Before the championship match Gomez said he took a moment to send a text message to his family and friends thanking them for all the years of support. He even wore a green-beaded medallion with the letter ‘B’ in the center as a reminder of his hometown and other motivating factors.

“The ‘B’ stands for my hometown of Brentwood [N.Y.] and for belief, and before every match it would remind me of my belief in what I have done and my goal, which was to be the National Champion,” he said.

Throughout the season, Gomez sipped from a water bottle with the words “National Champion” written on it and, before bed, the last thing he would see was the same words written on his ceiling. Both served as a motivation and a reminder of the goal he ultimately achieved.

Led by All-American senior Jules Doliscar and sophomore Alex Gomez, who finished 2nd at 174 pounds and 6th at 133 pounds respectively, the Bombers placed the highest of every team in the three eastern and the western regionals.

Head Coach Marty Nichols said he was satisfied with the way the season finished because of the gradual improvement he saw from his team and athletes, especially in the postseason.

As the Bombers prepared for the National Championships during the week of spring break, many team members not competing stayed behind to train. Freshman Jake Buczewski trained with Doliscar during that week to finish out his season. Doliscar said it was a great sign from a younger teammate, and his commitment is a way of leading by example.