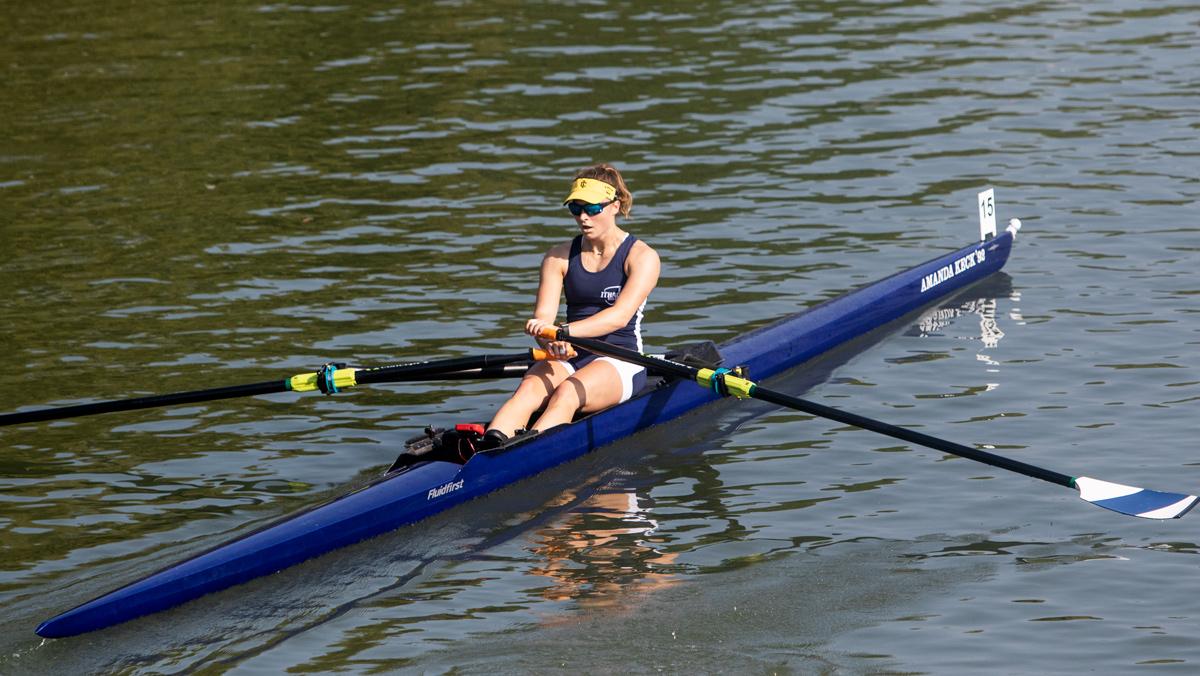 Lexi Danielson/THE ITHACAN
Senior Liza Caldicott competes Sept. 22 at the Cayuga Sculling Sprints. Caldicott finished first in the lightweight 1x and fourth among all singles races, earning her a medal in the event with a time of 17:32.4.
By Shehanee Fernando — Staff Writer
Published: October 31, 2019

Even though senior Liza Caldicott had never rowed before college, she found a home on the Ithaca College sculling team.

Caldicott grew up playing soccer, but she said she did not originally plan to play a sport in college. During her freshman year, she said she realized she had a lot of free time, but it was too late for her to try out for the varsity soccer team, which is why she turned to crew. She said that she knew nothing about rowing. She began competing during the spring crew season during her freshman year and joined the sculling team as a junior.

Last year, Caldicott earned the title of 2018–19 Cayuga Sculling Sprints Lightweight 1x Champion. During the 2017–18 season, Caldicott was a member of the boat that earned a fourth-place finish at the 2018 NCAA championship. She was the runner-up at the Liberty League Championship in the Junior Varsity Eight and also placed third at the New York State championships.

Staff writer Shehanee Fernando sat down with Caldicott to discuss her leadership and competitiveness on the sculling team.

Shehanee Fernando: Why did you join the crew team?

Liza Caldicott: I came here not anticipating to play a sport. I focused on academics, and, after my first semester, I was like, ‘Oh no, I have time for more,’ and I wanted to do more. Having played soccer a lot, I thought that would be a good opportunity, but that had already passed from the fall. But for rowing, I knew that they do year-round recruiting. I saw that as my next opportunity to play. I knew one person through a friend of a friend that was on the rowing team, so that was my in.

SF: What do you think of your growth through the years?

LC: There is a curve, especially for someone who is new to rowing. You have this new learning period when you are a freshman, and once you figure out what’re doing, there is all this growth during your sophomore year. Personally, junior year was definitely a challenge because I had another opportunity to show my speed and what I learned from the year before. It was more of a mental challenge. That was definitely present last year because there was a lot of success that came out of it, but there is definitely more of a necessity for mental toughness.

SF: What skills have you learned from sculling last year?

LC: Definitely mental toughness. I feel like that’s something more than anything else. That comes from advocating for yourself and really embodying team culture and your ability to be tough and your ability to persevere through challenges. What’s unique about rowing is that you’re competing against your teammates to get into the boats. But once you are in the boat, you are very much in a team-orientated sport. And you are 100% pulling for each other, and no one is valued more or less than the next person. So I feel like a lot of us definitely learned how to put other people before ourselves, and that was a big part of our team culture. Also, there are skills in the water that we learned. Towards the end of the season, we talked a lot about how to better row our strokes and how we raid our pieces and how we are going to compete at nationals. We have the time to refine our skills with the big chunk of time we have before nationals in May.

SF: How did it feel to earn the lightweight title?

LC: It was really fun. It was a race where you do two races in a day with different distances. So you have to approach each of them with a different plan, which was interesting. I had more than one opportunity to show my speed, and it’s not one head-to-head race. It was more than fun to compete in a lightweight category because that’s more of a category that was specific for my size and closer to my speed. It was interesting to be paired up with someone I’ll be similar with. Everyone on the team was rowing but in different boats and in different lineups. We try to make the lineups for that race the most successful as they can be.

SF: How do you feel like this season is going so far?

LC: It is going really well. Our sculling season is almost over. We have two more weeks left of it. But it was really fun. I think the best part of the sculling season is there is always new people to the sculling team every year. You can see everyone having this huge learning curve just like when you first learn to row, first learn to scull. Every time you are in a boat, you are learning something. You learn how to be faster, and then from there you can learn how to put more pressure on and be quicker in the boat and have better techniques in the boat. It’s amazing to see that in other people but also in yourself. We all have the ability to learn and keep learning. I am proud of our team in that sense. We have all been successful in our races so far.

SF: What are you contributing to the team?

LC: I feel like there is an obvious contribution of being a fast rower and being someone that people want to be in a boat with. I hope that I have brought an air of confidence and maturity to our team this year since it’s my second year on the sculling team. It gives me pride that someone would ask me a question about where to go or what should happen or what I think the protocol for something is. It’s nice to have that confidence that you know what’s going on and how things are run.