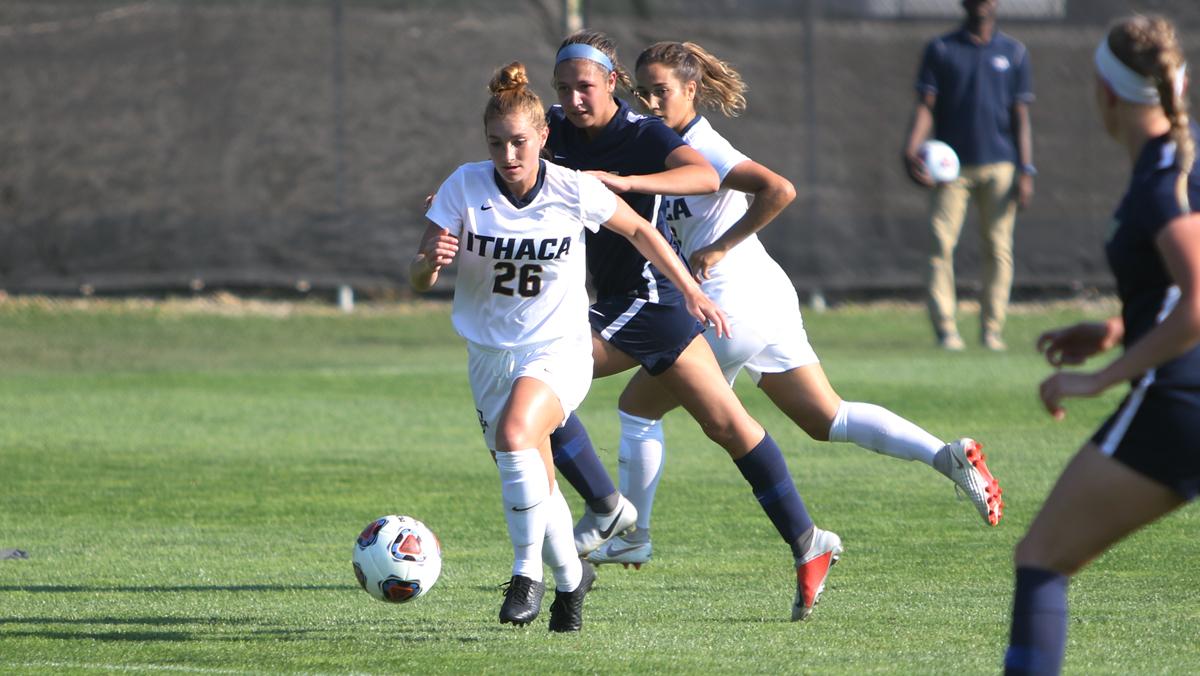 During their home opener against Wilkes University on Sept. 5, senior midfielder Shoshana Bedrosian received a pass from junior forward Ally Christman and drilled home her fifth goal of the season for the Ithaca College women’s soccer team.

Bedrosian has now scored every goal for the Blue and Gold in every game she has competed in during the 2018 season. The South Hill squad is currently 4–0 this season with critical wins against Centenary University, Westfield State University and Wilkes University. Bedrosian did not compete in the team’s Sept. 8 game against Elmira, which it won 9–0.

Bedrosian has not always been the clear star for the Bombers. During her freshman and sophomore years, she tallied only six total goals. She earned her status as a consistent starter in her junior year, but her breakthrough in performance truly began in the middle of the 2017 season. Bedrosian notched four goals against Wells College on Sept. 16, tying the school record for the most goals in a single game.

This year, she has upped her momentum even more, netting three goals in the season opener for a 3–1 win over Centenary on Aug. 31. As the week continued, she added one apiece in two shutouts versus Westfield on Sept. 1 and Wilkes on Sept. 5.

Bedrosian attributes manyl of her accomplishments over her college career to her teammates and the college’s coaching staff, naming them as the greatest factor in her growth as an athlete.

“Everybody plays for one another. We play as a whole, and that’s something that I really value,” she said. “I was excited, but I wouldn’t be able to be successful on the field if it wasn’t for my team setting me up. It’s not just my own individual plays that make it up — it’s everyone around me too.”

Bedrosian’s real transformation has been a physical one. Measuring only 5’3”, Bedrosian is small compared to the average collegiate soccer player. Fellow senior forward Sarah Pirnie said she laughs now thinking back to how Bedrosian was four years ago.

“Freshman year, she was physically tiny, and she was just inexperienced,” Pirnie said. “She’s gotten so much more dominant and sure of herself, and that’s been really cool to see.”

Building up her strength and using her size to her advantage have become critical in her development as a star for the Bombers.

“I’m a lot stronger now than I was,” Bedrosian said. “I was very small coming into college, and now I’ve gained lots of muscle and strength. My biggest asset physically is my speed. I’ve learned how to use it over the course of being at Ithaca, and it’s something I always use when I’m trying to attack the goal.”

Though she gives much of the credit to the people around her, Bedrosian said she takes some ownership of her success due to her work ethic.

“I value my offseason and preseason training a lot,” she said. “I never want to come in feeling tentative. I always want to come in at my best with my fitness and my ball skills.”

Bedrosian puts a lot of time into her offseason training. She puts in time every day, training through a variety of mediums. She includes a mix of on-ball work to improve her technical skills, off-ball agility training, cardio workouts and weight lifting in order to achieve well-rounded fitness.

Bedrosian said she takes a great deal of pride in continuing the legacy of the women’s soccer program.

“I’ve been so lucky to be able to play with such top athletes at Ithaca,” she said. “I’ve been able to watch and get inspired by people who are legends here. Our assistant coach, Ellen, went to the Final 4 [of the NCAA Tournament], and she always reminds us of our history. We’re built on this foundation of incredible success and hard work, and I want to keep that going.”

She also emphasizes the importance she places on continuing to learn more about the sport, even though she has been playing since she was only 4 years old.

“With a couple years under my belt, I know what to expect with the competition, but I’m still learning every day,” Bedrosian said. “I haven’t been a starter my entire career, and I’m still fighting for spots every single day. I can’t be complacent.”

Head coach Mindy Quigg said she believes Bedrosian’s willingness to learn and grow is what has allowed her to develop into the leading scorer she is today.

“She fully committed to the lifestyle of the athlete in terms of training hard and challenging herself mentally,” said Quigg. “It’s made her a better player and leader and someone that we and her teammates can count on both on and off the field.”

Above all, the senior’s all-or-nothing mentality towards her final year competing is driving her towards big things in the rest of the season to come.

“I’ve been doing this for 17 years and this is my last time ever playing,” Bedrosian said. “It makes me emotional that this is my closing — it’s like the grand finale. I’m just so happy that I’ve been able to be at Ithaca for my final years, and I’m lucky to be able to play every single day.”