Senior swimmer dives into new position for the Blue and Gold 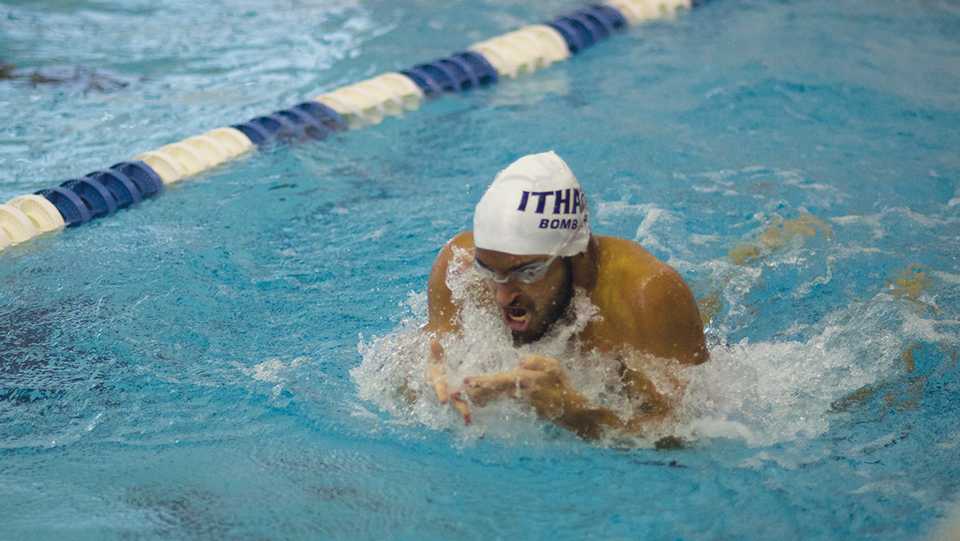 At swimming and diving meets, senior Jon Yoskin is seen running back and forth between the diving board and the starting block, competing in both the breaststroke and the 1-meter diving events.

Out of high school, Yoskin was recruited as a swimmer, but in his senior year, he’s taken on a new role for the South Hill squad. Most who are recruited focus on swimming or diving, and it is extremely rare for someone to pursue both in college.

Men’s head coach Kevin Markwardt said Yoskin serves as inspiration to both teammates and coaches, showing everyone that it’s possible to achieve their goals as long as they are patient and willing to commit.

“We’ve never had a person both swim and dive in my 35 years of coaching here,” Markwardt said. “When the guys see what he’s doing, there’s a certain amount of respect that comes from him willing to take on more of a challenge in order to score more points for us.”

Before Yoskin decided to dive this season, there was only one diver, meaning the Bombers would miss out on picking up the maximum amount number of points from the diving events. Yoskin said competing in both swimming and diving is what’s best for the team in his final year because he is able to help the team score points from both the starting block and the diving board.

“When I dive, it lets me contribute more to the team,” Yoskin said. “It’s another facet that I’ve added to show the guys that if they want to be on this team, they have to contribute every way possible.”

When Yoskin was 8 years old, he began swimming and diving for the Lawrenceville Swimming Association, but after the diving team folded that same year, he choose to focus on swimming. As a freshman, he considered pursuing both but decided to focus on just swimming.

The Lawrenceville, New Jersey, native swam individually as well as in the medley relays during his freshman and sophomore seasons. In the fall semester of his junior year, Yoskin, an art major, went abroad and did not compete.

At the beginning of this year, Chris Griffin, assistant aquatics coordinator and diving coach, noticed Yoskin casually diving with freshman Scott Hillen and observed that Yoskin had raw talent and potential. After a conversation with Markwardt, Griffin approached Yoskin and asked him if he’d like to start diving in meets.

Yoskin said he has dived before, so pursuing it in meets would be something he’d enjoy.

“When the coaches and I decided to move forward with this, I already had a basic lineup of dives.” Yoskin said. “I dove in the first meet and didn’t do great, but I had fun and was still able to score us some points.”

In that first tri-meet against SUNY Fredonia College and SUNY Brockport, Yoskin came in eighth place in the 1-meter event with a score of 154.35 but was not prepared to dive in the 3-meter event.

“He always likes to do something different,” Dodero said. “It didn’t come as a surprise to me that he wanted to dive as well as swim. Diving just came naturally to him. I couldn’t imagine the physical and mental strength it takes to do both.”

Yoskin said he spends the first 45 minutes of practice on the diving board, sharpening both his physical and mental skills. He then jumps in the pool and swims for the remaining hour and 15 minutes. While he’s not getting as much of a workout as the other swimmers, Markwardt said Yoskin still gets the most out of his limited workout.

“When he comes to swim, he’s laser focused for that short period,” Markwardt said. “It seems crazy to have a senior start diving, but Jon has such powerful legs it’s easy to see why it’s working.”

Yoskin said he will always consider himself a swimmer, but diving is now close to his heart as well.

“Anyone who has the basic talent should just go for it,” Yoskin said. “By no means am I the best, but I’m going to end my last year on a positive note and say that I did everything I could to contribute the most, and that makes me feel good.”