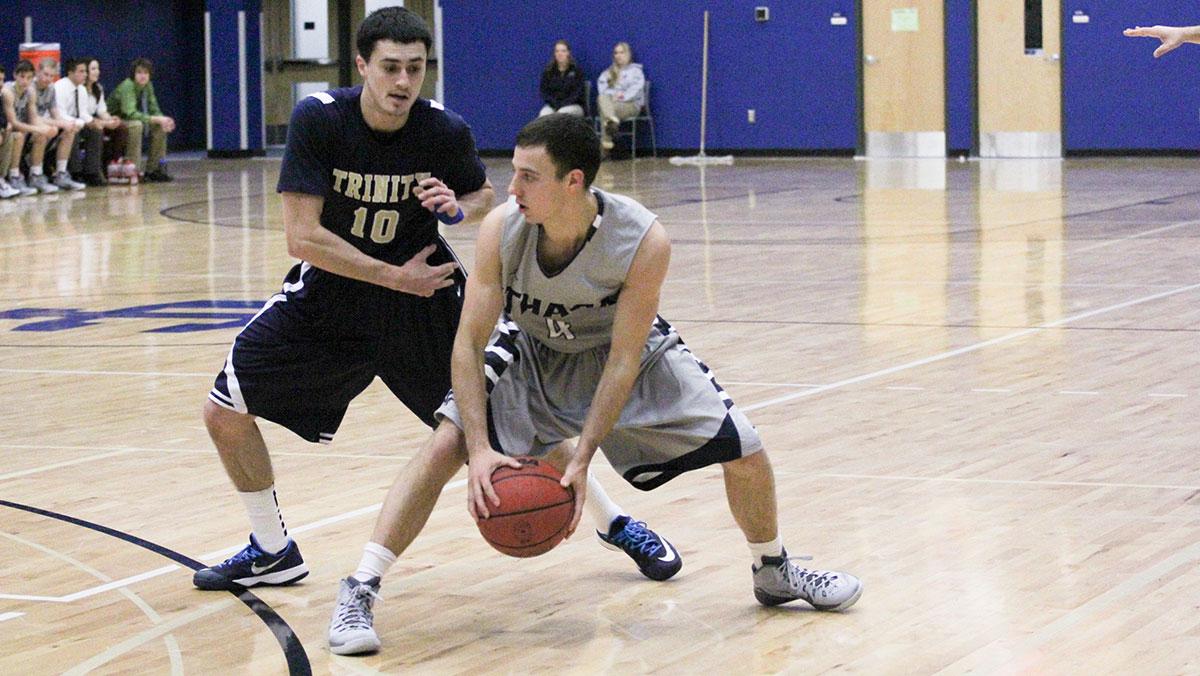 After recording a 21–9 record and an appearance in the Sweet 16, the success the men’s basketball team experienced in 2012 can be largely attributed to the five seniors. Last year, the team had just three seniors and missed the playoffs after a disappointing 7–18 finish. This season, the Blue and Gold are even more shorthanded when it comes to upperclassmen. The only seniors on the team, guard Max Masucci and forward Keefe Gitto, are currently serving as co-captains for this youthful squad.

The last time the men’s basketball team had only two seniors was in 2010. That team showed that success does not necessarily correlate with age, as the young squad finished with a 20–7 record and reached the NCAA championship tournament regional semifinal. The current men’s team is off to a slow start, however, with a 1–5 record, but Masucci said he is not concerned with the team’s record in the young season.

“We control everything we do and we have to make adjustments to get better each day,” Masucci said. “We’re not worried about the record right now. How we do in conference play is more important.”

Masucci is the most veteran player on the squad after coming in as a freshman in 2011. To date, he has scored 304 total points, 59 career 3-pointers and is shooting 38 percent from beyond the arc. Masucci said there is no heightened stress being named captain for this year, and as a senior he is up for the challenge.

“I don’t feel any added pressure because it’s a role I’ve embraced and wanted to do,” Masucci said. “I couldn’t see myself being anything but a leader on this team.”

Gitto, however, has only one full season under his belt on the team after transferring from Bryant University prior to the 2013–14 season. In his junior campaign, Gitto averaged seven points a game and had 110 rebounds, second highest on the team. Although Gitto has not been in the program for as long as Masucci, he said he appreciates the seniors of past seasons for preparing him to be a captain now.

“Last year, we had great senior captains who showed me how to be an Ithaca Bomber,” Gitto said. “Although I wasn’t a part of the Sweet 16 team two years ago, the seniors’ influence is still echoed throughout the locker room today.”

Head coach Jim Mullins said he knows he has a very talented but young team. He said he is relying on Masucci and Gitto to teach the underclassmen how to play Bomber basketball, which he described as playing as one cohesive unit.

“The biggest responsibility of the captain is to get everyone accustomed to the system,” Mullins said. “They also have to make sacrifices for the good of the team and act as an intermediate between the players and coaches.”

Masucci has served as more than just a liaison between players and coaches. He said he believes being a captain extends past the basketball realm and has helped the underclassmen get acquainted with their transition to the college.

“Being a captain stretches beyond the boundaries of the court. It stretches into academics, clubs and life,” Masucci said. “I assist players outside of class as a teaching assistant, encourage them to join student organizations and remind them that they’re always representing Ithaca College basketball.”

In particular, Masucci has taken sophomore guard Joe Masino under his wing. Masino is a sharpshooter from beyond the arc — averaging 32 percent from the 3-point line — who can dribble and distribute the ball, much like Masucci, who said it is only natural that the two have become so close within the past year. Masucci said he sees the “Mas to Mas” connection — a play off of the pair’s similar last names — as a couple of shooters who are confident in every shot they take. However, Masino said the bond has much more weight.

“I don’t know if Max knows it, but I definitely see him as an older brother,” Masino said. “He has introduced me to all his friends, helped me in a lot of my classes and overall just helped me feel comfortable here at Ithaca College.”

Gitto said he also transitioned into the college rather smoothly. But he added that he came here for a reason, and now it is time to lead, especially since his team is off to a slow start.

“I just want to win, that’s what I came here for,” Gitto said. “We have the talent, now it’s just a matter of putting everything together.”