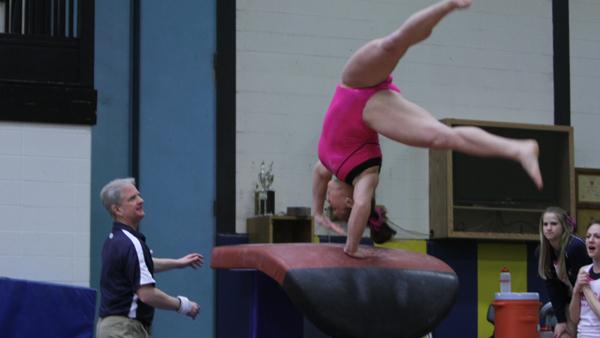 Small changes have made a big difference in the gymnastics practice room. Adjustments to the setup of Ben Light Gymnasium have allowed for more space to practice the vault, and the team has responded positively to the arrangement.

After a slow start, Bombers’ scores have risen each meet. At the first meet of the year, the team posted a score barely above 177. Their improvements have culminated with a win Feb. 16 in the Harriet Marranca Memorial Invitational, where the South Hill squad scored 186.025, edging out last year’s national champion, SUNY-Brockport.

Last semester, Head Coach Rick Suddaby redesigned the space to maximize the room the gymnasts had to practice. Suddaby said that the redesign was a long time in the making.

“It has been a long-standing motive, because our ability to properly train in vaulting, for 20 years, has been behind everybody else,” Suddaby said. “When I heard [from the school] there were not going to be renovations, we looked at the options with the opening of the A&E Center and with the other teams being out of there, and we built a design and moved forward with it.”

After moving the vault, the gym became more open and allowed the other equipment to shift around the gym for more training purposes. Previously, the South Hill squad could not train some other exercises at the same time as the vault. Now, sophomore Valerie Cohen said, the ability to train for all of the events at once is making for an all-around better team.

“The results are huge, because the fact that we can train pit bars and pit tumbling on the same day as vault makes our training a lot more efficient and increases our skills on all three events,” Cohen said.

Before the gym was renovated, the gymnasts could only vault two days a week because of the limited space offered to the team. Because the vault exercise requires such a large plot of space, the previous design forced the gymnasts to spread out a narrow mat that sent them into the wrestlers’ half of the gym, which made the wrestlers unable to practice.

Senior Chelsea Robie said the vault setup caused both a training issue and a safety risk, but with the changes, the squad is able to avoid the collisions and hard falls they had in the past.

“The way we used to vault made it set up that the vault was right up against the wall,” she said. “People would vault, and if they went crooked, they would run right into the wall, so to learn new skills, we would have to risk our safety.”

The addition of new safety pits in this area has allowed the team to try out new vaults they were unable to test before. With the new strength and stability of the mats combined with more training and safety, the team has increased its scores multiple times on vault during competition season.

This past weekend, the Bombers posted a 46.475 total on vault, putting them eight-tenths above their season average. With the addition of a 46.675 the week before at the Harriet Marranca Invitational, the squad has surpassed last season’s vault average two weeks in a row.

Graduate student and co-captain Tiffany Grube said this opportunity has raised the start values for competition as well as given the freshman the training they need to be able to compete.

With constant improvement and scores peaking on each event in the past two weeks, the Bombers are the strongest they have been all season going into their final meet. With the progress they have seen thus far, especially on vault, Grube said the hope for more gym renovations in the future promises a strong future for the team.

“With the talk of renovations to the Hill Center and our gym possibly expanding, it could be a huge benefit when recruiting,” she said. “We will also have a lot more space and hopefully add more equipment to have more fluid practices and safer training for the future.