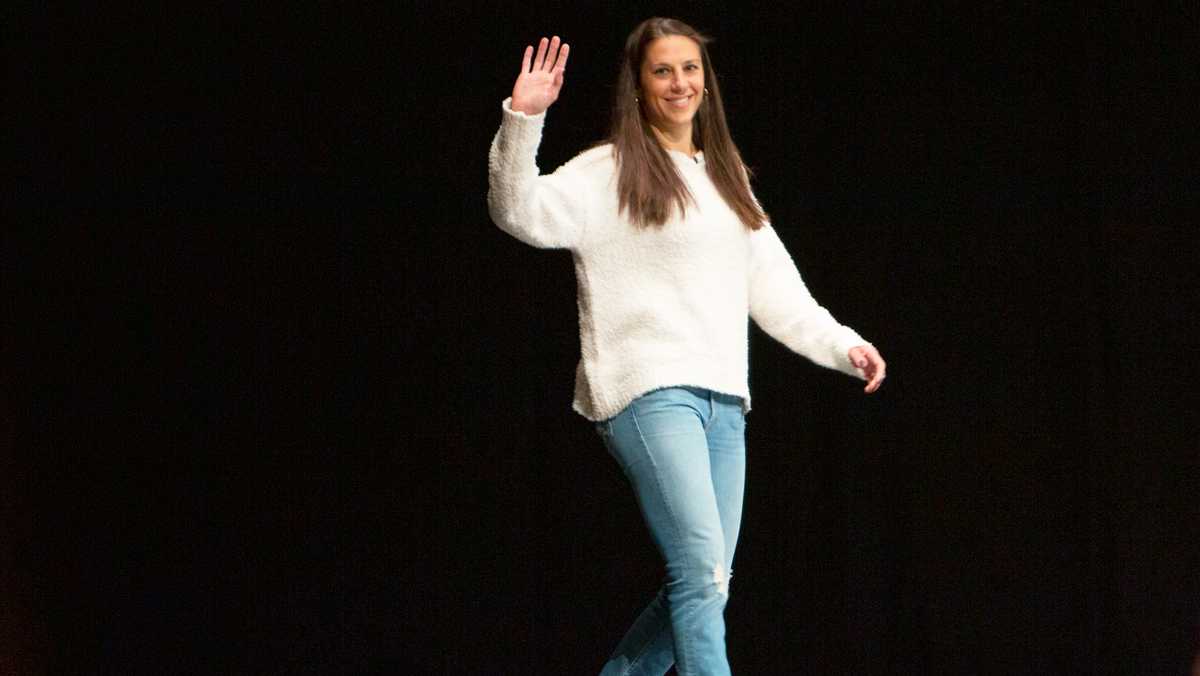 Jill Ruthauser/The Ithacan
Carli Lloyd walks on stage to discuss the path to her successful soccer career and leadership on and off the field Dec. 6 at Cornell University’s Bailey Hall.
By Emily Adams — Sports Editor
Published: December 10, 2019

Professional soccer player Carli Lloyd has won two World Cups and two Olympic gold medals with the United States Women’s National Team. She took her talents off the field and onto the stage Dec. 6 at Cornell University, where she spoke about her career, gender inequality in soccer and her retirement plans.

The talk was arranged by the Cornell University Program Board and moderated by Lawrence Glickman, Stephen and Evalyn Milman Professor in American Studies at Cornell. Glickman teaches a course about sports and politics in U.S. history at the university.

Lloyd began her talk with a chronology of her childhood and pre-professional soccer career. Glickman asked her about experiences referenced in her memoir, “When Nobody Was Watching: My Hard-Fought Journey to the Top of the Soccer World.” Lloyd recalled kicking a soccer ball against a curb thousands of times to practice her shot.

The importance of work ethic was a theme throughout Lloyd’s talk. She said that early in her career, she had poor character and very little drive. However, she said, all changed after she was not chosen for the under-21 national team roster for the 2003 Nordic Cup Tournament. She said she considered quitting soccer but ended up working with James Galanis, a local trainer who changed her mentality

“We sat on the bleachers and he talked to me about my goals, my dreams,” Lloyd said. “He asked me what I wanted to do for the rest of my life, and I said ‘I want to play.’ He said that what makes all these amazing athletes special is the work when nobody is watching, and that’s now the title of my book.”

The event was attended by several local youth soccer clubs, the Cornell women’s soccer team, and members of the Ithaca College women’s soccer team, including head coach Mindy Quigg. Quigg said she will be able to apply many aspects of Lloyd’s philosophies to her own team.

“The biggest takeaway that I can relay to the women on my team is that I often hear a lot of talk about confidence,” Quigg said. “She was saying that confidence is all about preparation — the work you do when no one is watching — so if you’re not confident, prepare harder and train harder.”

Many nonathletes also came to see Lloyd speak, including Ithaca College junior Maddie Jacobs. Jacobs said she especially enjoyed hearing the Lloyd discuss the challenges and failures behind her success.

“You see her as a player in the media, but we kind of got an insight into her personal life and struggles and how she deals with that,” she said. “That was really cool because you don’t really get to see that in interviews. It’s nice seeing that there’s a person to this crazy superstar.”

Lloyd also addressed more political issues of sports, from the financial demands of competing to gender inequality. Lloyd grew up in Delran, New Jersey, and she said her family did not have much money when she was competing on the youth soccer circuit. Lloyd said it can be challenging for lower-income families to support a child playing high-level sports.

“The most important thing is that you create your own environment,” she said. “You could pay to play on the best team and have the best trainer and the best cleats, but that isn’t going to propel you to become successful. You have to have that passion, and it is costly, but you have to want it.”

In her professional career, Lloyd has been a strong advocate for equal treatment of women in sports. In 2016, she wrote an op-ed for The New York Times after she and four teammates filed a wage-discrimination complaint against U.S. Soccer. She said one of the biggest challenges has been the demands on her and her female colleagues outside of competition.

“None of us on the national team need another job, but we have to work 20 times harder off the field, which shouldn’t be the case,” Lloyd said. “We’re trying to take on every opportunity we can and get ourselves out there. It’s a whole different world than the men’s game, and it’s hard to balance a lot of things off the field.”

Junior Emma Fruhling, a goalkeeper for the Bombers’ women’s soccer team, said it was exciting to hear Lloyd speak because she considers her a role model.

“Carli Lloyd has always been a big inspiration for me,” Fruhling said. “She’s someone who’s drive and passion has always been very clear from the start. As a soccer player, hearing her speak and hearing about her journey is just really inspiring and can help you in any path of life.”