Softball goes three-for-four on the weekend at home 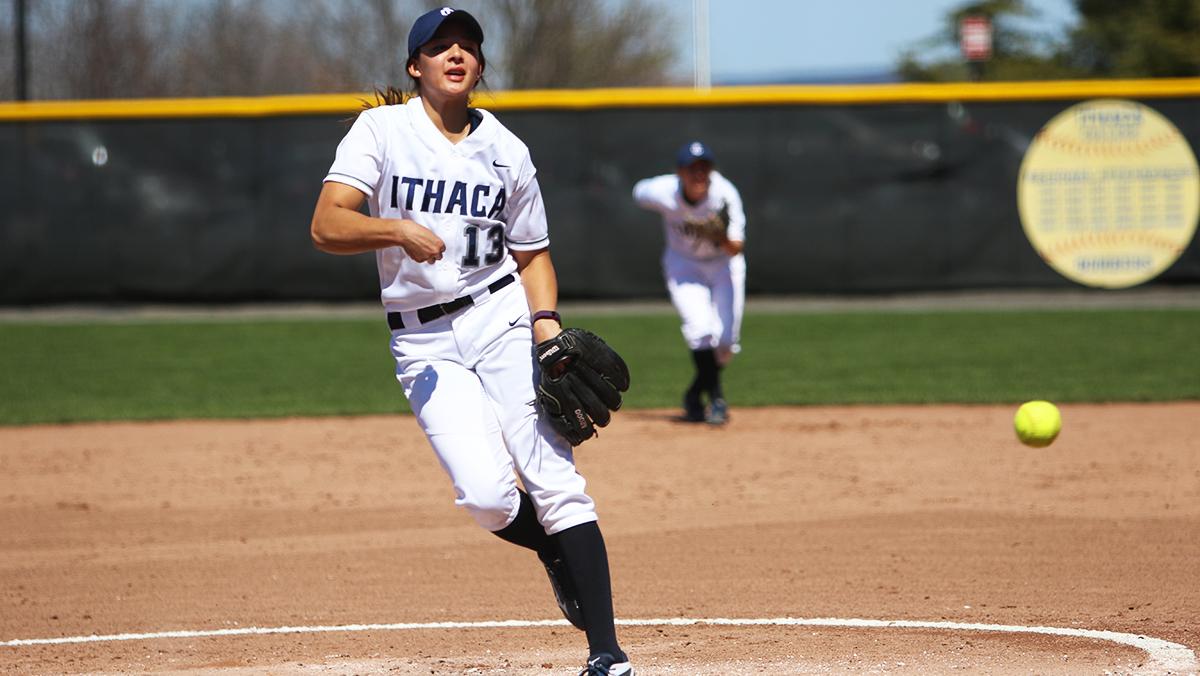 The Bombers won their fourth straight game when they beat Nazareth in game one of the double header 5–2. The Blue and Gold rode the momentum from their victory into the second game, defeating the Golden Flyers 2–0.

The Bombers fell behind early in their Empire 8 home opener, letting up two runs to the Golden Flyers in the second inning. The South Hill squad eventually found their bats, tying the game in the third inning.

The Bombers took the lead in the fifth inning thanks to hits by sophomore first baseman Alex Wright and freshman utility player Shannon Grage. The Blue and Gold tacked on an insurance run in the sixth inning to take the lead 5–2.

Sophomore pitcher Haley Congdon picked up her sixth win of the season, going the full seven innings while letting up only three hits and two runs, neither of which were earned. She also picked up six strikeouts.

The Bombers reversed the role from the first game, scoring first in the second inning thanks to freshman pitcher Emily Holden’s RBI double.

The Blue and Gold scored again in the fourth inning from sophomore shortstop Ellie Murray’s RBI single to score freshman centerfielder Abby Shields. The game was 2-0 at that point and would remain that way for the rest of the game.

Holden picked up her fourth win of the season, going seven scoreless innings with only four hits allowed while collecting a hit of her own at the plate.

The Bombers moved to 11–5 on the season after sweeping the doubleheader. The wins also gave Bombers head coach Deb Pallozi her 800th and 801st career wins.

The South Hill squad continued their weekend, taking on St. John Fisher College in a doubleheader. The Bombers squeaked past the Cardinals 1-0 in the series opener before dropping the second game 8-0.

To start the day, the Bombers scored the game’s alone run in the bottom of the first, thanks to sophomore third baseman Vanessa Brown’s sacrifice fly ball to score junior outfielder Allie Colleran, who had led off the inning with a walk.

The rest of the game was a pitching battle, with Condon taking on the Cardinals’ junior Lindsey Thayer. Each team mustered only three hits, but Condon came away with the victory.

After pitching a complete game the day before, Condon went five scoreless innings before Holden pitched an inning of relief and Grage picked up her first save of the season.

The Bombers looked to repeat what they had done the day before and keep the momentum on their side. They were unable to do so, dropping the second match 8–0.

The Cardinals wasted no time getting on the board, having two of their first three batters reach base safely before sophomore first baseman Sarah Kubik drove them all home with a three-run home run.

Despite struggling at first, Grage continued to pitch for the Bombers. She pitched into the sixth inning before the Cardinals added on three more runs. Holden and Shields both pitched in relief for Grage, but let up a combined two runs in one inning pitched.

Grage was charged with the loss, letting up 12 hits while allowing six runs to come across over five complete innings.

After picking up the loss in the first game, Thayer picked up her 11th win of the season, pitching five scoreless innings while letting up only two hits and fanning 12 Bombers batters.

The Blue and Gold return to action at 3 p.m. and 5 p.m. April 12 in Alfred, New York to take on the Alfred University Saxons in a conference battle between the top two Empire 8 teams.