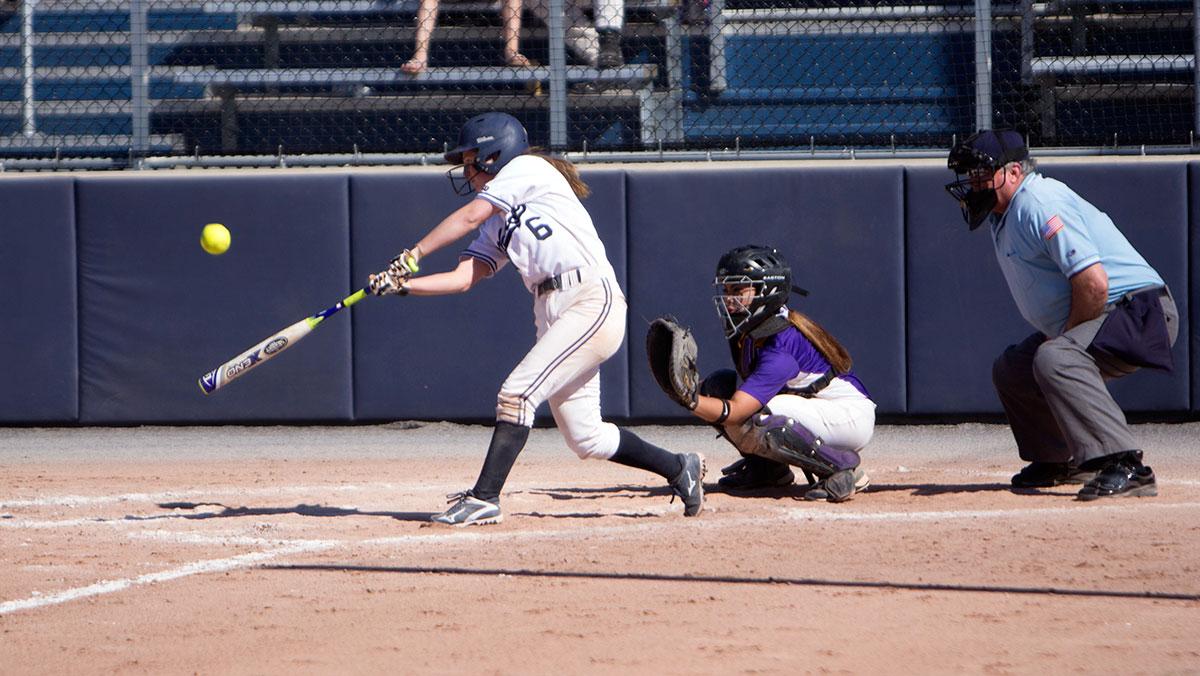 After splitting a doubleheader against SUNY Oneonta on April 13, the Ithaca College softball team returned to action at Kostrinsky Field against Empire 8 rival Houghton College and Alfred University on April 15–16. The Bombers entered the weekend with an undefeated conference record of 4–0 and an overall record of 16–6.

In the first game of a doubleheader against Houghton, sophomore infielder Allie Colleran drew a leadoff walk in the first, then scored on a single by freshman infielder Vanessa Brown who advanced to second on the throw. Brown would be driven in by freshman utility player Alex Wright, giving the Bombers a two-run lead.

In the second, sophomore right fielder Emily Bloom scored on consecutive wild pitches by Highlanders freshman pitcher Kaylee Jentsch. The Bombers would cap their three-run half of the frame with runs by Colleran and freshman second baseman Nikkey Skuraton, who both came around to score after walking. That would end the day for Jentsch, who allowed five runs on five hits and walked four and three wild pitches in her two innings of work.

In the bottom of the fourth, the Bombers continued to take advantage of sloppy pitching, scoring two more runs.

After senior starting pitcher Laura Quicker worked her way through the top of the fifth, the Bombers ended the game, scoring its eighth run, invoking the mercy rule.

The Bombers continued to rally into the second game after closing out the first win of the day.

In the second game, in the bottom of the second, the Bombers totaled four runs. Three came from Skuraton, who hit a bases clearing double.

The South Hill squad would add one more in the bottom of the third by a single from senior outfielder Erin McQuillan scoring senior catcher Kelly Robichaud.

Sophomore pitcher Allison Macari surrendered the only run in the fourth, giving up a solo home run narrowing the lead to 5–1.

In the bottom of the fourth, the Bombers would add one more run. In the bottom of the fifth, three straight singles by freshman catcher Samantha Velez, freshman infielder Hannah Anderson and McQuillan would add another run for the Blue and Gold, making it 7–1 after five. Brown continued her hot day at the plate in the bottom of the sixth and added her fifth RBI of the day. Senior infielder Casey Gavin would then end the game, slapping a single up the middle to get Brown in from third, for the final run in the 9–1 win.

Brown, who was 5–8 over the two games, was impressed by the way the team bounced back after the loss to SUNY Oneonta.

“We came out with a lot of energy,” Brown said. “We know we have a big game tomorrow. So we needed to bounce back from the loss, and we did.”

Even though the offense ruled the day, it was the superior pitching of Quicker and Macari that made headlines. Quicker credited the rapport she and her catchers, sophomore Hannah Peters and Robichaud, had for her success.

“We moved the ball in and out of the strike zone, keeping the hitters off balance,” Quicker said. “This was a total team effort too because the defense was so solid.”

Macari echoed the statements of her fellow mound mate and offered a look into what the Bombers’ mindset was heading into the day.

“I hit my spots really well,” Macari said. “We didn’t take Houghton lightly. Every game against teams in the E8 moves us closer to our goal of going undefeated in the conference, so that’s what we’re focused on.”

In its second doubleheader of the weekend against Alfred University, the Bombers added two more wins.

Alfred senior catcher Nora Passuite hit a single in the third, scoring teammate freshman pitcher/outfielder Dominique D’Andrea. The Bombers quickly retaliated and picked up three runs in the bottom of the inning. Wright reached base on a fielder’s choice, scoring Skuraton in the process. Gavin and Anderson followed up with back to back singles to bring in the Bombers’ final two runs of the game. The Blue and Gold went on to win 4–1.

Quicker pitched another complete game, and gave up three hits and eight strikeouts in all seven innings of work.

In the second game, the Bombers scored quickly in the first inning. One run was scored off a single from Gavin and a ground out from Wright brought in another.

The Bombers put two more up on the board before the Saxons answered. In the third, Gavin reached on an error, scoring Skuraton and a fly out from Robichaud scored Brown from third base.

Macari gave up one run in the sixth inning, to put the Bombers up only by three. Macari pitched a complete game and earned the W in the Bombers’ second win of the day.

The Bombers will be on the road for the next doubleheader, against Elmira College beginning at 3 p.m. April 18.