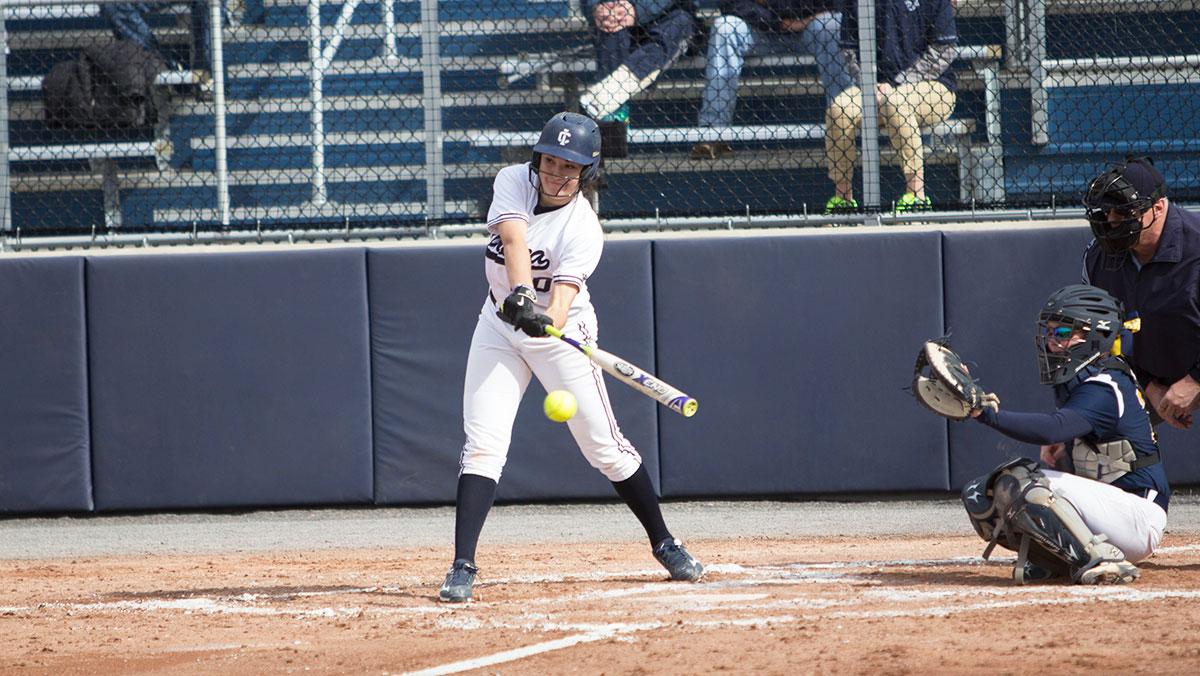 CAITIE IHRIG/THE ITHACAN
Freshman Alex Wright swings at a pitch in a doubleheader against the University of Rochester March 30 at Kostrinsky Field.
By Casey Koenig — Contributing Writer
Published: March 31, 2016

The Ithaca College women’s softball team won both its games against the University of Rochester on March 30 at Kostrinsky Field.

They won 7–2 in the first game. The Bombers came back in the third inning after freshmen infielders Nikkey Skuraton and Vanessa Brown each hit a solo homerun to take a 2–1 lead. Rochester then scored again to make it 2–2 in the fourth inning, but when the Bombers got up to bat, they took the lead right back when freshman infielder Hannah Anderson walked and sophomore outfielder Emily Bloom homered to bring both of them in.

In the fifth inning, Brown singled, and senior catcher Kelly Robichaud belted a homer to make the score 6–2, with senior infielder Casey Gavin immediately doing the same with a solo shot right after to seal the Bombers’ 7–2 win. Senior pitcher Laura Quicker pitched seven solid innings and improved her record to 6–2 on the season. She allowed two runs on four hits and struck out six.

After being tied 1–1 after two innings, the Bombers dominated and won in a 9–1 mercy rule in game two. At the bottom of the third inning, Anderson and Gavin each got an RBI to make the score 3–1 in the favor of the Bombers.

The Bombers took off running in the fourth when they got four runs on four hits to extend their lead to six. This happened because of an error by Rochester that allowed Skuraton to reach base. She scored when Robichaud belted a double to center field. Gavin singled and Anderson got a two run double and Bloom singled in an additional run.

The Bombers took the rest of the game at the bottom of the fifth two runs on four hits. Freshman utility Alex Wright and Gavin each got the RBIs.

Senior pitcher Allison Macari got the win, improving her record to 2–2.

“We played well. We hit the ball hard,” head coach Deb Pallozzi said. “The pitching in both games was very very very solid.”

A quote was misattributed and has been removed.